Battle Of The Begums

With the Awami League government hitting the Islamist formations decisively during its tenure, the Islamists and their BNP backers are determined to make one last attempt to derail the polls. 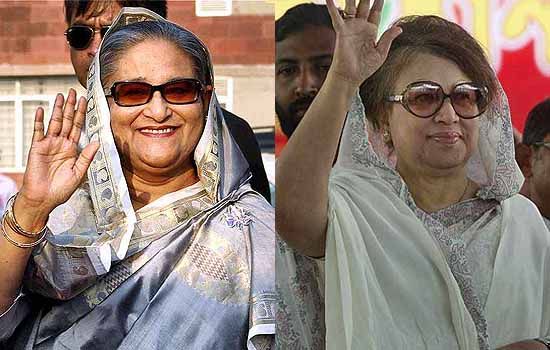 Paving the way for the constitution of an “all-party” interim government to oversee the next parliamentary elections, all 52 ministers in the Awami League (AL)-led Begum Sheikh Hasina Wajed government submitted their resignations on November 11, 2013. Subsequently, on November 21, 2013, a 29-member interim government was formed under Prime Minister Hasina. 28 other ministers (including 21 cabinet ministers and seven state ministers) were also inducted. All the 28 ministers are members of the Grand Alliance which was formed under AL leadership in December 2008, after the last parliamentary elections. While 20 ministers have been re-inducted, eight new faces, including Anisul Islam Mahmud, Rahul Amin Hawlader, Rawshan Ershad, Mujibul Hague Chunnu, Salma Islam of the Jatiya Party (JP); Amir Hossain Amu and Tofail Ahmed of the AL; and Rashed Khan Menon of the Workers Party (WP).

Hasina later gave an assurance that the ministers of the interim government would not make any policy decisions, and would only engage in 'routine work' during the election period, adding, “I want to assure you [people and the opposition] that the elections will be held in a free and fair manner. I urge the opposition leader to join the elections and the people will decide who assumes power.” Prime Minister Hasina also stated that President Abdul Hamid had advised her to lead the interim government.

This move, however, has been vehemently opposed by the Begum Khaleda Zia's Bangladesh Nationalist Party (BNP) and the 18-party opposition alliance she heads, which includes the Jamaat-e-Islami (JeI) and other Islamist radicals. The alliance has been demanding a non-party caretaker government (CG) on the pattern of arrangements under which earlier elections were held. In June 2011, Parliament had abolished the non-party CG system, declaring the 15-year-old constitutional provision illegal.

While the BNP-led alliance has opposed the formation of the interim government and is planning its strategy of response, the election commission (EC), on November 25, 2013, announced that the 10th general election would be held on January 5, 2014. Chief Election Commissioner (CEC) Kazi Rakibuddin Ahmed made the announcement in an address to the nation on state radio and television and appealed to all political parties to contest the election, assuring them of taking all necessary measures, including deployment of the armed forces, to ensure a free and fair election. According to the schedule, the deadline for submission of nomination papers is December 2, 2013.

Since the AL led-government had completed its tenure on October 24, 2013, Article 123 of the Constitution of Bangladesh required general elections to be held within 90 days, that is, before January 24, 2014.

On November 25, 2013, the opposition announced a 48-hour countrywide blockade from November 26, 2013. In a press briefing arranged minutes after the announcement of the election schedule, BNP acting secretary general, Mirza Fakhrul Islam, called on the EC to postpone the polls schedule until a consensus on the arrangements for a non-party CG was reached among the political parties. BNP spokesman Mirza Fakhrul Islam Alamgir declared, "We reject the election schedule."

Stunned by the announcement and realizing that their attempts to obstruct the announcement of the polls had failed, the opposition alliance intensified its 'street protests' unleashing wave of disruptive demonstrations and violence in the hope that this would force the government to rethink its position. According to partial data compiled by the South Asia Terrorism Portal (SATP), as many as 25 people, including 20 civilians, four JeI and its student wing Islami Chhatra Shibir (ICS) cadres and one trooper of Border Guard Bangladesh (BGB) have been killed in street violence since the announcement of the poll schedule (all data till December 1, 2013).

The present disturbances, however, are only an intensification of near-continuous disruptions since January 21, 2013, when the first verdict in the trials for the War Crimes of 1971 was announced. Since then, the country has recorded at least 267 fatalities, including 157 civilians, 96 JeI-ICS cadres and 14 Security Force (SF) personnel, in violence unleashed by the Islamist formations backed by the BNP-JeI combine.

Meanwhile, on November 26, 2013, the Communist Party of Bangladesh (CPB), at a press conference at its central office in Dhaka, and the Democratic Left Alliance (DLA), a combine of eight left-leaning political parties, at another press conference at the Nirmal Sen Auditorium in Dhaka city, rejected the announced election schedule. The CPB President Mujahidul Islam Selim declared, "CPB is rejecting the election schedule and will not take part in any one-sided election." Saiful Huq, the DLA coordinator, also rejected the election schedule on the grounds that the process would encourage a 'unilateral election'. Similarly, at a Press Conference in Dhaka city’s Mukti Bhaban on November 28, 2013, Socialist Party of Bangladesh (SPB) General Secretary Khalequzzaman asserted, “Since we believe that a one-sided election under this EC will escalate the present crises rather than resolve it, the CPB-SPB will not take part in the election.”

On November 28, 2013, amid fresh political violence and uncertainty about the upcoming general election, the EC conceded that the January 5 polls could be postponed if consensus is forged by the country's feuding political parties. CEC Kazi Rakibuddin Kazi Rakibuddin Ahmed, when asked if the panel could revise the poll schedule, observed, "Everything is possible if they (political parties) reach a settlement in the people's interest."

Any consensus between Bangladesh's polarized political parties is, however, highly unlikely. Shahriar Kabir, a war crimes researcher, thus noted, “The body language of Khaleda made it clear that she is not interested in a resolution and the reason is she is dictated to by Jamaat-e-Islami, which wants to push the country towards a civil war.” On the other hand, the Sheikh Hasina-led government is determined to hold elections on time. While giving an introductory speech at the meeting of the Awami League Parliamentary Board (ALPB) at her Dhanmondi office in Dhaka city on November 28, 2013, Sheikh Hasina urged the people to be prepared to vote, saying that the next parliamentary elections would be held at the "right time" and the people would elect their representatives according to their wishes. Referring to Khaleda Zia, she declared that the Opposition leader was "killing innocent people in the streets" and pushing the country into complete anarchy, even while she kept herself aloof from the street-agitation and lived a "lavish life".

Bangladesh had witnessed a remarkably violence-free poll on December 29, 2008, when the AL secured a landslide victory, with 230 of a total of 300 seats in the Jatiya Sangsad (National Parliament). The AL subsequently formed the Grand Alliance along with the JP, which accounted for 27 seats in the Jatiya Sangsad, and with ‘others’ who accounted for five seats. The BNP, which had won 193 seats in the 2001 Elections, collapsed to a strength of just 29 seats, while its principal ally, JeI, was reduced from a strength of 17 seats to two.

With the AL government hitting the Islamist formations decisively during its tenure, the Islamists and their BNP backers are determined to make one last attempt to derail the polls. Inevitably, in what is being viewed as a virtual battle for survival on both sides of the political spectrum, Bangladesh is heading towards a violent election. The BNP-JeI combine has already made its intention clear, taking the fight into the streets, and rejecting the very possibility of any political discourse for consensus formation. Unsurprisingly, the Sheikh Hasina government has also hunkered down, to take all necessary measures to enforce a peaceful polling process.