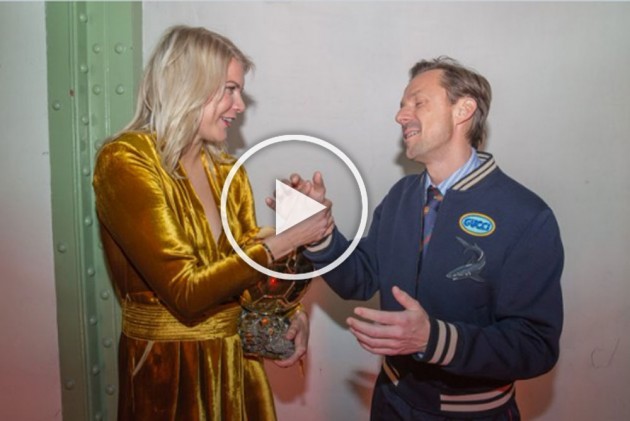 History was made early Tuesday morning In Paris with Ada Hegerberg becoming the first winner of the Ballon d'Or award. But the Norwegian footballer was presented with an awkward question live on stage by the host Martin Solveig, which ruined the moment. The famed DJ wanted to know if the world's best woman football player can actually twerk.

Hegerberg, 23, appeared embarrassed when asked by Solveig if she wanted to dance in celebration and “knew how to twerk”. She refused and walked away before agreeing to dance to another song with David Ginola, who co-hosted the event with Solveig.

The episode stirred up a huge debate on the social media, with many blaming the French DJ for making a sexist comment. He later apologised but the damage was already done.

Sincere apologies to the one I may have offended. My point was : I don’t invite women to twerk but dance on a Sinatra song. Watch the full sequence People who have followed me for 20 years know how respectful I am especially with women pic.twitter.com/pnZX8qvl4R

I explained to @AdaStolsmo the buzz and she told me she understood it was a joke. Nevertheless my apologies to anyone who may have been offended. Most importantly congratulations to Ada pic.twitter.com/DATdg0TfQk

What Are Ballon d'Or And FIFA Best Awards?

Ballon d'Or Winner Leaked, And We Have A First-Time Winner

Hegerberg said that Solveig apologised to her and she "wasn’t upset."

Ballon d’Or winner @AdaStolsmo says she wasn’t upset when French DJ Martin Solveig asked her if she could twerk at the award ceremony in Paris. Apologies for my framing at the beginning pic.twitter.com/LFzEoCccRo

It was totally berserk
To ask Ada to twerk
But she said no
Which goes to show
She has class & he’s a Jerk#BallonDor #AdaHegerberg pic.twitter.com/yn4p0nMRGR

Then giving an unbelievable speech about how big this is for women's football.

Then asking little girls to believe in themselves.

THEN being asked to twerk. Fuck off dude. pic.twitter.com/MkbL5KZalD

This video of Ada Hegerberg is worth your time. This is why she is the first female winner of the Ballon D'Or. Sadly the video of the goon asking her to twerk will be watched more than this. pic.twitter.com/HxNTDrivrz

Lyon striker Ada Hegerberg, first female Ballon D'Or winner after scoring over 250 career goals at the age 23, asked to twerk on stage in front of footballing giants and the public watching. Disgusting and really ruined her moment she deserved. Poor. pic.twitter.com/FSz0ozz2T4

Imagine working hard for your entire life, becoming a one of the best professional female footballer at the age of 23, being the first EVER person to win the female Ballon d’Or, just to be asked “can you twerk” on television by a man.

Absolute trash: French DJ Martin Solveig asks Ada Hegerberg to twerk after receiving the first women's Ballon d'Or award. (Love her response, though.) This is the crap female athletes deal with on a daily basis around the world.pic.twitter.com/y2TLe3v4u9

• Messi finished 5th
• Neymar not in top 10
• Courtois wining best GK award
• The female Ballon d’Or winner asked if she knew how to twerk by the host.

What a complete mess.

how are you this sexist that you'd think to ask a woman who has just been celebrated for earning the highest individual honor in her sport if she want to twerk?? this is right after making her dance. fuck Martin Solveig. pic.twitter.com/hvRB0YfsOu

Read some of the reactions: