Baduria A Gory Example Of How Social Media Antagonism Can Bleed Into Real World, Kill Real People, And Transform An Area

A fact-finding team visits the paddy-fringed parts of Baduria-Basirhat area of Bengal that was wrought by violence sparked by a Facebook post. 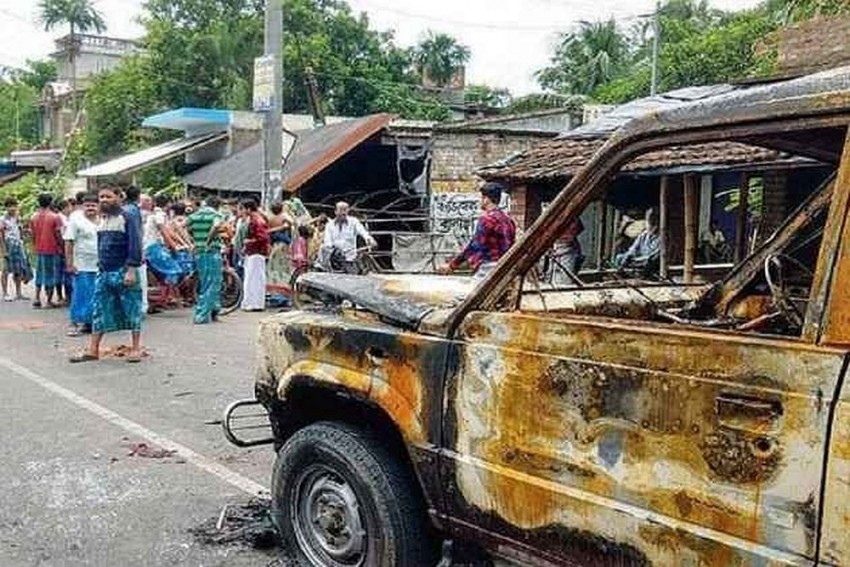 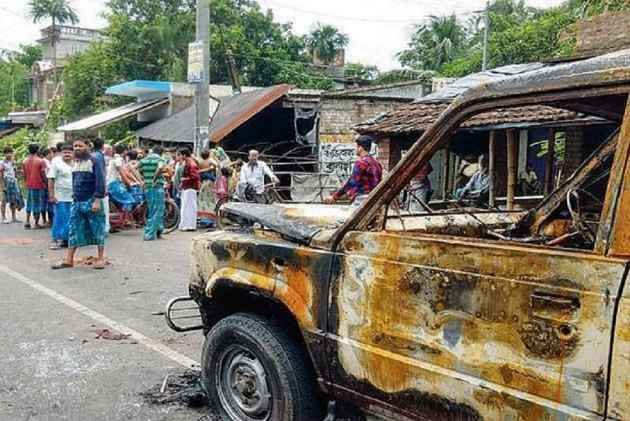 Retracing the arc of violence, one is struck by how social upsurges can be similar to impersonal elemental forces, like cyclones or floods. In the end, both leave a trail of innocents dead. On July 4, Arafat Gharami went missing. His was not the tale of an absconding criminal, but simply that of a tailor who made the mistake of visiting Baduria on that fateful day. It was a time when the ghost of 1946 was stalking this part of North 24 Parganas district, West Bengal.

Arafat was not alone. Rejaul was knifed through his skull and had his legs broken, not because he was a thief or rapist on the prowl. He was only a fisherman on his way home. On July 5, Kartik Ghosh was attacked. Again, he was simply a small-time businessman dealing in poultry—he just happened to be walking through an inflamed Muslim locality wearing a rudraksha. In all cases, it’s just the religious denomination that mattered, as is evident from the testimonies of Rejaul and of Abu Talib, a tailor. Kartik Ghosh is beyond any testimony; he lies dead.

Visiting the Baduria-Basirhat area nearly two months later, and talking to a wide range of witnesses and actual dramatis personae, this writer found the air still wrought by the shock that had coursed through this paddy-fringed part of Bengal. Excavating the sequence of events was not easy—testimonies still tend to vary along Hindu-Muslim lines, and it’s clear that the recent spurt of right-wing politics has befouled community relations to some degree, despite this being an area marked by an uncommon level of amity at the personal level.

It’s remarkable how much the antagonisms that play out on social media can bleed into the real world, kill real people, and transform an area. The BJP’s victory in the 2014 general election had brought to a head the online skirmishes that had been on for years—it signalled the beginning of a new, intensive phase of crass mud-slinging in the virtual world involving Islam, its prophet and Allah. Memes are weaponised and deployed by both sides, key components of the online arsenal. And every assault provokes an equal and opposite reaction. Moderate elements on both sides are unable to stanch this blood-letting, and bring a measure of sanity, the way they sometimes can in times of real violence—as happened in Baduria too. So the evil abides, and from time to time it stirs up storms.

Even leading up to that day, Bengal had seen a touch of menace and morbidity in the air, but it still required a spark to ignite—a spark that a 17-year-old schoolboy named Souvik Sarkar in Rudrapur village was apparently happy to provide. This is how the events played out, as gathered from various testimonies. On July 2, Souvik uploaded an offensive meme to his Facebook page—“filthy” was a word those who saw it used. The very same day, a crowd of Muslims gathered outside his uncle’s house, where he lives, to demand an on-camera apology that they wanted to upload to Facebook. They even demanded that Souvik be handed over to them.

Fortunately, good sense prevailed on account of efforts of people from both communities, and Souvik was picked up by the police at 3 am without further incident. However, on July 3 afternoon, another mob appeared and attempted to set fire to Souvik’s uncle’s house. Again, fortunately, the only casualty left behind was a burnt tyre. But blood was going to be spilled elsewhere. And towns miles away from the epicentre would be convulsed by angry Muslim crowds protesting the blasphemous meme, once word of it spread. Roadblocks and bursts of arson followed.

One fact stands out: the Muslim mob of July 3, from all appearances, comprised of people who were not local. The Muslim owner of a nearby carpentry shop and a Hindu employee of his both attest that they did not recognise anyone in the mob. This implies they were not even from nearby villages. (Even Srinibas Das, vice-president of the Basirhat organisational district of the BJP, says they were not locals.) The witnesses also claim they heard people speaking in Hindi as well as Bengali. This second mob would also strain the sinews of the police and require far more effort to contain.

When the Muslim carpenter accosted the crowd and asked them to leave, as it was a local or “para” problem that did not concern them, he was chased right into his home and castigated for not being a “true Muslim”. This happened in the presence of the police, who simply chided the man and advised him to look after his own safety. Interestingly, in the real rioting that ensued over the next couple of days, the Hindu victims invariably identified their assailants as local Muslims, whereas Muslims victims always suggested their assailants were not local.

Not every spat on social media spirals into violence on the streets, but it did in Rudrapur—and then spiralled far beyond. How did a single Photoshop image stir up such a tsunami, even if it was meant to provoke? For, so many of these are floating around all the time. Why this one? The state agencies seem unable or unwilling to solve the puzzle. The mysterious provenance of the mob is only one among the many curious elements here.

After Souvik’s arrest, the police also apprehended one Pritam Pal, apparently a friend and classmate of Souvik’s. The latter’s family claims it was Pritam who posted the controversial meme on Souvik’s timeline as he knew the password, and also state that Souvik had not been using that particular Facebook ID for very long. Now, various people who shared the meme after Souvik posted it have also been arrested, but it’s a wonder why cyber police have not yet been able to pinpoint the real source of the meme, whether or not it originated on Souvik’s FB wall.

Much has been written about Souvik being a minor, and the probability of his having been tricked into engaging in inflammatory behaviour. A brief background may be relevant here. Souvik lives with his elder uncle, a police officer. His two other uncles are also in the police. And nobody talks about his father.  The gentleman lives in a nearby village named Chandipur, where he pulled down the microphone from a local mosque after the BJP’s coronation in Delhi in 2014. He also allegedly proceeded to urinate on the mosque wall. Fortunately, this did not lead to any spilt blood. “He was a BJP worker,” say some Hindus, “and he is of unsound mind.”

For their part, the local BJP apparatus reacts to these incidents in a frankly opportunistic manner. Srinibas Das observes nonchalantly that the communal flare-up will help the party reap dividends in 2019. Tapan Debnath, BJP ward member of Moitra Bagan in Basirhat, echoes the sentiments. Two party members arrived at Calcutta R.G. Kar Medical College Hospital to claim the body of Kartik Ghosh, alleging he had been their “local unit president”, only to be dismissed by the son of the deceased. Asit Majumder, president of Basirhat town’s Trinamool Congress unit, says “they want a Hindu shahid murdered by Muslims.” A blasphemous meme, a mysterious mob in a village, ‘Muslim blockade’, arson, a few corpses—the script is perfect for Hindutva.

As a parallel plot, a feud has been playing out between two prominent Muslim clerics, with each blaming the other for the prolonged blockade. Each claims he tried his best to diffuse the tension. But people are unanimous that both had egged on their respective target audience to come out, protest and demand penalty for Souvik.

The two Muslim clerical organisations that have presence in the area are Indian Sunnat al Jamat and Ahle Sunnat al Jamat. Abdul Matin heads the former and runs a madrassa on the outskirts of Basirhat. The latter is headed by Pir Nurul Amin, of the Furfura Sufi order. After the situation spiralled out of the designed trajectory, they are placing blame at each other’s door. There’s talk of a video where the young son of Pir sahib, Khoyeb, is apparently exhorting his followers to bring the town to a standstill till Souvik is punished, though this writer was not able to confirm this.

Meanwhile, small incidents keep things asimmer. The construction of a Ram temple, not a usual Hindu deity in these parts, has begun in a village called Hulo on the outskirts of Basirhat, on a piece of land owned by one Jabbar; this has led to Section 144 being enforced in the area. Little things that seem to have a dark inevitability about them now. Common folk miss the old serenity. Suddenly, the spectre of Elian Mistry and Gopal Pantha seems to be stalking the Bengal countryside.

(The writer is a senior management executive with Coal India and a social activist who was part of a fact-finding team that toured Baduria-Basirhat.)