Welcome back to Iraq—complete with our ever present WMDs—Weapons of Mass deception. 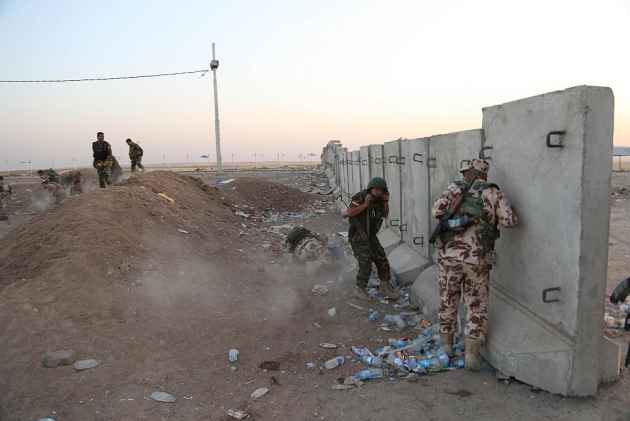 Suddenly, the country we never wanted to have to think about again is back in the news and on our military agenda. So, after a few denials that troops would not, never, and no way be sent, sure ’nuff, U.S, boots are back on the ground, but to play a very different “mission.”

Of course, it’s not combat, assures Secretary of Defence Hagel who was wearing his tennis clothes when he met with GIs. That is, no doubt, why we are pounding that country with bombs again.

To signal that we are not back in the days of the war for Iraqi Freedom, the Pentagon announced its latest humanitarian effort with a tweet, that, in the media world we are now part of, may be the equivalent of a whimper, not a neocon bark.

Once again, we are the good guys charging in to protect and defend, save and rescue. You saw the alarmist stories.

This report was on RTE in Ireland:

“Islamic State militants have killed hundreds of Iraq’s minority Yazidis. They buried some alive and took women as slaves, as US warplanes again bombed the insurgents.”

Human rights minister Mohammed Shia al-Sudani accused the Sunni Muslim insurgents of celebrating what he called a “a vicious atrocity.”

But, then, predictably, there was this coda that put the story in question: “No independent confirmation was available of an event that could increase pressure on Western powers to do more to help.”

It sounded like the story a few weeks back that had ISIS vowing to impose female genital mutilation on every woman they met. Happily, it was later repudiated.

This is not to say that ISIS is not brutal, says Edmund Ghareeb of the Center for Global Peace at American University.

“Where have people been? Certainly some of the recent reporting of the carnage by IS is sensationalized, but their brutality is all too real. But critically, it’s been happening for years in both Iraq and in Syria, where it should have been confronted. In Syria, ancient Christian churches were destroyed, nuns and bishops were kidnapped and priests were killed. In Syria and Iraq, many belonging to different religions, sects and nationalities were killed or forced to flee at the hands of extremists and criminals. This was widely ignored in large part because many in the region and in the west were so focused on attacking the Assad government.

“As for U.S. intervention, the danger is that it may further hurt the Iraqi people and fragment Iraq altogether in the name of this humanitarian intervention.”

Now, we have US troops flying into the mountain that we were told was packed to overflowing with 40,000 desperate refugees facing starvation.

What happened when their savors finally arrived?

“WASHINGTON — A review by U.S. special operations troops of conditions on Iraq’s Mount Sinjar on Wednesday has determined that the conditions of a religious minority seeking refuge there are better than believed and may not require a U.S.-led evacuation, the Pentagon said…

“Based on this assessment the interagency has determined that an evacuation mission is far less likely. Additionally, we will continue to provide humanitarian assistance as needed and will protect U.S. personnel and facilities.”

Comments Jason Ditz on anti-war.com: “The Pentagon is trying to manage the narrative by simply saying the rescue mission “appears unnecessary,” but the fact that it was used to start a US war remains, and the State Department is doubling down, trying to spin the lack of a crisis as vindication of the war.”

Of course, protecting Americans was the first reason cited for this intervention.

So noted the political scientist Michael Brenner, without first noting that the City of Ebril is a major center for U.S. Oil companies and their employees:

“The first thing to say is that we should not confuse purpose with justification. Thursday night, Obama explicitly stated that protection of Americans in Irbil (and implicitly Kurdistan) was the reason for acting against advancing IS forces.

“This is not entirely convincing; evacuation could be a logical alternative. Obviously, there are other aims, inter alia in the immediate, securing access to the air and support facilities we have established at the airport that are crucial to any future operation—including supplying the Peshmerga, e.g. keeping open your military options; to shore up Kurdish morale; to send a message to IS and its allies that any future campaigns in that direction that they contemplate would not be a cakewalk. The President said none of this due to his anxieties about making about making implicit commitments that he is not sure that he could meet.”

What they are doing, says Brenner, is dipping into an old playbook “trying to lay the groundwork for revival of the Sawah Awakening movement among Sunni tribes that had suppressed al-Qaeda in Mesopotamia in 2006-2008.” That effort was based on a vicious counter-insurgency campaign with plenty of pay-offs to our robed “allies.”

Clearly, in the aftermath of the ISIS victories, this manoeuver decisively failed.

No matter, for Obama, it was soon back to the golf course on Martha’s Vineyard, the Kennedy and then Clinton vacation playground he has made his own. Maybe he feels like he can relax because the British and French are shipping in weapons to the US trained Peshmerga, whether they need them or not. After all, they, too, have to promote their “humanitarian” cred.

What’s missing from the media narratives that focus on these forever changing daily incidents, is the deeper reality, that US intervention has not saved Iraq but destroyed it, with more than a million dead, unrepresentative and unaccountable governments and enough war crimes to keep international courts busy for decades.

To understand the depths of the destruction and Iraqi despair, you need the perspective of long time Iraq watchers like The Independent’s Patrick Cockburn whose new book is titled, The end of a country, and the start of a new dark age.

“Iraq has disintegrated. Little is exchanged between its three great communities—Shia, Sunni and Kurd—except gunfire. The outside world hopes that a more inclusive government will change this but it is probably too late.

The main victor in the new war in Iraq is the Islamic State of Iraq and the Levant (Isis) which wants to kill Shia rather than negotiate with them. Iraq is facing a civil war that could be as bloody as anything that we have seen in Syria and could go on for years.”

Who is ultimately responsible for this? We can blame Saddam Hussein, but he’s long gone, or Osama bin Laden who is swimming with the fishes.

More likely, as is most often the case, blame the victims for the crimes, but accepting responsibility is not something that Washington is ever willing or able to do. It seems like we would rather keep arming the “rebels” in Syria, the Israeli army or the Ferguson Mo. Police.

Perhaps that’s why all we hear on TV news shows us a chorus for more killing, to save “civilization” from “those People, “the heathens, of course. Never mind that Iraq was the original home of civilization.

It is summer time and the living is easy. Besides, we have dead celebrities to mourn in these dog days of August.