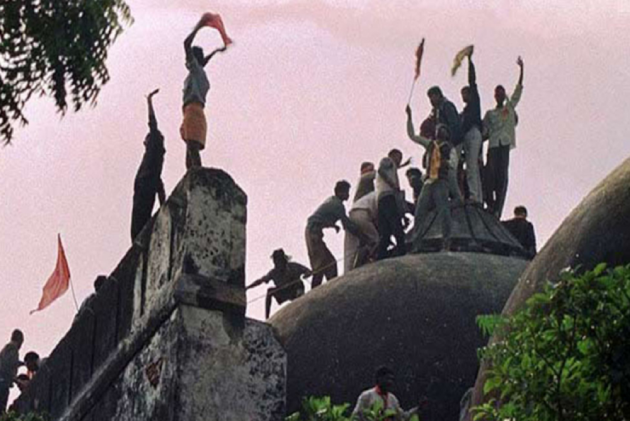 The Babri Masjid was destroyed by the "Hindu Taliban" just like the demolition of the Buddha statue by the Taliban at Bamiyan in Afghanistan, a litigant in the Ayodhya temple-mosque land dispute case told the Supreme Court today.

No law or the Constitution allows destruction of religious structures of any faith, senior advocate Rajeev Dhavan, appearing for the legal heirs of M Siddiq -- one of the original litigants in the case and has died, told a bench of Chief Justice Dipak Misra and Justices Ashok Bhushan and S Abdul Nazeer.

Dhavan also questioned the locus of the Shia Central Waqf Board in the case.

His comments came after the Shia board told the bench that it was willing to donate one-third of the disputed land, which the Allahabad High Court had given to the Muslims, to the Hindu group for "peace, harmony, unity and integrity" in this great country.

The counsel for the Shia Central Waqf Board said they were the claimants of the Muslim share of land at the disputed Ayodhya site, as the Babri Masjid was built by Mir Baki, a Shia Muslim.

"It is a fundamental issue. The Shia Central Waqf Board has decided that for the unity, integrity, peace and harmony of the country, we want to donate the one-third part of land to the Hindu group," the lawyer said.

Dhavan, who initially said he would not respond to innuendos, later countered the Shia board's submissions and said it was way back in 1946 that the Babri Masjid was held to be a Sunni mosque.

"You cannot argue that this (demolition of mosque) was by some miscreants," he said, adding, "What had happened in 1992? The Bamiyan statue was destroyed by the Taliban and this mosque was destroyed by Hindu Taliban. It cannot be done. It should not have been done. No one can do this".

He argued that those who destroyed the mosque should be barred from making any claim since "no one has the right to destroy a mosque or any other religious structures."

"The simple argument is that the fact that a mosque is destroyed does not conclude the argument of right to prayer," he said.

Dhavan said the Shia board's argument that it wanted to donate a share of the land to the Hindu group was like "indulging in a non-existent act of charity".

He also questioned the "intervention" of an Additional Solicitor General (ASG), who was appearing for Uttar Pradesh government, in the matter and said that arguments by the law officer were "uncalled" for.

On July 6, the UP government had told the apex court that some Muslim groups were trying to delay the hearing in the "long-pending" land dispute case by seeking reconsideration of an observation in the 1994 verdict in M Ismail Faruqui case that a mosque was not integral to Islam.

During the arguments today, Dhavan said there was "no delay" on their part in the matter and the UP government was supposed to "remain neutral" in the dispute.

He said that after the Faruqui case verdict, no occasion arose to ask for setting aside or modification of this judgement and, as per this verdict, the Centre was to act as an statutory receiver of the disputed land.

"That neutrality (of UP) has been broken by the ASG. The ASG is the Additional Solicitor General of the Government of India. Union of India has to act as an statutory receiver. It does not lie in the mouth of an officer of the Government of India to say that it (matter) is delayed and there is no bonafide," he said, adding, "it is simply impermissible and and a breach of faith of this court".

He said the issue of Faruqui's verdict was raised by the opposite parties in the suits before the high court.

Dhavan also countered the arguments advanced by the Hindu group about "pilgrimage" and said as per their submissions, the Muslims do not have the right under Article 25 (freedom of conscience and free profession, practice and propagation of religion).

He said if arguments by Hindu group was to be accepted, then Christians might be asked to go directly to the Pope for prayers and Sikhs could be asked to go only to the Golden Temple at Amritsar.

At the outset, the Shia Central Waqf Board said the matter should not be referred to a larger bench for any reconsideration of the observations made in Faruqui's verdict.

The Muslim groups have argued before the bench that the "sweeping" observation of the apex court in the verdict needed to be reconsidered by a five-judge bench as "it had and will have a bearing" on Babri Masjid-Ram Temple land dispute case.

Dhavan had earlier termed the Allahabad High Court's verdict of dividing the 2.77 acre disputed Ayodhya land equally among the Sunni Waqf Board, the Nirmohi Akhara and Ram Lalla as "panchayat decision".

Earlier, Hindu groups had opposed the plea of their Muslim counterparts that the 1994 verdict holding that a mosque was not integral to the prayers offered by the followers of Islam be referred to a larger bench.

A three-judge bench of the Allahabad High Court, in a 2:1 majority ruling, had in 2010 ordered that the land be partitioned equally among three parties -- the Sunni Waqf Board, the Nirmohi Akhara and Ram Lalla.