Aussies Do India A Favour 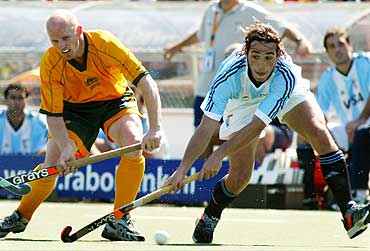 Australia set up yet another India-Pakistan clash when they hammered Argentina 8-3 to join Holland in the final of the 25th Champions Trophy in Amstelveen today.

The victory took Australia's tally to 10 points at the end of the league, while Argentina, who needed to win today to make the final, remained on six, the same as India.

However, India (-2) finished ahead of Argentina (-5) in the league standings on superior goal-difference.

India thus will play Pakistan tomorrow for the bronze medal. Argentina take on Germany for the 5-6 spots.

Argentina, hopelessly outplayed in the second-half, had their moments of success when Jorge Lombi (45th, 68th) and Carlos Retegui (57th) scored.

The score-line would suggest a one-sided encounter, but it was only in the latter stages of the second-half did the Aussies really took control, for until then, Argentina were very much in the game.

The Aussie play underlined their strong team work marked by quick releases, accurate passing and a sure finish, be it in field play or during penalty corners.

Argentina were looking to nurse their goal-difference which would have put them up for a play-off against Pakistan for 3-4 positions. But, on the day, they had just no answer to the Aussies who were unstoppable in the second-half.

Such was the Aussie pace that their forwards frequently outran the rival defenders who left far too much space due to poor marking. Even then, the Argentines fought hard, but ran out of time and steam at the finish.

Australia, who played the last few minutes with nine players following yellow cards to Zain Wright and Paul  Gaudoin, managed to thwart the Argentine forwards, who made a frantic attempt to reduce the margin in a bid to qualify for the bronze medal match.

Later, in an inconsequential match, the Netherlands got past Germany 6-0, without raising much of a sweat and top the table with 13 points. Germany, fielding a development team, suffered their fifth straight defeat.

The Dutch virtually sealed the issue in the first-half when, during a nine-minute spell, they struck thrice through penalty corner specialist Bram Lomans (20th, 29th) and Karel Klaver (25th) before easing off.

Late in the game, ace playmaker Teun de Nooijer got into the act by scoring the fourth in the 62nd minute and another in the 68th. In the final minute, Floris Evers made it 6-0 to complete the German misery

'It is Good For The Game If India Stay At Top'