The Asia Cup 2018 final will be the 35th ODI meeting between the two neighbours, with India dominating the fixture with 28 wins as against Bangladesh's five. 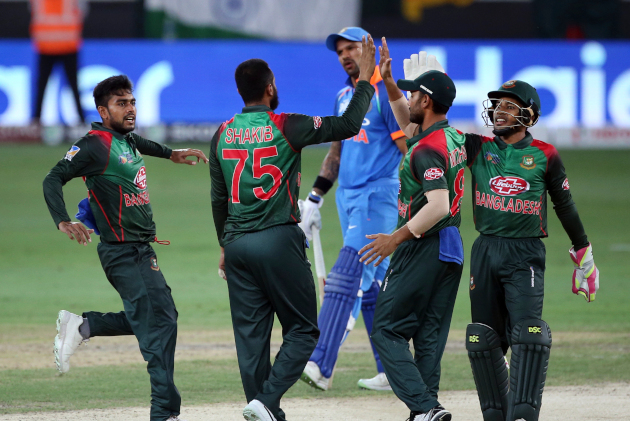 India are the clear favourites going into the 2018 Asia Cup final against Bangladesh at Dubai on Friday. But the Tigers have defeated India in the past, and they have emerged as one of the most dangerous sides in the limited overs cricket in the last few years.

This will be their 35th meeting in ODIs, with India dominating the fixture with 28 wins as against Bangladesh's five. A match was no result; and another abandoned, which is not counted.

Ahead of the Asia Cup 2018 final, we looked back at the five defeats India had suffered against Bangladesh:

Asia Cup Final, India Vs Bangladesh: When And Where To Watch The Match Live

1. India's winning run against Bangladesh came to an end on December 26, 2004, at Dhaka. After 12 wins, 11 of which were thrashings, India lost the second match of the three-match series by 15 runs. It was coming. India just managed to win the series opener by 11 runs at Chittagong.

Chasing a 230-run target, India were all out for 214 with Sridharan Sriram top-scoring with 57. Mohammad Kaif missed out on a fifty, but their 63-run fourth-wicket stand was not enough to save India at Bangabandhu National Stadium.

Mashrafe Mortaza, who scored 31 runs and took the wickets of Virender Sehwag and Mahendra Singh Dhoni was the Man of the match, deservingly so. Captain Habibul Bashar, with brave leadership, was instrumental in giving Bangladesh their first win against India. India, however, won the series 2-1.

2. Then came the shocker in the 2007 ICC World Cup in the West Indies. In a Group B Match on March 17, India were bowled out for 181 with Mortaza once again winning the man of the match award for his 4/38. He accounted for the wickets of Sehwag, Robin Uthappa, Ajit Agarkar and Munaf Patel. Sourav Ganguly scored a painstaking 66 off 129 balls but in vain.

Three fifties from Bangladesh batsmen – Tamim Iqbal (55), Mushfiqur Rahim (56 not out) and Shakib Ah Hasan (53) – helped Bangladesh beat Rahul Dravid's India by five wickets with nine balls to spare. India's campaign was over in the group stage itself, with another loss to Sri Lanka. India did spank Bermuda by 257 runs after posting 413/5 to register their lone win. Yes, that match made famous by Dwayne Leverock's catch to dismiss Uthappa. And that debacle, the early return home was the catalyst that made India made India a dominant form in world cricket. Surely, one of the turning points in India's cricket history.

3. In a thriller, India lost to Bangladesh by five wickets in the last over in a 2012 Asia Cup round-robin match at Dhaka on March 16. Sachin Tendulkar's 147-ball 114 helped India score a big total of 289/5. Virat Kohli (66) and Suresh Raina (51) also contributed with their respective half-centuries.

But it was not enough as Bangladesh chased down with four balls to spare, losing only five wickets in the process. Opener Tamim Iqbal top-scored for Bangladesh with 70 off 99, but it was their middle-order which did the damage. Jahurul Islam (53), Nasir Hossain (54), Shakib (49) and Rahim (46) defied the India attack to register one of their sweetest wins in front of a packed home crowd. India captain Mahendra Sing Dhoni used as many as seven bowlers. Shakib won the man of the match award despite conceding 63 runs without success from 10 overs.

4. India conceded a 300+ total against Bangladesh for the first and only time in ODIs on June 18 2015. Then ran into debutant Mustafizur Rahman to lose the match by 79 runs at Dhaka.

In the first of the three-match ODI, seven Indian bowlers, including Virat Kohli, failed to contain the Bangladeshis. Not a single Bangladeshi batsman did manage to go past the 60-run mark, but there were five who scored more than 30 runs. Iqbal once again top-scored with 60. With Soumya Sarkar (54), he posted a 102-run opening stand. Shakib's 52, Sabbir Rahman's 41 and Nasser Hossain's 34 make sure that Bangladesh go past the magical 300-run mark.

5. Three days' later, the left-arm pacer made it 11 wickets in two matches against India as Bangladesh registered first ever series win over the big neighbours. India were bowled out for 200, with Rahman registering 6/43. Dhawan (53), Dhoni (47) and Raina (34) tried to salvage the situation for India but in vain as Rahman got brilliant support from other Bangladesh bowlers like Nasir Hossain, Rubel Hossain and Shakib. India won the last match of the series by 77 runs.