Are These The Good Or The Bad Taliban?

The Taliban attack on the 14-year-old Malala Tusafzai once again underlines the urgency for the state to establish the writ of the rule of law, otherwise the few Malalas that are left in Pakistan will also be silenced, forever 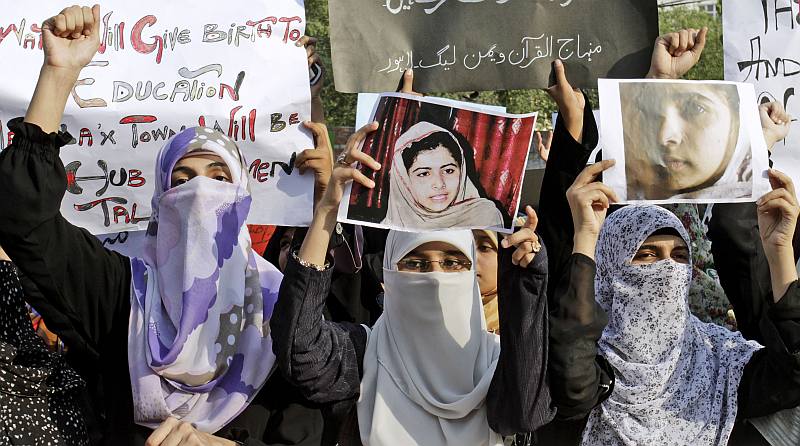 Malala Yusafzai, born in 1998, is only an eighth-grade student from the town of Mingora in Swat district in the Frontier province which is now called Khyber Pakhtunkhwa. At such a young age, she proved to be a threat to the Taliban and conservative forces as she stood for the right of girls to go to school.

On October 9, masked Taliban gunmen stopped her school van while it was dropping children home. The gunmen first specifically asked for Malala and then sprayed her with bullets. She was shot in the head and neck; two other girls were also injured. Malala is now fighting for her life at the Combined Military Hospital in Peshawar after being airlifted there.

A Taliban spokesman, Ehsanullah Ehsan, confirmed by phone that Taliban was responsible for the attack, calling Malala’s crusade for education rights an “obscenity.”  “She has become a symbol of Western culture in the area; she was openly propagating it,” he said, adding that if she survives, the militants would certainly try to kill her again. “Let this be a lesson.” Malala gained popularity for championing the cause of female-education and criticizing the Taliban for opposing it. In 2009, she wrote a weekly blog for the BBC under a pseudonym “Gul Makai” about the atrocities of the Taliban under the leadership of Maulvi Fazlullah who was a simple lift operator before rising to prominence in 2007 through an FM radio station that espoused Islamist ideology.

Malala, while writing the weekly diary for the BBC, lived in Mingora, Swat, when it was occupied by the Taliban before they were ousted in a military operation in 2009. During the Taliban occupation, education was banned and many townspeople were executed. Schools were destroyed, and girls' schools were targeted specifically, making them shut down.

For her courageous and outstanding services for the promotion of peace under extremely hostile conditions, she was awarded the first National Peace Award by the Pakistani government in December 2011.

The whole Pakistani nation is shocked, angry and praying for her. Most are expressing their indignation at the government for not providing her adequate security. The authorities say that they had offered her security but her family turned down the offer. Although the family refutes this claim, it should not be surprising considering that security, particularly by the police, is most of the time a liability rather than affording any protection.

It is not fair to blame the government if a prominent person is shot. This can happen anywhere in the world. However, what is shocking about Pakistan is the sheer number of  lawless elements possessing arms, ranging from a simple pistol to sometimes an anti aircraft gun, and freely using them. Pakistan is perhaps now the only country in the world where almost every adult male could be seen carrying a submachine gun upon crossing the provincial border into any one of the seven tribal agencies; drugs are also openly sold there.

The tribal areas are a smugglers’ paradise as the Pakistani police has no right to enter. It is thus a common occurrence that cars are stolen and people are kidnapped and moved from Pakistan to the tribal areas and the police remain helpless. The military never entered these areas until recently when it was forced by the NATO Alliance in Afghanistan to crack down on the Taliban based in these areas. The military operation, however, was limited in scope and the army’s writ is really confined to the main roads and it usually remains within its camps and moves only in convoys and usually after imposing a curfew near the roads.

It is a sad but a serious situation for Pakistan. The country is suffering due to the various fundamentalist forces carrying out terrorist activities throughout the country and the question of any kind of economic activity, what to talk of foreign investment, in such an environment is out of the question. As shown by the shooting of Malala in Swat, it is becoming very difficult to speak against the fundamentalists who do not believe in democracy and freedom of expression. They believe in complete elimination of all opposition which apart from expressing their indignation is meant to teach the whole community a lesson. And they have succeeded to a large extent, which will prove to be disastrous for the country in the long run.

It is now almost impossible for a female to move around in certain areas of Pakistan without covering her head. The interaction between males and females is becoming difficult and the whole atmosphere smacks of suppression.

Many blame themselves and the civil society for the current situation but it is unfair to do so as one side is heavily armed and believes in total violence and utter destruction. It is natural for everybody to look towards the armed forces for salvation to get them out of this repression.

This is what bothers the West and explains the constant American drone attacks on North Waziristan. The military is failing to realize that even the `good’ Taliban have a creeping influence on the society including even the armed forces as is shown by the involvement of the armed forces’ own personnel in almost every attack on its bases and installations. Additionally, it does not take long for the `good’ ones to turn on their benefactors following a disagreement as has happened in the case of many groups. After all, many of the present `bad’ ones were once considered the `good’ ones by the military authorities.

Pakistan is facing an extremely serious crisis but it is not without a solution. What the solution needs is a clear visionary and courageous thinking which compels every person within its border to disarm unless the arms are licensed; and obliges everybody without exception to operate within the perimeters of law and democratic norms. It is the only solution otherwise the few Malalas that are left in Pakistan will also be silenced, forever