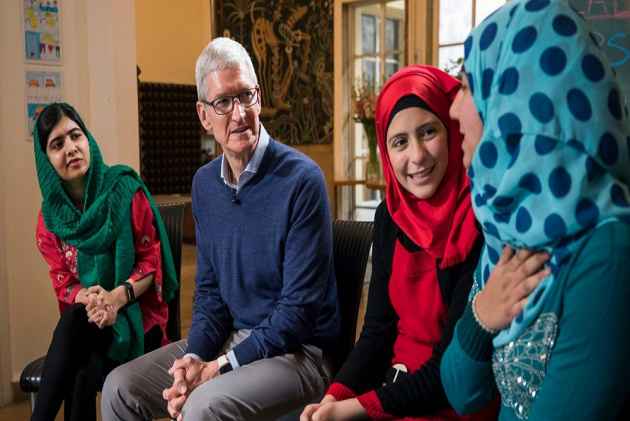 Seeking to strengthen girl education in India and other countries, technology giant Apple has teamed up with the Malala Fund, led by Nobel Peace Prize Laureate Malala Yousafzai, to double the number of grants awarded to the children.

With Apple's support, Malala Fund expects to double the number of grants awarded by its Gulmakai Network and extend funding programmes to India and Latin America with the initial goal of extending secondary education opportunities to more than 100,000 girls, Apple said in a statement.

Apple will become the fund's first Laureate partner, enabling a significant expansion of Yousafzai's effort to support girls' education and advocate for equal opportunity, it said.

"My dream is for every girl to choose her own future," said 20-year-old Pakistani, the youngest Nobel Peace Prize winner.

"Through both their innovations and philanthropy, Apple has helped educate and empower people around the world. I am grateful that Apple knows the value of investing in girls and is joining Malala Fund in the fight to ensure all girls can learn and lead without fear," she said.

Since 2013, Malala Fund has been working in partnership with other organisations, the private sector and governments around the world to realise every girl's right to 12 years of free, safe, quality education.

Gulmakai Network is named after the pseudonym 11-year-old Malala used when writing a blog for the BBC about life under the Taliban. She was awarded Nobel Peace Prize in 2014.

"We believe that education is a great equalising force, and we share Malala Fund's commitment to give every girl an opportunity to go to school," said Apple CEO Tim Cook.

"Malala is a courageous advocate for equality. She's one of the most inspiring figures of our time, and we are honoured to help her extend the important work she is doing to empower girls around the world," Cook said.