Neonicotinoids appear to have devastating effects across the natural world: we need a global moratorium. 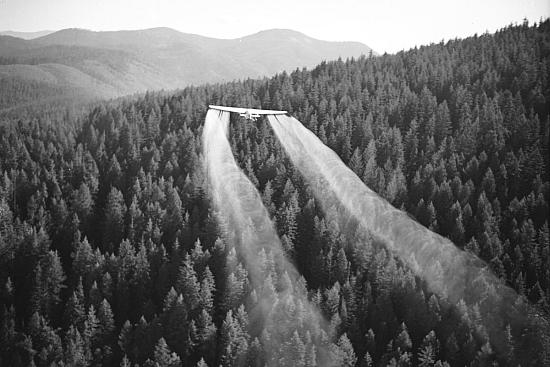 Here’s our choice. We wait and see whether a class of powerful pesticides, made by Bayer and Syngenta, is indeed pushing entire ecosystems to oblivion, or we suspend their use while proper trials are conducted. The natural world versus two chemical companies: how hard can this be?

Papers published over the past few weeks suggest that neonicotinoids, pesticides implicated in killing or disabling bees, have similar effects on much of life on earth. On land and in water, these neurotoxins appear to be degrading entire foodchains. Licensed before sufficient tests were conducted, they are now the world’s most widely used pesticides. We are just beginning to understand what we’ve walked into.

A paper in Nature last week showed a strong correlation between neonicotinoid concentrations and the decline of birds such as swallows, skylarks, yellowhammers, wagtails, starlings and whitethroats(1). It couldn’t demonstrate causation, but it was elegantly designed to exclude competing factors. The precipitous loss of insects caused by this pesticide is the simplest and most obvious explanation, as all these birds depend on insects to feed their young. Where the chemical was heavily used, bird populations fell by 3.5% a year; where it was not, they held up. At this rate, it doesn’t take long to engineer a world without song.

Another paper reports that residues of neonicotinoids were found in all the soil samples the researchers took(2): these chemicals are highly persistant. Sold to farmers as precise and targeted, they are some of the least discriminate pesticides ever produced. When they are used to treat seeds, just 5% is absorbed by the plant: the rest soaks into the soil, with potentially lethal impacts on the animals that maintain its structure and fertility(3).

They are also water-soluble. Recent papers suggest a collapse in the diversity and abundance of invertebrates in water running off farms where neonicotinoids are used(4,5.6). Mayflies and caddisflies, essential to the survival of many aquatic ecosystems, are especially vulnerable(7).

Another new paper provides compelling evidence linking these chemicals to colony collapse disorder: the sudden disappearance of honeybees that’s now trashing the livelihoods of beekeepers in the US(8). Half the colonies exposed to neonicotinoids disappeared in the course of one winter; none of the untreated swarms vanished.

Worldwide contamination, indiscriminately wiping out wild animals, including those on which farming depends: these are the findings of an analysis of 800 scientific papers, also just published(9). How much more obvious does the case for action need to be?

Sure, there is plenty that we don’t yet know. We know almost nothing about the long-term, cumulative effects of these chemicals, or about what neonicotinoids do to birds that eat contaminated seeds, to mammal and amphibian populations, to coral reefs or marine life of any kind(10). Governments went into it blind, approving neonicotinoids before they had even a fraction of the necessary knowledge.

Far from being essential to food production, these pesticides are a serious threat to food supplies, through their likely impacts on bees and soil animals. They are well-designed for lazy farming, but their advantages vanish in the face of more sophisticated methods such as integrated pest management(11). The only sensible response to the little we know so far is a global moratorium, pending further research, for all purposes except the control of human diseases.

In August 1962, after extracts from Rachel Carson’s forthcoming book Silent Spring were published, President Kennedy launched a commission to investigate the impacts of the pesticide DDT. Within 10 years it was banned from use in the United States, except for public health emergencies(12).

This was despite lawsuits and a massive lobbying and disinformation campaign by the chemicals industry. Alongside the usual accusations of hysteria and other alleged female pathologies, it suggested that Carson was seeking to destroy American farming on behalf of the Soviet Union(13). The smears continue to this day. Corporate front groups concocted a myth that DDT was banned worldwide as a result Carson’s book, causing the deaths of millions through malaria(14,15). In fact the ban (through the Stockholm Convention) is for agricultural purposes but not disease control(16). DDT would soon have become useless against malaria had it continued to be used by farmers: the wider their exposure, the more quickly mosquitoes become resistant. Kennedy and his successors held firm.

Compare this with the British government’s response to attempts to control neonicotinoids. It threw everything it had against an EU proposal to suspend their use on flowering crops. Owen Paterson, the worst environment secretary this country has ever suffered, who was struck down by the Curse of Monbiot on Monday night(17), wrote privately to Syngenta to reassure it that “our efforts [to stop the suspension] will continue and intensify in the coming days”(18). His department commissioned a study claiming to show that bees were not being harmed(19). It was so flawed that no journal would take it. The lead author soon left to work for Syngenta(20).

The government’s chief scientist, Sir Mark Walport, made wildly misleading statements about the science and used scare tactics and emotional blackmail to try to keep the pesticides in circulation(21). Fortunately the government’s campaign failed, and a two-year moratorium, though limited only to certain flowering crops, came into force across the EU in December 2013(22).

The case for a global moratorium is just as strong, so once more the government weighs in on the wrong side. Ian Boyd, chief scientist at the environment department, sought last week to dismiss the new Nature paper(23). His article was so slapdash that he couldn’t even get the lead author’s name right(24). He insisted that there was insufficient evidence to draw conclusions. So did he announce a massive research programme to resolve the uncertainties? Did he hell. Uncertainty suits these people, and they will exploit it as ruthlessly as they can.

Will the new secretary of state, Liz Truss, champion science, not chemical companies? I would love to believe that there might be a remaining glimmer of recognition that governments exist to protect us from exploitation and destruction. Kennedy knew it, for all his faults. Like him, our politicians have a clear choice: surrender to corporate bullies or defend the living world. What will they do?

6. This paper, which documents the rising volumes of neonicotinoids entering freshwater ecosystems, is also worth reading: http://www.plosone.org/article/info%3Adoi%2F10.1371%2Fjournal.pone.0092821

24. He has since corrected the title, which last week read “More is sometimes less: a response to the Hollman et al paper”, but his mistake has been preserved in the URL: https://ianlboyd.wordpress.com/2014/07/10/more-is-sometimes-less-a-response-to-the-hollman-et-al-paper/