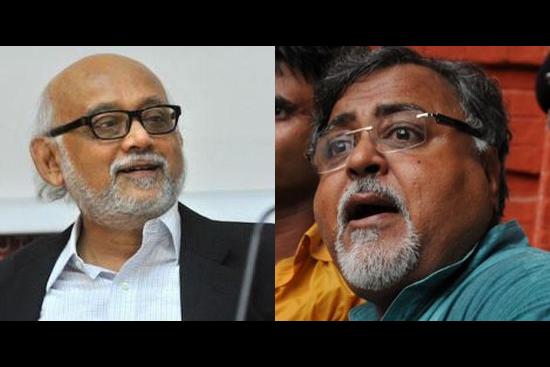 A few hours ago, I was accosted by a reporter.

Q: “Mr Chatterjee, I want to ask you about your statement on the Jadavpur University incident.”

A: “I am sorry, but I haven’t made any statement on the Jadavpur University incident.”

Q: “I mean your statement in which you say that if the students didn’t like the Jadavpur Vice-Chancellor, they were free to go to any other university.”

Q: “As the Education Minister of West Bengal, are you saying that is now the official policy?”

A: “I am sorry, but I am not the Education Minister…”

Q: “You said that the government was not going to change the Vice-Chancellor just because the students don’t like him and that if they disliked him so much they could go and study somewhere else.”

A: “Well, that means that when a university invites applications from students, it is offering a package for sale that includes the Vice-Chancellor. That’s a very interesting marketing strategy. I haven’t seen that before.”

Q: “So as the Education Minister, are you saying that you are initiating a new marketing strategy for the university?”

A: “I am not the Education Minister…”

Q: “I believe that before you entered politics, you had a private sector job in marketing. And only a few months ago, you got a PhD in Economics…”

A: “Yes, from a university where he is the boss of the Vice-Chancellor and where the examiners addressed him as ‘Sir’ during the entire viva examination.”

Q: “So under this new marketing strategy, are you suggesting that the government will ensure that there is no Leftist or Maoist propaganda on campus?”

A: “Well, that seems to be one of the complaints on the part of the government.”

Q: “Your party leaders are also saying that the Jadavpur campus had become a den of drink and drugs and sex. The Vice-Chancellor says that many students came to campus only for that reason and even brought outsiders with them and that he had tried to stop all that which is why the students turned against him. As the Education Minister, do you support that allegation?”

A: “Actually, I am not the Education Minister…”

Q: “I see you want to avoid answering the question. But why was a commando unit sent to Jadavpur that night along with the police force?”

A: “Yes, I’ve heard that a special force of commandos trained to fight terrorists was sent to rescue the Vice-Chancellor. It seems absurd to believe that the police did that on their own. The Kolkata police have a lot of experience in dealing with student agitations, even violent ones. But no one has ever heard of a commando unit sent to do duty on a university campus. That’s a first. It could only have happened if it had clearance from the highest political authority.”

Q: “Are you saying that as the Education Minister you had no knowledge of this move?”

A: “I am not the Education Minister.”

Q: “Let me ask you about another statement you have made, that if the agitating students don’t immediately stop their movement and return to class, the government will let loose the Trinamul students and you would not be responsible for the consequences.”

A: “Well, right at this moment there is a march by the Trinamul student organization demanding order on campuses and condemning the agitation in Jadavpur.”

Q: “Why have you made a matter concerning a Vice-Chancellor and students something that involves the prestige of the entire government?”

A: “It seems like an utterly stupid thing to do.”

Q: “So as the Education Minister, are you dissociating yourself from the Trinamul students’ counter-demonstration?”

Q: “Finally, Mr Chatterjee, why are you always accompanied these days by the leader of the Trinamul students’ organization?”

Q: “That is a statement of extreme modesty, Mr Chatterjee – that as Education Minister, you are prepared to be led by the student leader.”

A: “I am sorry, but I am not the Education Minister.”

Q: “That is also a statement of extreme self-denial, so rare in politics these days. You almost seem like an impostor posing as the Education Minister, Mr Chatterjee.”

A: “Well, I’ve thought about impostors for a very long time. The more I think about them, the less I am able to tell between impostors and genuine persons.”

Q: “Thank you very much, Mr Chatterjee. We will certainly follow with great interest your next steps as Education Minister.”

A: “But that one is a fact. I know it for sure. I am not the Education Minister.”

(a) Partha Chatterjee, the author of this piece,  is a political theorist and a historian. He is a Professor at Columbia University, New York, and has been a Director of the Centre for the Study of Studies in Social Sciences, Kolkata, with which he remains closely associated. He is the author of several books, including The Princely Impostor. Partha Chatterjee has assured us that he is not, and has never been the Education Minister of the State of West Bengal in India.

(b) The other Partha Chatterjee, pictured on the right above, is the Education Minister of the State of West Bengal in India. He is a leading politician of the All India Trinamool Congress Party. In the past few days, Mr. Chatterjee has expressed the view, that if the students of Jadavpur University do not like their VC, they are free to leave the university. The All India Trinamool Congress called for a demonstration in Kolkata to counter the demonstration in support of the students of Jadavpur University that took place on the 20th of September. In today’s demonstration, the All India Trinamool Congress’ main slogan was – ‘Does the Stink of Rebellion Come Because of the Crackdown on Charas, Ganja and Alcohol – thereby implying that the protesting students of Jadavpur and their allies were somehow acting at the behests of a drugs and illicit liquor mafia.

This piece first appeared in Kafila

'Indian Muslims Will Live For India. They Will Die For India'