In not even putting a semblance of a fight after Pakistan set India the task of batting five and a half sessions to earn a draw, the Indian batsmen showed, to put it mildly, a distinct lack of application. 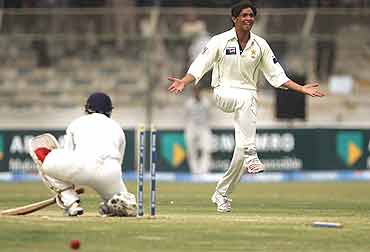 The abject failure of the Indian top-order batsmen, barring Yuvraj Singh and, to some extent, Sourav Ganguly, in the final innings of the Test series against Pakistan contrasted sharply with the success that the home batsmen found in their second innings when the top seven batsmen made half-centuries and more.

There is an impression, not entirely incorrect, that while bowlers get the rough end of the critics' stick for their failures, batsmen get away rather lightly. But when one casts one's mind back to Bangalore last year when India lost the final Test to Pakistan by 168 runs, one can distinctly recall the batsmen being brought before the firing line.

It is a pity that Yuvraj's two Test centuries in Pakistan have come in matches that India has lost. He will, however, remember waging a lone battle as the wickets feel in heap, the other batsmen finding it tough to come up with answers posed by the Pakistan bowlers. His show of character was praiseworthy and the only other batsman who went remotely close to emulating that for some time was Ganguly.

In not even putting a semblance of a fight on Wednesday after Pakistan set India the task of batting five and a half sessions to earn a draw, the Indian batsmen showed a distinct lack of application. The surrender started in the first over when a tentative Rahul Dravid edged a catch off Shoaib Akhtar to the wicket-keeper.

There will be some suggestions that Dravid should have dropped himself down the order to a more familiar No. 3 position, especially after he had an uncomfortable time in the first innings against the new ball. But, having scored a century in each of the first two Tests in Lahore and Faisalabad, he may not even have considered the option seriously.

Mohammed Asif exploited Virender Sehwag, VVS Laxman and Sachin Tendulkar's hesitant footwork by getting the ball to snake through their defences. That left Ganguly and Yuvraj to delay the inevitable with a century stand but Pakistan had all but wrapped up the win when Tendulkar was bowled.

Possibly playing his last Test innings in Pakistan, the little big man of Indian cricket conveyed a determination to leave his stamp of class. A pull as well punches through covers and point off Shoaib showed his eagerness to steer India to safety. But he played inside the line of an Asif delivery and was bowled. He was down on all fours after a ball that kept low slipped passed the outside edge of his bat and hit the off-stump.

In 16 Tests against Pakistan, Tendulkar has scored 918 runs at an average of 39.91, well below his career average of 56.14, but there still are some good memories from the time he made his Test debut as a 16-year-old in Karachi in 1989.

His maiden half-century in Faisalabad, the 136 in Chennai in 1999 when he nearly won the Test match almost single-handedly despite suffering a nagging back pain and his disappointment after making an unbeaten 194 in Multan in 2004 are all memories that his fans will cherish for time to come.

There was nothing memorable about the 94 that he picked up in Mohali last year but he compensated with two wonderful half-centuries in the next Test in Kolkata before adopting an ultra-defensive approach in Bangalore. On this trip, he made just 63 runs in three innings but each of his dismissals can be viewed with interest. He gloved a catch down the leg-side off Shoaib in Faisalabad that was later shown to be not out as the glove was not in touch with the bat and, cramped for space, was bowled off bat and pad by Abdul Razzaq in the first innings here.

Come to think of it, when India comes back to play Test cricket here in 2010, quite a few other players may not also be around in the squad. Anil Kumble would be around 40 years of age, Ganguly 38, Dravid at 37, like Tendulkar and Laxman, just a year younger. It would take them all some doing to come back and play another Test in Pakistan.