According to reports, about 370,000 Rohingya Muslims have fled Myanmar's northern Rakhine state for Bangladesh, Nepal and India since the outbreak of violence last month. 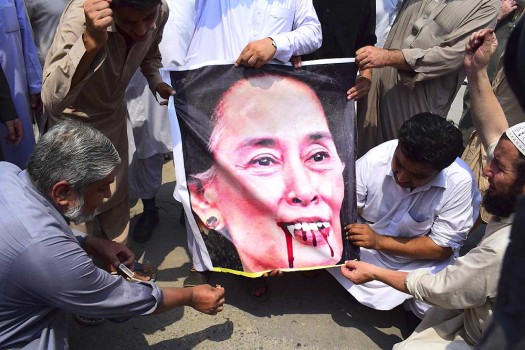 According to reports, about 370,000 Rohingya Muslims have fled Myanmar's northern Rakhine state for Bangladesh, Nepal and India since the outbreak of violence last month.

Entire villages have been burnt down, leading critics and the United Nations into accusing the NLD Government of ethnic cleansing.

Myanmar's military, however, says it is fighting Rohingya militants and has denied reports that it is targeting civilians.

The Rohingya, a mostly Muslim minority in Buddhist-majority Rakhine, have long experienced persecution in Myanmar, which says they are illegal immigrants. They have lived in Myanmar for generations but are denied citizenship.

The UN Security Council is due to meet on Wednesday to discuss the crisis.

Nobel Peace Prize winner Suu Kyi has been criticised by former supporters in the West for failing to do enough to prevent the violence.

She had lived under house arrest for 15 years for her pro-democracy activism, is widely seen as the head of government in Myanmar.

Fellow Nobel laureates, including the Dalai Lama, Archbishop Desmond Tutu and Malala Yousafzai, have called on Ms Suu Kyi to stop the violence.

Suu Kyi was expected to participate in discussions at the General Assembly session in New York, which runs from September 19 to 25. (ANI)