'All Three To Blame'

"The match referee for such a patently unfair judgement, and the ICC and BCCI for unnecessarily starting the media war," says PCB chief Lt Gen Tauqir Zia. 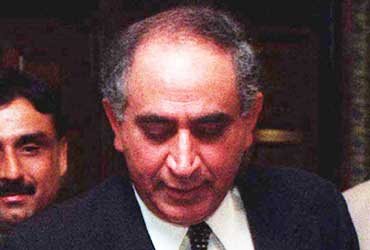 Do you believe this serious dispute between the BCCI and the ICC would precipitate a split in the ICC on racial lines?

No, I don't think so. It is already very unfortunate that it has come to such a sorry pass. This is bad for cricket. To me, the unique thing about this controversy is that previously whenever there was a crisis, it was either the players (Bodyline series, ball-tampering, match-fixing) or outside forces (Kerry Packer, bookmakers) who acted as catalysts. This time the situation has been exacerbated by the establishment (ICC, BCCI, UCBSA).

Without going into who is right and who is wrong, the bad thing about this whole issue is that instead of devoting themselves to damage control, the ICC tried to score points. The ICC cannot act in a precipitate manner, disregarding the facts of the case and still think that its image as a global body would not be tarnished.

Talking about a split is rather premature at this point. Ultimately, I believe, the issues would be resolved in a fair and amicable manner.

But if it does come to that pass, would the PCB side with the BCCI?

We will cross that bridge when we come to it. Having said that, let me tell you that the boards of the two countries have been in close contact with each other for the past two decades, they have organised two World Cups together and backed each other up on most issues of substance at the ICC. However, we feel that if cricket is to prosper as a game then we must discuss such issues at the ICC and resolve them amicably.

Do you have any idea which other countries are going to side with India? Would the sub-continent have a majority in the executive board?

I would not even think about it. It is not about scoring points or gathering votes. Cricket as a game should be promoted with more vigour and not diminish because of this crisis.

I don't know whether you would want to take a position on it, but whose fault was it? How did the whole thing got so terribly out of hand?

Well, I would say all three of them. The match referee for such a patently unfair judgement, and the ICC and BCCI for unnecessarily starting the media war.

How could the ICC or the BCCI have handled it differently to defuse the situation?

In the world media this has been billed as a mighty clash of egos, of a case of Malcolm Gray and Jagmohan Dalmiya fighting to sort out each other. What do you think?

I know both of them fairly well. Both are different personalities. Gray would never want injustice for anyone. Hence, he is not to be blamed. Perhaps, it was all because the ICC had to show that it had to try and maintain an upper hand, or it might not be taken seriously as a body.

Jaggu on the other hand is strong willed and a smart cookie. Like many he has this nagging feeling that cricketers from Asia were being wronged. For how long should they continue to suffer in silence, is the question he must have asked himself. As president of BCCI, Jaggu decided to stand up and be counted. I wouldn't blame him for that - that's is his job.

What if I take up the case of Shoaib Akhtar, and remind the ICC that it has failed to take a decision on whether it should accept the most respected authorities in the world, which incidentally hail from Australia and not the sub-continent? The ruling of the learned Aussie medical team is unequivocal, and the ICC's review system is flawed.

Should not there be a right of appeal against the match referee's decision? Isn't this basic right to information being denied to the players and the public?

It's only fair that a referee gives the reasons behind his arriving at a certain verdict. I would go one step ahead, the ICC should point out to him the inconsistency, if there has been any, in his judgements over the years.

A mechanism also needs to be evolved regarding appeals in decisions which are perceived to be unfair. I also hope that this elite panels have representation from almost all the Test playing nations.

Competence is important, but so is faith. Integrity and not competence is in question. Unless this perception in cricketers from certain nations that they were being targetted is redressed, the problems would remain. And perception, whether someone likes it or not, is reality.

Should important ICC decisions be taken by the president alone or through proper consultations? As Geoff Boycott said on TV, the decision to term the third Test unofficial is wrongly being called the ICC's decision, it is actually one man's decision, Malcolm Gray's. Should the ICC's technical committee been consulted?

The moment the one-sided judgements were handed out, and India responded to it in no uncertain terms, it was clear that a crisis of grave proportions was at hand. It no longer was a routine decision. When the South Africans decided to go along with India, it already looked barely salvageable. So, the wise thing would have been to bring as many people as possible on board, to develop consensus and defuse the situation. The correct option was right there, crying to be made: refer it to the technical committee. But the ICC didn't resort to that, and the situation kept worsening.

Should  these decisions involving cricketing rules be decided by a simple majority in the ICC? If in the ICC executive board meeting on March 16, Jagmohan Dalmiya forces a vote on the third Test and gets a majority to vote to turn the match into an official one, do you think is it the correct way to do it?

The ICC is the sum total, the whole of all the boards. So what they believe is in their collective interest must prevail. As for your question, regarding a specific event or matter, I believe the executive board has the mandate to decide whichever way it wants. What other way could there be?

What is the executive board's purpose if it is not to decide on issues of critical importance? Should cricket be governed by an elite bureaucracy which calls itself the ICC, drawing its mandate from the executive board but acting independently and more seriously in what is deemed to be taking decisions against certain boards and its cricketers and pussyfooting with others? What remedy is available to a board which feels wronged if it couldn't even take its case to the executive board? Do you think such an unprecedented happening as withdrawal of official status of a Test is so minor a issue not to be raised?

Do you see light at the end of the tunnel? Can this crisis make cricket a fairer and better game?

It should. Everybody stands to learn from the mistakes which have been made recently, and also over the past few years. I think that the ICC and the boards have learned from this crisis that injustice and confrontation are bad for the game. That everybody stands to lose if the image of the game suffers.

Also that the ICC has to evolve itself into an equitable world body to enjoy the respect and authority that it cherishes by commanding and not demanding it.

In my view, the only way ICC can command respect and authority is if it has officials from all Test-playing nations. So far, it has been the preserve of the very few who have excluded others from appointments and nominations to key positions.

On too many an occasion the officials at the ICC headquarters have displayed a bias against certain nations, and this is not good for the game. It is about time the ICC realised as to why the Asians accuse it of racial bias and victimisation. Such feelings may no longer be passed off as misguided perceptions.