The noisiest moment of the day is when a huge, near-obsolete, ex-Soviet four-engined jet screams in to land with a decibel count that causes the inner ear to self-plug in disbelief.

If you live anywhere between Okhla and Palam, the noisiest moment of the day is when a huge, near-obsolete, ex-Soviet four-engined jet screams in to land with a decibel count that causes the inner ear to self-plug in disbelief. Apparently this is a cargo service that lifts (especially in winter) woollen clothes such as angora sweaters sold in Paharganj, to re-sell for a tidy profit in Uzbekistan et al. While visiting budget traveller friends in Paharganj 10 years ago, I bought one of these sweaters which came down to my knees and rose to a rolled collar almost two feet long, a fabulous bargain for 300 rupees, though definitely not rabbit-friendly. At the shop was a bulk buyer, a blousy madam from a Central Asian republic, who apparently invested her profits orally—all her teeth were encased in gold. While some of these Mae West characters were reputed to have business interests (of an afternoon, with one’s feet up) in Karol Bagh, this particular sweater-packing momma personally oversaw the packing of her order, and when the consignment was stitched up, she loaded it into the back of a Tempo—and then sat on it the whole way to Palam (where she would flash her golden smile at the Customs). So the next time you curse the subsonic shriek of this four-engined dinosaur for putting all polite conversation on hold, think of all the warm smiles it has brought to the faces of the shivering citizens of Central Asia, not to mention Eskimo Nell’s gritted teeth astride the open Tempo. 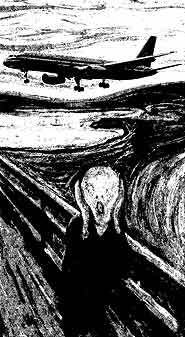 The Yamuna Barrage is a landmark for circling aircraft to complete their circuit and turn back on the glide path to the runway. If the wind’s in the right direction, the pilot will fly over or near Jamia Millia, Crown Plaza Surya, Friends Colony, the Ring Road Flyover between Srinivaspuri and Lajpat Nagar, All India Institute of Medical Sciences, Delhi City Limits, the Hyatt and Vasant Vihar. It is fascinating to assess from the amount of sound heard in a garden situated under the glide, the provenance of the passing overhead traffic.

One encouraging sign is the improvement of muffling devices on aircraft engines and over the years you learn to distinguish the latest mark of an aircraft type by the lower key of its thrust. You can, in fact, rate the latest technology by the whisper of the engines and no longer is it true that the bigger the aircraft the louder will be its presence.

One area that doesn’t improve and could do with the muffler removed is the Delhi airport public announcement system. For years, Domestic Arrival acoustics have been appaling, which suggests nobody bothers to check them out, let alone upgrade. The visitor wants his flight information loud and clear instead of smothered by affected shuddh Hindi or simpering starlet English.

From Monument To Metropolis