The Indians had themselves to blame as they blew away a 41-run first innings lead with a pathetic batting display in the second, which allowed South Africa to record a memorable come-from-behind 2-1 series triumph. 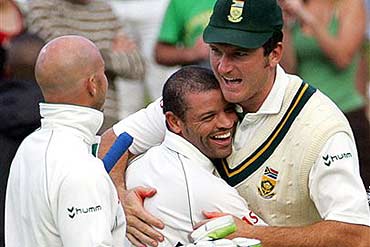 India's quest for a historic Test series win in South Africa ended in agony after the home team fought their way to a five-wicket series-clinching victory today with some sensible batting.

Chasing 211 for victory, the South Africans held their nerves as they negotiated a deteriorating fifth day track to overhaul the target and record a memorable come-from-behind 2-1 series triumph in overcast conditions.

Skipper Graeme Smith laid the foundation for the run chase with 55 while all-rounder Shaun Pollock, promoted to the number four slot, chipped in with a useful 37 to take the game away from the visitors, who lacked the firepower in bowling.

The Indians had themselves to blame for the debacle as they blew away a 41-run first innings lead with a pathetic batting display in the second, which allowed the hosts to come roaring back into the game.

Ashwell Prince (38 not out) hit the winning stroke off Sachin Tendulkar to trigger off scenes of jubiliation in the South African dressing room, which at one time looked tense with the weather threatening to play spoilsport.

Veteran Anil Kumble, on whom India's hopes rested, lacked the sting and never really looked menacing against the South Africans, who countered him without any trouble.

In the circumstances, Zaheer Khan (4-62) tried his best and took two quick wickets on an absorbing final day's play to raise visions of an Indian victory but that hardly proved enough in the end.

The hosts, resuming at 55 for 2, coasted home well past the scheduled close of play but that was only because rain and inefficient ground staff had held up their progress for most of the day.

It was the fifth-wicket pair of Jacques Kallis (32) and Prince who guided the team out of a tricky spot by sharing a 77-run stand and were only separated when the all-rounder skied a catch with only two runs remaining for win.

Smith's masterstroke in promoting Pollock to number four at the start of the day paid off well as the Indians were rattled to see 56 runs being scored in a mere 10.4 overs.

It was at this stage that heavens opened and persistent rain held up play.

Even as it rained, the ground staff tried to take the pool off the sheets only to realise that the supersopper would not work because of drained battery. The comedy of errors was complete when it emerged that nobody knew how to take the water off the bucket of the machine.

So even as rain stopped in the afternoon, taking water off the sheets was a struggle and a good one hour was wasted before the umpires could commence the game at five past three.

With gathering gloom, the remaining 80 overs on the board were not likely to please Smith who began in aggressive fashion in order to finish off the game.

But Zaheer held back that charge by accounting for Smith and Pollock in an incisive eight-over spell but the back-up bowling of the visitors was an issue on the day.

Smith was brilliantly caught off an inside edge by Dinesh Kaarthick while Pollock guided a catch to VVS Laxman at slip.

Munaf Patel made a cosmetic entry at the bowling crease and bowled the final over before tea break but it was apparent that the bowler was not fit and his sore ankle had flared up again.

Tendulkar also did not bowl much as the word was out that he had batted in muscular pain in the back on the fourth day and had needed an injection.

Chasing 211 for victory, South Africa were 55 for 2 in their second knock at close on fourth day.

India had themselves to blame, managing only 169 in the second innings after being 90 for 2 at one stage.

The chief offenders for India, ironically, were two of their greatest batsmen, Tendulkar and Rahul Dravid, who batted listlessly in the afternoon and allowed the South Africans to come back storming in the match.

Tendulkar made 14 from 88 minutes of uninspiring batting in which he faced 66 balls and hit just one four. Dravid, in this stretch, made 11 from 88 minutes and in between them, India's golden chance to win the match went abegging.

It wasted the good stand of 84 for the third wicket between Dravid and Sourav Ganguly (46) who came to the wicket in weird circumstances in the morning.

After openers Virender Sehwag (4) and Wasim Jaffer (2) departed for only six runs on the board, an umpiring mistake caused enough confusion in Indian dressing room to delay the arrival of the next batsman.

Tendulkar was due to arrive at number four before he was informed by the third umpire that he couldn't come out to bat before 10:48 am, making up for the time he had spent off the field in South Africa's first innings.

Since Laxman was in the change room, Ganguly was made to come to the middle and must have been mildly grateful that home captain Smith had acceded to umpires' request and not pressed for "timing-out" the batsman.

According to rules, a batsman must replace the dismissed batsman within three minutes of the previous dismissal.

Ganguly batted belligerently for his 46 runs before he steered Kallis to Herschelle Gibbs at point region. In all he batted for 131 minutes and hit five fours from 89 balls.

Dravid was the first one to leave in the afternoon session during which India perhaps lost their footing in the match, scoring only 48 runs at the cost of four wickets in the middle session.

Laxman (1) was dismissed by way of run-out when he hesitated for the second run and just about failed to make his crease.

Tendulkar (14) completed the Indian misery when he was given out leg before wicket off Pollock though the leg before decision by Pakistan umpire Asad Rauf was dubious at best.

India rallied from a position of 121 for 6 mainly through Kaarthick's cameo knock of 38 off 48 balls with six fours before he finally ran out of partners.

Dale Steyn ran through the tail, first bouncing Kumble (6) and then cleaning up S Sreesanth (1) and Patel (0) off successive balls in his seventh over though the last named was dismissed off the seventh ball of the over, one another instance of poor umpiring by Rauf.

India struck two blows in South Africa's second innings, first AB de Villiers (22) edging Zaheer behind the stumps and then Hashim Amla falling leg before off the last ball of the day's play to Kumble.

India secured a 41-run lead after bowling out South Africa in the dying minutes of the day's play for 373 with Kumble claiming 4 for 117 from 42-odd overs.

The hosts never quite broke free from the shackles of Indian bowlers but they did manage to come closer to the Indian total, courtesy the 83-run fourth wicket stand between Kallis (54) and Prince (26) and later on a 69-run association between Mark Boucher (50) and Pollock (31) for the seventh wicket.

As expected, Kumble bore the brunt of bowling but the master leg-spinner did not bowl as well as he could have on a spin-favouring surface.

Captain Smith led the South African challenge from the front with an unbeaten 76 as the hosts made a strong recovery to be placed at 144 for one at close in reply to India's 414 in the first innings.

Smith also put on 130 runs for the unbroken second wicket stand with Amla (50) to seize back the initiative from the visitors.

The South Africans lost an early wicket when de Villiers (1) inside edged Sreesanth behind the stumps but thereafter the Proteas came back strong at the Indians to throw open the match.

India did appear rattled by the aggression of the hosts and there were a number of mis-fields which compounded the rather poor line bowled by the bowlers.

It more or less completed a poor day for the Indians who resumed at 253 for 3 and added only 161 runs while losing the rest of the batsmen.

Despite half centuries from Tendulkar (60) and Ganguly (64), and a belligerent 40 from demoted Sehwag, India suffered a collapse and lost their final five wickets for 19 runs.

India were well on course for a big first innings score when they took lunch at 350 for 5 and thereafter swelled it to 395 for 5 within 45 minutes on resumption.

Jaffer led India's batting renaissance with a century as the visitors seized the early initiative.

Jaffer, barely lucky to make the eleven, slammed 116 to power the Indians to 254 for 3 at close on the first day, the highlight of which was the 153-run opening stand the Mumbai batsman shared with a new partner in Kaarthick.

Kaarthick, playing a Test after a gap of 16 months, made a gritty 63 from 240 minutes and 170 balls inclusive of seven fours and did not allow the hosts a wicket till the first two sessions.

Dravid (29) did his side a huge favour by winning the toss and asking Kaarthick to step in the opener's slot, necessitated by Sehwag's poor form.