We live in sad times indeed if we can no longer recognise whom and what the satirist intends to target. 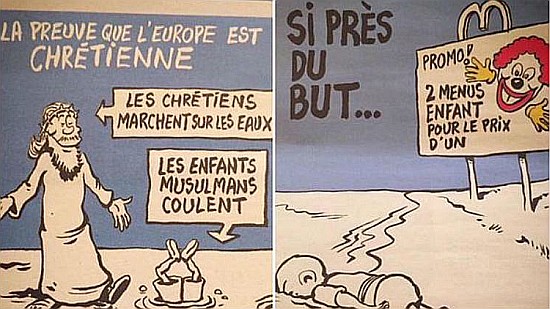 Oh no! Charlie Hebdo has done it again!

There's no mistaking the image of the child lying face down on the sand with the waves lapping his forehead — Aylan Kurdi — the toddler from Syria whose photograph unleashed unprecedented global outrage over a till then largely seen as a European 'migrant' problem instead of the refugee crisis it is.

"Welcome to Migrants" reads the headline and under that 'so close to the finish …'. Right next to the drowned toddler is a McDonald's hoarding: Two Children's-Menu for the price of one.

And for one long uncomfortable moment, the cartoon grabs you by the collar and spits in your civilised eye. But it doesn't stop there; a second cartoon holds you by your scruff and rubs your face in the very abrasive sands of Juvenalian Satire.

"The Proof that Europe is Christian" it proclaims. The cartoon this time is a Christ-like figure standing on water and next to him a drowned child. Arrow labels point to the former with the text, 'Christians walk on water' and the latter with, 'Muslim children drown'.

And how does the world react — both social and not-so-social media? With outrage and frothing at the mouth. As it should but at what is the outrage directed?

Even for those who believe in the idea of unconditional Freedom of Expression and the Right to give Offence, Charlie Hebdo images of the prophet have been time and time again uncomfortable and difficult to digest. With the assassination of the Charlie Hebdo cartoonists early this year much of the western world and almost all of those who believed in the principle of free speech and the right to Freedom of Expression rallied round the magazine and its staff showing support in many different ways. "Je suis Charlie" they wept!

Others who believed in 'conditional' Freedom of Expression 'within reasonable limits' and 'self-restraint' strongly criticized Charlie Hebdo especially pointing out the fact that it was a magazine based in France that had a sizeable Algerian muslim minority. Because anti-semitism was banned in France due to the complex history of nazism and more recent spurts of neo-nazism, they were seldom targets of Charlie Hebdo, they argued. Christianity and the catholic clergy were targeted but far less frequently than the Prophet; all complex and nuanced arguments. Why I am not Charlie! they exclaimed indignantly.

But these two cartoons that feature Aylan Kurdi is seen according to many, as Charlie Hebdo hitting a new low and touching a raw nerve. The reports on many websites and print media castigated Charlie Hebdo. Social media reproduced the images followed by comments lambasting the magazine. But even a slightly careful look will reveal, here is pure unadulterated Satire: brutal, swift, unflinching. It clearly is an indictment of the First World Nations with immediate reference to Europe closing its borders.

The thing about satire (as Wikipedia tells you) is that irrespective of the format — written, performed or pictorial — the idea is to hold up to ridicule (using irony and sarcasm) the vices, follies and abuses of individuals, the State, or society itself, ideally with the intent of embarrassing and shaming them to change their ways. As Northrop Frye says, "militant" irony or sarcasm often professes to approve of (or at least accept as natural) the very things the satirist wishes to attack.'

The purpose of satire is to invoke deep moral repugnance at what we, as a society, have become. And to that extent, with this image, Charlie Hebdo serves the purpose with an efficacy that is hard to ignore or deny. The juxtapositioning of Alan, the welcome banner for 'migrants' and the obscenity of McDonalds as an aspirational symbol for people fleeing their homes, grabs us by neck and forces us to deal with the hypocrisy of our 'Christian' kindness and charity. Refugees had been arriving in droves even before Aylan—and that included children as well — but it was the 'picture' of a drowned Aylan that smote the conscience of a xenophobic world that had closed its doors and hearts.

Satire, down the ages, has always made people uncomfortable. And that is its raison d'être. The extreme discomfort that it causes, one hopes, will change things for the better. Unfortunately in the age we live in, high sensitivity and low tolerance lead to scoring self goals by the very groups on behalf of whom the satirist speaks. We live in sad times indeed if we can no longer recognise whom/what the satirist intends to target.

'Why Are Deadly Weapons Being Sold?'