The tactics the team has adopted left everyone surprised. It was as if we were playing for draws every time we got on to the turf, and scoring goals was not in our plan of things. 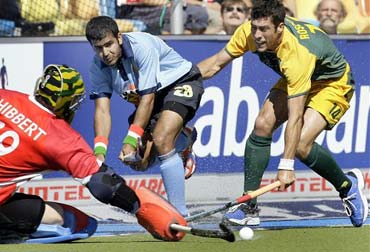 Finding India in a situation where they are languishing at the bottom of the World Cup's preliminary pool should not be a surprise, more so after the display in the first two games.

India's dreams of entering the World Cup semifinals after three decades have now vanished and they are facing acute embarrassment. After two defeats and a draw in three games, they are now out of any contention.
The way the Indian team has played and displayed its inability to capitalise on opportunities is an indication that life will only get tougher as the tournament progresses.

The body language of the Indian players is reflecting their mental condition. They don't seem to be in the contest, and conceding late goals continues to be a big problem for us.

Succumbing to intense pressure should not happen so frequently in international sport. Competing at this level, players should be accustomed to handling pressure.

Unless a dramatic turnaround takes place and sees India producing a stunning upset, we are confronted with the ignominy of finishing the pool games without a single victory.

Both South Korea and Holland will now be looking to rub salt into India's wounds, especially with the race for semifinals heating up. Posting victories and adding to their goal tally will be important for both these rivals when they take on India.

Leaving aside the game against defending champions Germany, who were not too strong coming into the tournament, India knew that their two toughest matches were the last two games.

The tournament draw suited India, allowing them to play the title-holders in an early game. Their plan and hope should have been to pick up full points from the next two outings against England and South Africa.

That would have given India a chance of making the semifinals for the first time since 1975, but it turned out to be mere wishful thinking. The Indians team could have gradually played itself into the tournament and steeled itself for the tougher contests.

Our team has shown no spark. The tactics it has adopted left everyone surprised. It was as if we were playing for draws every time we got on to the turf, and scoring goals was not in our plan of things.

Even if India failed to make the semifinals, victories against England and South Africa would have ensured that they stayed in the race for the top-six positions. Now that is looking extremely unlikely.

India allowed South Africa to dominate the proceedings in a match where we could have built on Ignace Tirkey's first-half goal, which was the result of a quick strike from the top of the semi-circle.

But India failed to increase the lead and saw South Africa bounce back to once again spoil our day after the Indian defence conceded a late equaliser.

Both teams lacked the ability to dominate for long, but South Africa had an edge as they made more threatening moves. Despite its scattered attack, South Africa succeeded in frequently putting pressure on the Indian goal.

Young defender Ramachandra Raghunath gave a good performance on his World Cup debut, even if he seemed a bit shaky handling some scooped balls. Coming into the team in place of Kanwalpreet Singh, who had a poor game against England, Raghunath's performance was among the redeeming features for India.

The Indian players' morale cannot be very high going into the match against South Korea. And the Koreans know that a win against India could lift them into the World Cup semifinals for the first time.