With the death of A.B. Bardhan, very few of the communist stalwarts who not only built the Left, but also made the Communist Parties a formidable force, are still active. 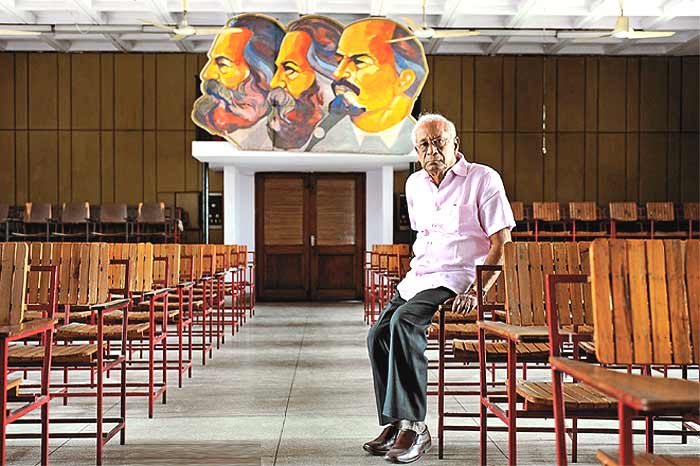 Ardhendu Bhushan Bardhan (ABB) was born in Sylhet in 1924. Even as a teenager he worked as a courier for the underground Communist Party of India, a sign of his courage when evading the colonial police. As is now known, Bardhan was moulded to a considerable extent by his initial but fairly long period of CPI activism in Maharashtra. He was critical of the very senior leader S.A. Dange, who in turn did not like the critical questioning by a younger man who considered him to be rather soft on the Congress and violating party norms of functioning. Dange tried to suppress ABB despite his relatively long service to the CPI.

ABB was sometimes unorthodox in his assessments of historical personalities, but always based them on a variety of historical facts. He was, for example, less critical of VD Savarkar than many of his Left contemporaries, pointing out that Savarkar was a freedom fighter and secular to the extent that he supported beef eating as a cheap source of protein for the poor.

He was profoundly political, fearless and prepared to differ sharply from his comrades if he thought they were wrong. On the Sino-Indian border war of 1962, he strongly criticised Nehru's "forward policy," which led to the war, and went to jail for opposing the Indian position. But during the CPI split in 1964, despite his criticism of Dange who supported the chauvinist position on the Sino-Indian war — which led many communist stalwarts to break from the CPI, and form the CPI(M) — ABB stayed on in the CPI.

Even comrades like Harkishen Singh Surjeet, a redoubtable CPI(M) leader was not fully aware of Bardhan's position on the Sino-Indian war, and thought that ABB had taken a national chauvinist position. I saw Com. Surjeet's statement in ABB's office, and he told me with some amusement that the CPI(M) General Secretary, whom he admired, was completely off the mark. Surjeet was quickly reminded by Bardhan that he had opposed the war and had been jailed for his position. He did not use the opportunity to use polemics against the CPI(M) leader, given his life long commitment to communist unity.

An outstanding organiser, theorist and one of the longest serving General Secretaries of the CPI, Bardhan will be remembered for his intellect, his voracious reading of radical texts and even for his interest in Vivekanda on which he wrote a long piece. Despite his heavy work load, ABB was always on the lookout for useful readings.

I remember him asking me for Sumit Sarkar's book on the Swadeshi movement. He went through a number of chapters with great interest. I also brought him a couple of texts on globalisation and neoliberalism, which he asked me to summarise for him. Generally he was quick to ask several intellectuals about historical and contemporary theoretical texts, which was his forte, and would incorporate these even in party documents, which he believed should substantially incorporate new developments and theoretical formulations.

He will be remembered also for his simplicity. When a party comrade's daughter Tani Bhargava came to the CPI's central headquarters in Ajoy Bhavan in New Delhi, to spruce up things, she was aghast at the lack of upkeep, and worse, in the bathrooms, water purifiers, curtains and their absence, poor lay out of the rooms, and so on. Several of ABB's shirts were in poor shape, with buttons having to be replaced. He wore his shoes at times until they were completely worn out. He didn't want his room air conditioned, though in the gripping cold of the Delhi winter, he would concede to use an old fashioned heater. He would write articles on the blank sides of old party documents, to save paper.

Bardhan loved theoretical debates. We had almost complete disagreement on Stalin and Stalinism. He had a quick look at my copy of the famous historian Isaac Deutscher's biography of Stalin and dismissed it as a distortion and "Trotskyite" propaganda. He then pulled my leg and said "You JNU fellows read the wrong books." But he smiled as he said that. When I was nominated to go to Beijing for the international conference on Socialism in 2000, he asked me to show him my draft, which I, of course, did. He made a couple of minor corrections. He wanted a complete account when I came back of what the various CPs and theorists had said. This was typical of his interest in theoretical trends in revolutionary and communist parties, and even in new Left parties coming up in Europe and Latin America.

Bardhan will be remembered most for his valiant effort to bring about a merger between the CPI and CPI(M), which did not succeed, but was testimony to his lifelong commitment to Left unity. As the quest was over, he caught my hand and said, "It will not happen in my lifetime." For me, and many others, this was a great pity. ABB was completely aware in the decline of the Left, and the need for Left unity. I will miss the discussions I had regularly with him since the 1980s till a couple of years ago. We will not see the likes of him again. Goodbye, dear Comrade! We will miss you, but never forget you.

Kamal Mitra Chenoy is a JNU professor and a member of Aam Aadmi Party.