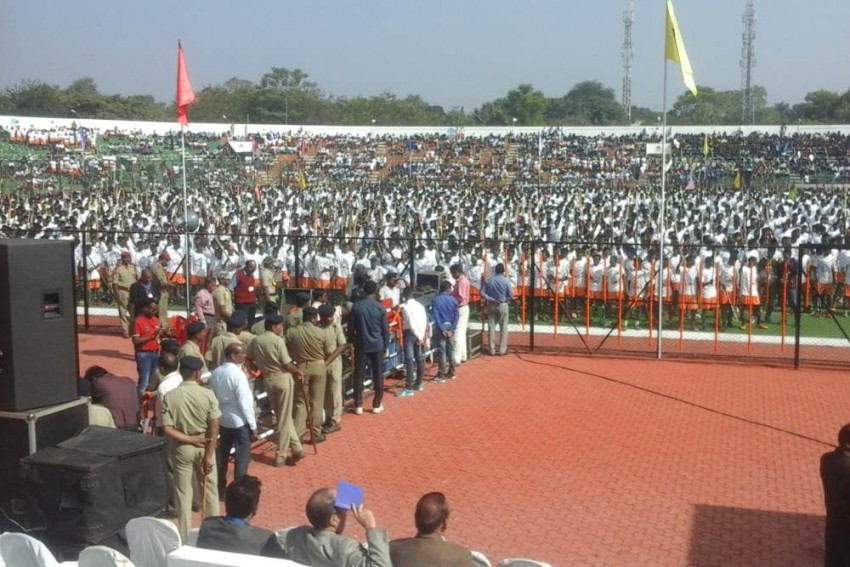 outlookindia.com
2016-12-11T10:28:19+05:30
Well over 20,000 players – all members of 1,458 teams armed with brand new graphite hockey sticks -- are attempting to make a world record. No, not for wielding graphite sticks, but for the largest number of teams competing in a hockey tournament.
On Saturday, they all descended on the Biju Patnaik Hockey Stadium for the opening ceremony as the unique tournament was launched by India’s Vice-President Mohammed Hamid Ansari here in Rourkela.
Since the registration of teams will go on for one more week, the number of teams is expected to cross 1,500, which was the original aim of former India hockey captain Dilip Tirkey, who conceived the Biju Patnaik Rural Hockey Championship about six months ago.
Although no representative of Guinness Book of World Record and the Limca Book of Records was present at the venue on Saturday, Tirkey, a member of Parliament, said that he has spoken to the two organisations and they would consider this attempt for the world record at the end of the tournament a couple of months later.
“The figure of 1,458 that I announced at the opening ceremony was of teams that had registered till yesterday (Friday). Registration of teams will go on for about a week more. About the world record, we have spoken to both the Guinness Book of World Record and the Limca Book of Records and they have sent us the procedure they follow for such events. They said they would consider the record after the tournament,” Trikey told Outlook.
The Dilip Tirkey Sports Research and Development Foundation is organising the tournament, which will be played initially on a knock-out format at 32 venues in Orissa, Chhattisgarh and Jharkhand. The top two teams from each of the 32 venues will qualify for the main round. The final is expected to be played in the first half of March.
But the cause behind organising the tournament is more important than the sheer numbers involved. Tirkey, who comes from Orissa’s Sundargarh district, a Naxal-affected area, wants the youth to take up sports and shun violence.
Tirkey, who played as a defender, has coined the slogan, “pick up hockey sticks and not guns” as the underlining theme of this tournament. More precisely, he wants the youth living in the Naxal-affected regions not to get swayed by the gun-culture, but turn to hockey and contribute to the society.
Tirkey’s idea seems to have caught the imagination of one and all, including the Vice-President. Ansari was excited what he saw on the green artificial turf at the Biju Patnaik Hockey Stadium – a sea of hockey players, both young and old, wielding hockey sticks and ready to avail this rare opportunity and showcase their talent.
“I have seen matches and political functions at stadiums, but I’ve never seen such a large gathering of players on a [single] field,” Ansari said. A warm round of applause followed from the players listening attentively and the spectators.
Ansari reminded the gathering the immense contribution of the erstwhile Chhota Nagpur area, comprising the states of Orissa, Jharkhand, Bengal, Bihar and Chhattisgarh, to Indian hockey. “They say Chhota Nagpur has been the soul of hockey; I say hockey is also in the air and water of this area. But you people don’t tell your other countrymen what the secret is of this,” he quipped, getting another round of warm applause from spectators sittingunder bright sunshine in the ‘Steel City’.
Among the spectators were some of the legendary former India players, like captain Ashok Kumar and full back Michael Kindo, who now walks with the help of a stick – both part of India’s World Cup-winning team of 1975.
Biju Patnaik Rural Hockey Championship would leave behind India’s other hockey competition that involved a large number of teams every year -- Kodava Hockey Festival, organised in Karnataka. But Biju Patnaik Rural Hockey Championship will leave that tournament well behind in terms of sheer numbers.