The finals must have hurt cricket fans in India but let me assure them their boys played fantastic cricket and they were such good ambassadors for the country. 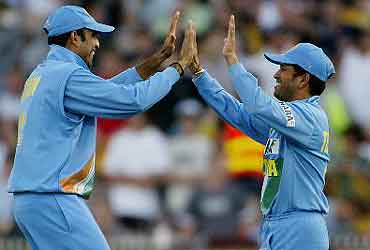 India were tremendous to watch this summer By Allan Border

India, probably, had started to think of going home.

If you are not physically steeled, long tours can mentally wear you down. I know people laugh at it but you do start missing your loved ones and families towards the end of a long trip. Your thoughts start running about issues and individuals back home.

When a side gets momentum, the luck also begins to run for them.

Australia, just before the Perth game, had started to gather momentum. The big moment for them was the return of form of Brett Lee. Adam Gilchrist and Matthew Hayden were a constant source of run-making. Damien Martyn repaid the trust just at the right time. Australia finished on a high.

Brett Lee's first catch at short fine leg was as good as it gets. Australia, towards the end, had started to produce those spectacular catches and run-outs which makes them so very special. They also did those subtle changes in the field placements, which worked well for them.

There is little doubt the Indians possess marvellous skill levels and are tremendous to watch. They missed strike bowlers all through and the absence of Ajit Agarkar and Anil Kumble at the SCG only conformed to the trend. They have improved on their fitness but physically there remains a gap between them and the Australians. The World champions do a lot of physical training outside cricket, they go to gyms and lift weights and are very intense in their work-outs. It's just the way they are, the physical attributes and all.

Sachin Tendulkar has been an interesting study on this tour. It doesn't look as if he is distracted or there is something running through his head. But he hasn't produced that sustained effort which distinguishes a champion like him. He had that marvellous innings in the Sydney Test but little else to show.

Sourav Ganguly now appears a batsman who does not relish quicker, short-pitched bowling. He began the tour fine but then Lee was not there and the wickets generally, this summer, have been batting pitches. He needs to do some work on his batting. He can probably take a leaf out of Steve Waugh's book and doesn't need to hook all the time. He must learn to get out of line of balls directed at his body.

India goes regularly with seven batters but I am not sure if this is a sound ploy. Rahul Dravid, for instance, is a batsman who appears worn down by keeping responsibilities. On this tour, whenever he has kept, his batting has fallen away. India must need to look for a proper keeper. Gilchrist is a unique asset to Australia but India needs to find its own answers. Dravid keeping wickets at best has to be a short-term arrangement. It has now continued for two years which is a too long ongoing compromise the Indians are doing with their team make-up. It is noticeable that Dravid tends not to fire whenever he is saddled with the extra responsibility.

Then, in the bowling, India appeared to be struggling with their fifth bowler. They tried to work it around Virender Sehwag, Ganguly and Tendulkar but it didn't work well. Look at Dravid's dilemma and India's worry in the fifth bowler's department, India must look to possess at least one if not two all-rounders. Somebody like Andrew Symonds, who just lends the team so much better balance. If it is possible, India should look for bowling all-rounders. Irfan Pathan has the attributes to develop into an all-rounder and I am sure the expectations would soon centre around him. But let not everyone rush things for him for he is still only a teenager. If he fills the breach, India would be blessed.

There have been suggestions that the tour programme in an Australian summer needs to be less hectic and this is an area where we have applied our minds lately. We have looked at the issue, wondered if we need to mix it up a little but this is tremendously successful and very popular among cricket-watching public.

Long tours can cause mental staleness. But a workload of 10-12 Tests and 35-40 one-day internationals a year for cricketers is reasonable. India, when it makes a point about long tours, must remember there are moments, like last year, when they played only five Tests!

The finals must have hurt cricket fans in India but let me assure them their boys had been wonderful in this Australian summer. They played fantastic cricket and they were such good ambassadors for the country. VVS Laxman, and Rahul Dravid to a lesser extent, were batsmen who came of age on this tour. Bless them for the memories and entertainment they provided on this tour.