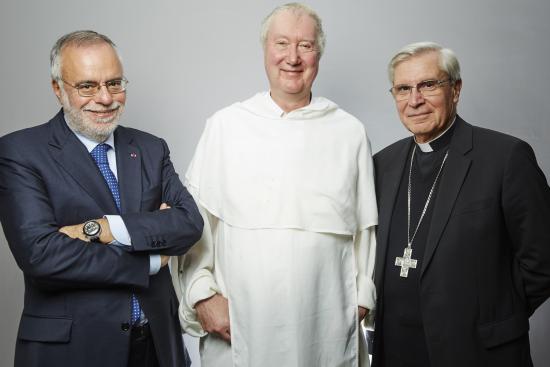 A book recently released here in Paris raises concerns about the fate of Christian minorities in India following the victory of the Bharatiya Janata Party in the Lok Sabha elections in May.

Lelivre noir de la condition des chrétiensdans le monde (Black Book on the condition of Christians in the World) is a compilation of reports and analyses from 70 contributors spread all over the world. The book has been published by XO Editions, a French publisher and is the first such global report on the situation of Christianity in the world.

At the launch of the book, Samuel Lieven, who is a journalist with the French daily, La Croix (The Cross), said that the book was extremely timely as in the last few years, attacks on Christians had increased alarmingly all over the world and today nearly 200 million Christians face discrimination and persecution, adding that the ongoing conflicts in West Asia as well as Central and Western Africa over the last few years have highlighted the situation of the religion which is ‘the most persecuted and threatened in the world’.

South Asia, with India, Pakistan and Sri Lanka, finds a significant mention as a place where the Christian minorities face serious challenges and violence. At the book release, Lieven spoke of the eyewitness accounts of persecuted Indian Christians as well as the fears of minorities, especially Christian minorities, about their religious freedom, due to the rise in Hindu fundamentalism following the electoral victory of the Bharatiya Janata Party.

The Bishop of Gap and Embrun in south-eastern France, Jean-Michel di Falco Leandri, who was one of the key people behind the book, agreed with the fears expressed in the book about the fate of Christians in India. “We have been receiving many complaints about the persecution of Christians and the fact that extreme nationalist Hindu organisations have begun to harass and discriminate against the minorities, notably Christians, since their electoral victory in May. We are worried about the fate of Christians in India,” he told Outlook at the launch event.

He said that the Church had been in touch with its Indian counterparts who had reported a renewed aggression since the May elections. He also dismissed allegations that the missionaries in India were using means like money or other baits in order to lure poor and uneducated Hindus to convert.

The book’s two Indian contributors are a priest and a French journalist of Indian origin. Vincent Kudankulam is a priest and anthropologist and he analyses the situation of Christians in India and the historical relationship between the RSS and the minorities. He argues that even though the RSS recognised Islam as a bigger threat to Hinduism, it had turned on the Christianity as it was a softer target and easier to persecute.

The other writer, Christine Nayagam, an investigative journalist who graduated in political sciences and who reports for Le Figaro newspaper and other French media, travelled to various parts of India, notably Odisha, Tamil Nadu, the North Eastern states as well as Punjab, to bring eyewitness accounts from various Christians across India on how they have been persecuted and attacked for simply practicing their religion. Citing Catholic Secular Forum, Christine Nayagam says that in 2013, seven Christians had been killed due to their religious beliefs and nearly 4000 others, including 400 priests or Church officials, attacked all over India. “During my investigations and interviews, I also noticed the differences in approach of various Christian organisations in India. Some organisations, who have a clear objective of mass conversions have been targeting Indians, especially the poorer and excluded parts of the Indian society. This shows also a clear opposition between the Catholic church organisation who are less into conversion and other Protestant or Evangelic organisations,” she told Outlook.

Some Christian NGOs were also involved in the compilation of the book. Portes Ouvertes (Open Doors), a Christian humanitarian organisation, which has also been working actively in India, helped through its chapters across the world. Its director, Michel Varton, says the situation of the Church and Christianity in India was a serious issue.

“Already our teams report an increase in attacks against Christians since Prime Minister Narendra Modi has come to power. We hope that he will respect the rights of minorities and for those who chose to leave Hinduism and embrace the Christian faith,” he says.

Varton says that as many Christians are poor and disenfranchised tribals, they are not even aware of their basic rights guaranteed by the Indian law and this is where his organisation comes in to help. “In India, Portes Ouvertes supports the local church, in areas where it is under pressure. We distribute Bibles and books. We organise seminars and training to help people who are suffering from discrimination and violent attacks. Part of this is helping simple villagers know what their rights are in a democratic country. We hold legal seminars and provide legal manuals. We have an emergency aid and relief fund for those who have been affected by persecution,” he says.

Varton goes on to say that Modi has remained silent about the increased violence toward Christians and other religious minorities, citing a report where a group of Indian religious leaders accused Modi of remaining mute in the face of 600 incidents targeting religious minorities since his landslide election victory in May.

Bishop di Falco Leandri adds that the first 100 days of the new regime have seen the rising pitch of a crescendo of hate speech against Muslims and Christians and that many people who had converted of their own free will and desire were being harassed, discriminated against and being forced to reconvert to Hinduism. He cited a report from New Delhi where church leaders alleged that in a village about 150 km southeast of Delhi, over 70 newly converted Christians had been forced to abandon their faith and their Seventh Day Adventist Church had been ‘purified’ and converted into a temple.

The coordinator of the book, Samuel Lieven, adds that the aim of the book is not to paint the Christians as victims only and that he realizes that not in every corner of the world are Christians only the persecuted and that in some places they are also the aggressors and persecutors. “Our aim is not to whitewash those Christians who are involved in crimes around the world, but a serious effort to shed light on the plight of Christians per se around the world and even in large democracies like India, where Christianity continues to be viewed with suspicion,” he said.

The publishers of the book say that the book would be used as a tool to fight for the rights of Christians around the world and that they expected translations into various languages, including Italian and English, to be released soon. They hope that this book would crystallise the Christian community leaders around the world to mount a campaign to protect and empower the persecuted communities. They added that as the book involved leaders of other religions, notably Islam and Judaism, it would help to unite various religions and not divide them further. "Part of the reason behind the violence and hatred is because of ignorance about other religions. Once people get to know and understand other religion, their fears disappear and sodoes the hatred and violence. And this is what we intend to achieve with our book," says Lieven.

Those Smuggled Spices Of Yore