A Wall As A Weapon

At most, the Hague hearings will end in an advisory ruling that the wall is illegal. It will change nothing. Any real chance for a political settlement - and for decent lives for the people of the region - depends on the United States. 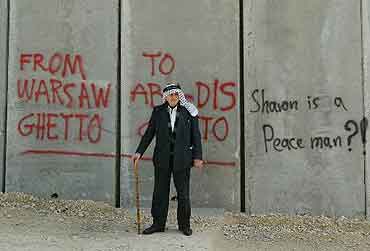 It is a virtual reflex for governments to plead security concerns when they undertake any controversial action, often as a pretext for something else. Careful scrutiny is always in order. Israel's so-called security fence, which is the subject of hearings starting Monday at the International Court of Justice in The Hague, is a case in point.

Few would question Israel's right to protect its citizens from terrorist attacks like the one on Sunday, even to build a security wall if that were an appropriate means. It is also clear where such a wall would be built if security were the guiding concern: inside Israel, within the internationally recognized border, the Green Line established after the 1948-49 war. The wall could then be as forbidding as the authorities chose: patrolled by the army on both sides, heavily mined, impenetrable. Such a wall would maximize security, and there would be no international protest or violation of international law.

This observation is well understood. While Britain supports America's opposition to The Hague hearings, its foreign minister, Jack Straw, has written that the wall is "unlawful." Another ministry official, who inspected the "security fence," said it should be on the Green Line or "indeed on the Israeli side of the line." A British parliamentary investigative commission also called for the wall to be built on Israeli land, condemning the barrier as part of a "deliberate" Israeli "strategy of bringing the population to heel."

What this wall is really doing is taking Palestinian lands. It is also - as the Israeli sociologist Baruch Kimmerling has described Israel's war of "politicide" against the Palestinians - helping turn Palestinian communities into dungeons, next to which the Bantustans of South Africa look like symbols of freedom, sovereignty and self-determination.

Even before construction of the barrier was under way, the United Nations estimated that Israeli barriers, infrastructure projects and settlements had created 50 disconnected Palestinian pockets in the est Bank. As the design of the wall was coming into view, the World Bank estimated that it might isolate 250,000 to 300,000 Palestinians, more than 10 percent of the population, and that it might effectively annex up to 10 percent of West Bank land. And when the government of Ariel Sharon finally published its proposed map, it became clear that the wall would cut the West Bank into 16 isolated enclaves, confined to just 42 percent of the West Bank land that Mr. Sharon had previously said could be ceded to a Palestinian state.

The wall has already claimed some of the most fertile lands of the West Bank. And, crucially, it extends Israel's control of critical water resources, which Israel and its settlers can appropriate as they choose, while the indigenous population often lacks water for drinking.

Palestinians in the seam between the wall and the Green Line will be permitted to apply for the right to live in their own homes; Israelis automatically have the right to use these lands. "Hiding behind security rationales and the seemingly neutral bureaucratic language of military orders is the gateway for expulsion," the Israeli journalist Amira Hass wrote in the daily Haaretz. "Drop by drop, unseen, not so many that it would be noticed internationally and shock public opinion." The same is true of the regular killings, terror and daily brutality and humiliation of the past 35 years of harsh occupation, while land and resources have been taken for settlers enticed by ample subsidies.

It also seems likely that Israel will transfer to the occupied West Bank the 7,500 settlers it said this month it would remove from the Gaza Strip. These Israelis now enjoy ample land and fresh water, while one million Palestinians barely survive, their meager water supplies virtually unusable. Gaza is a cage, and as the city of Rafah in the south is systematically demolished, residents may be blocked from any contact with Egypt and blockaded from the sea.

It is misleading to call these Israeli policies. They are American-Israeli policies - made possible by unremitting United States military, economic and diplomatic support of Israel. This has been true since 1971 when, with American support, Israel rejected a full peace offer from Egypt, preferring expansion to security. In 1976, the United States vetoed a Security Council resolution calling for a two-state settlement in accord with an overwhelming international consensus. The two-state proposal has the support of a majority of Americans today, and could be enacted immediately if Washington wanted
to do so.

At most, the Hague hearings will end in an advisory ruling that the wall is illegal. It will change nothing. Any real chance for a political settlement - and for decent lives for the people of the region - depends on the United States.

The Hunt For Osama