'A Vegetarian, A South Indian, A Gentleman ...'

And Yet A World-Class Fast Bowler ...Indeed, Srinath can justly claim to have smashed a fourth, even bigger stereotype: that small-towners who do not don sun cream and goggles are inferior to their urban counterparts. 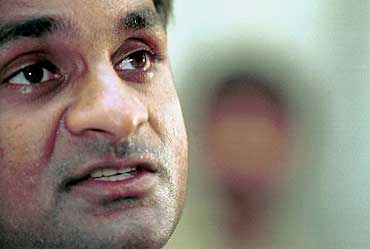 outlookindia.com
-0001-11-30T00:00:00+05:53
Like with most small-town celebrities, there are dozens of apocryphal stories, embellished with each telling, about Javagal Srinath. There is one about how, when he was a little cricketer in Mysore, the seniors in the team would stuff his pockets with 'upma', so that the boy who bowled well but disliked fielding would not get bored at long-leg. And then there is another about how he turned up late for a match because he was having an "oil bath", complete with the 'shikakai' powder his father manufactured.

Mostly because of his disdain for reporters who don't use "tall, lanky and gangling" in the same sentence, none of those stories ever got confirmed. But photographer Pradeep Mandhani recalls a tale that puts the tall, lanky and gangling bowler's attitude in perspective. The lensman once asked him the question that all India had in mind: "Sri, why don't you glare at the batsmen and rattle them a bit?" Unfazed, the engineer-turned-destroyer reportedly said: "What's the point, I say, they are all uneducated fellows."

As the historian Ramachandra Guha wrote earlier this year, Srinath is a man who has successfully challenged three stereotypes: "He is a vegetarian, a south Indian, and a gentleman, and yet-a world-class fast bowler." Indeed, as he prepares to hang up his boots after 64 Tests and 232 wickets at 30.46 apiece, Srinath can justly claim to have smashed a fourth, even bigger stereotype: that small-towners who learn their craft on matting wickets and do not don sun cream and goggles are inferior to their urban counterparts.

When Srinath was first spotted by Karnataka's selectors in the late '80s, few predicted he would come this far. Some saw his selection as a tiny morsel thrown at mofussil mongrels questioning the over-dominance of Bangaloreans in the State team. Some others wondered if fast bowling was the right profession for an all arms-and-legs lad who came from a laidback pensioners' paradise without a turf wicket. And still some others simply asked if a veggie had the fire in the belly to test the best.

More than a decade later, Srinath exits the scene---unless he agrees to stay on for the Tests in England after the one-day series---as the second most successful fast bowler in the history of Indian cricket after Kapil Dev, leaving the likes of Mohammed Nissar and Amar Singh, Dattu Phadkar and Ramakant Desai, Karsan Ghavri and Madan Lal far behind. And arguably the fastest ever. At least no one who ate a dosa and a masala vada every afternoon at the Iyer's canteen in Marimallappa's College bowled this fast.

Kiran More, who kept wickets to Kapil too, remembers the ball thudding into the gloves when Srinath came on. And Srinath's onetime new ball partner B.K. Venkatesh Prasad declares: "As far as my knowledge goes, he is the fastest bowler India has produced, and it's no mean achievement to take 200-plus wickets in Test cricket. Being a fast bowler, playing on Indian wickets and getting so many wickets is a remarkable achievement. I would place him in the same class as Donald, Pollock and McGrath."

After less than half the Tests Kapil played (131), Srinath ends up a little over 200 wickets shy of the tally of 434, and well short of the great allrounder's fame, glamour and charisma. But numbers don't lie. After playing in Kapil's shadow initially, they are almost on a par wicket for wicket, Srinath averaging 26.41 per wicket to Kapil's 26.49 at home; and 33.76 to Kapil's 32.85 away. Except in Australia and West Indies, Srinath stands cheek-by-jowl Kapil. Butter chicken, anybody?

Remembers Srinath's first captain Roger Binny: "He was originally an in-swing bowler but he worked hard and improved on the out-swinger that it became his wicket-taking ball. He had a lot of stamina and was not the type to give up."

He may not have hit four sixes in a row to save a Test match. He may not have bagged ten wickets in an innings. But Srinath's impact goes beyond the field. Be it in becoming a model for mofussil cricketers to emulate, be it in exhorting budding cricketers to concentrate on their studies, be it in asking us to save the tiger, be it in endorsing an infotech training institute, Srinath's gentle civility is a reminder of how rooted he still is.

Which is why, the retirement, although in the air, has caught fans napping. Should he have left one-day cricket to concentrate Test cricket is the question everyone is asking. After all, he was bowling at the peak of his form. After all, Srinath the one-day bowler was never in the same class as Srinath the Test bowler. Although the 13 wickets in the Caribben came at a very high price of over 42 runs apiece, Srinath bowled exceedingly well, although luck was not with him. Moreover, England---where Srinath played one season as Courtney Walsh's replacement in Gloucestershire---was just the doctor ordered to get the adrenaline pumping again.

But then, as an old master said, it is perhaps best to quit on a high and leave people wondering why.

'India Has The Makings Of A Good One-Day Side'