'It's good for America, it's good for India and it's good for the international community,' argued the US Secretary of State and strongly argued that "this initiative does not complicate [US] policies toward countries like North Korea or Iran.' 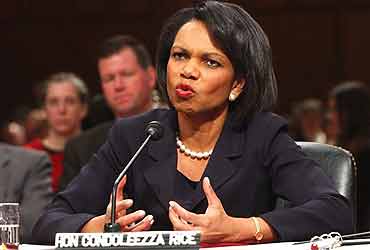 The U.S.-India Civil Nuclear Cooperation Agreement: Opening Remarks Before the Senate Foreign Relations Committee by the US Secretary of State at Washington, DC, April 5, 2006

Condoleezza Rice: Thank you very much, Senator Lugar, Mr. Chairman, members of the Committee. Thank you very much for this opportunity to come and discuss with you this indeed path-breaking U.S.-India civil nuclear cooperation agreement and it obviously deserves the support of the U.S. Senate, but we also understand that it deserves the thorough review of the Senate before giving that support. So that is why I'm here and I want to note that we are prepared to continue our discussions and our briefings to the point that you feel that you have the information that you need to make this determination.

Let me note that I have longer -- a fuller testimony that I would like to have entered into the record.

Chairman Lugar: It will be made part of the record, in full.

Condoleezza Rice: Thank you very much. India's society is open and free. It is transparent and stable. It is multiethnic. It is a multi-religious democracy that is characterized by individual freedom and the rule of law. It is a country with which we share common values. India will soon be the world's most populous nation and America's exports to India have doubled in only the past four years. And of course, India is a rising global power that we believe can be a pillar of stability in a rapidly changing Asia. In other words, in short, India is a natural partner for the United States.

But for too long during the past half-century, during the Cold War in particular, because of both domestic policies and foreign policies, India and the United States were estranged. And one element of this estrangement was India's complete disregard -- India's complete isolation from the policies that the United States was concerned about concerning proliferation of weapons of mass destruction. Now, as a result of India's decision to have a nuclear program, to test nuclear weapons, to build a nuclear program, as did Pakistan, India's adversary in that region, we adopted nonproliferation policies to try and constrain and change Indian behavior.

But I think that it is entirely clear now that those past nonproliferation policies did not achieve their goals. In fact, they had no effect on India's development of nuclear weapons. They didn't prevent India and Pakistan from testing nuclear weapons in 1998. They contributed little to lessening regional tensions, which brought India and Pakistan repeatedly to the brink of war. And all of this simply resulted in a more isolated India, especially isolated from the standards and practices of the nuclear nonproliferation establishment that had been developing and maturing over the last decades.

Now, let us consider the future that we could have instead. The initiative that we are putting before you and asking for legislation to amend the Atomic Energy Act of 1954 will advance international security, enhance energy security, further environmental protection, and increase business opportunities for both our countries. All of these benefits must be viewed in this larger context, of course, of how the initiative itself elevates the U.S.-India relationship to the new strategic level that we desire.

The initiative, first and foremost, will deepen that strategic partnership. The United States and India are laying the foundation for cooperation on major issues in the region and beyond, building on and building up our broader relationship between our peoples and governments. I was just with President Bush in India and I can tell you that the discussion was broad and multifaceted. It was a discussion not just between governments, but between peoples, discussions about how to improve agriculture in India, much as we helped to spur the Green Revolution in India of the '60s.

We talked about the ability for India to access the new technologies to increase its agricultural production. There were discussions about Indian education and the desire for all of India's people to be able to access the new knowledge-based economy that is growing so rapidly in India. And of course, there were discussions between CEOs of Indian companies and American companies, showing that this is a broad relationship that is not just a government-to-government relationship, but one that is fundamentally affecting our societies.

Now, in order to fully realize the potential of this vision for India, we do have to deal with the longstanding impediments associated with civil nuclear cooperation and we need to resolve them once and for all. We believe that this initiative will unlock the progress of our expanding relationship in other areas.

The initiative will clearly enhance energy security. India's a nation of over a billion people with an economy growing at approximately eight percent each year. It has a massive and rapidly growing appetite for energy. It is now the world's sixth largest consumer of energy. Diversifying India's energy sector will help it to meet its ever increasing needs and more importantly, ease its reliance on hydrocarbons and unstable sources like Iran. This is good for the United States.

Secondly, the initiative will benefit the environment. Nuclear energy is, after all, clean energy and providing India with an environmentally friendly energy source like nuclear energy is an important goal. India's carbon emissions increased 61 percent between 1990 and 2001; that number is surpassed only by China. This initiative will create opportunities for American jobs. Nuclear cooperation will provide a new market for American nuclear firms, as well as assist India's economic development. The initiative may add as many as three to 5,000 new direct jobs in the United States and about 10,000 to 15,000 indirect jobs in the United States, as the United States is able to engage in nuclear commerce and trade with India. By helping India's economy to grow, we would thus be helping our own.

I must just note that the custodian of the nonproliferation regime, Mohamed ElBaradei, has been from the very beginning a strong supporter of this initiative and he remains so. I should note also that Great Britain and France are strong supporters and Russia supports it as well. Both Prime Minister Blair and President Chirac have issued statements in that regard.

Now, I want to take just a moment to take head on, if you will, several criticisms that have made of the initiative. And let me associate myself with what the Chairman said, it is a path-breaking agreement. And of course, one always has to balance the various factors in deciding whether or not it is worth pursuing. We believe that the criticisms can be addressed and I will address them here.

First, India would never accept a unilateral freeze or cap on its nuclear arsenal. We raised this with the Indians, but the Indians said that its plans and policies must take into account regional realities. No one can credibly assert that India would accept what would amount to an arms control agreement that did not include other key countries, like China and Pakistan.

Second, the initiative with India does not seek to renegotiate or amend the NPT. India is not and is not going to become a member of the NPT as a nuclear weapons state. We are simply seeking to address an untenable situation. India has never been party to the NPT and this agreement does not bring – but this agreement does bring India into the nonproliferation framework and thus strengthen the regime.

Third, civil nuclear cooperation with India will not lead to an arms race in South Asia. Nothing we or any other potential international suppliers provide to India under this initiative will enhance its military capacity or add to its military stockpile. Moreover, the nuclear balance in the region is a function of the political and military situation in the region. We are far more likely to be able to influence those regional dynamics from a position of strong relations with India and indeed with Pakistan.

Fourth, this initiative does not complicate our policies toward countries like North Korea or Iran. It is simply not credible to compare India to North Korea or to Iran. While Iran and North Korea are violating their IAEA obligations, India is making new obligations by bringing the IAEA into the Indian program and seeking peaceful international cooperation.

Iran and especially North Korea are, of course, closed non-democratic societies. India is a democracy. In fact, India is increasingly doing its part to support the international community’s efforts to curb the dangerous nuclear ambitions of Iran.

In sum, the U.S.-India civil nuclear cooperation initiative is a strategic achievement. It’s good for America, it's good for India and it’s good for the international community. I know that there is a history that we are trying to overcome, but the time comes when you must deal with the realities and indeed overcome that history.

President Bush and I look forward to Congress as a full partner in this initiative. Your support for this legislation is crucial and we ask you to lend it. Together we can seize this tremendous opportunity to solidify a key partnership that will advance American interests, the ideals of peace and prosperity and liberty for which we stand.

Thank you, Mr. Chairman. I very much look forward to answering the questions of the distinguished members of the Committee. Thank you.

'Welcome To The World Stupid Forum'