A Sip Of Healthy Scepticism

I doubt, therefore I am an aware customer. I fight with Delhi Jal Board officials on water quality. I also fight with my mind whenever I pass grocery stores stocked with Coke. 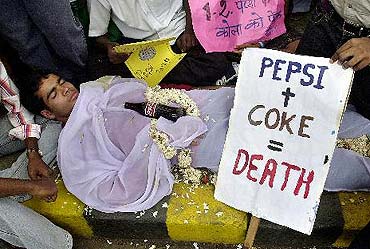 I better begin straightaway with a confession. I like Coke. And I don’t like any other carbonated drink. I suspect I’m addicted to Coke a bit. I love the wonderful thing chilled Coke does to my throat. I always thought it was the carbon dioxide. Now I think maybe it’s the pesticides too.

Which leads me to a greater worry. Is pesticides part of the secret formula in Coke? Are pesticides addictive? Are pesticides also the secret ingredient in the famed curry of Rajinder Da Dhaba, the eating joint next to our office, which attracts people of all shirt- and purse-sizes every evening, like flies to a carcass? Are pesticides part of the charm and flavour of the globally known Indian basmati? It could be, because according to the Gurgaon’s Centre for Sanity and Balance in Public Life, an NGO made of less stern stuff than the Centre for Science and Environment, a handful of uncooked rice contains 751 mg of pesticides, as much as three small tablets. And what about our renowned Darjeeling tea? A cup of tea has 14 mg of pesticides, twice the size of the aspartame tablet you drop in it. By the way, I’m addicted to Darjeeling tea and rice too!

But one swallow does not a summer make. Wait, I know many people who are addicted to rice and tea. Chinese, Thais, Bengalis and Keralites, for example. But then, while Kerala has banned Coke, for reasons connected less with pesticides and more with a sharp drop in groundwater level, Bengal politicians feel there’s as much wrong with Coke and Pepsi as with their own groundwater. So that causal connection too seems invalid.

But there has to be something in my "some - amount - of - pesticides - are - addictive - or - at-least -not-harmful - to - health" suspicion. Why else would our government allow it? Unlike CSE, what the Gurgaon Centre has pointed out is not the result of its own investigation, but generally known facts about the Prevention of Food Adulteration Act. This law lays down permissible limits of foreign elements in your food and drink, including how much rat-droppings etc can be allowed in grains (the Act was written when all rice was stocked in presumably rat-infested government godowns). Bet you didn’t know that!

Unfortunately, this kind of nullifies the government-knows-best theory. So what, do colas have pesticides or not? Should we glug them as we do, like water? What about the kids swayed by film-stars cradling a branded bottle? The government committee (the health ministry shoots off again) says no pesticides. So, is Sunita Narain, a very reputed, globally acclaimed environmentalist, wrong?

After the long CSE-cola company tussle, we now know a few things conclusively.

A. All things have pesticides, other non-edible particles, etc but it’s the proportion that’s important, like the dose in allopathic medicine. How much is too much? The consumer must find out and decide for herself.

B. While poorer countries are lax in monitoring food products, the evil exists in developed countries too. Coke has fought several suits on health grounds (junk drink, obesity) in the US and it is banned (or sought to be banned) from most schools and many colleges and university campuses, like Sussex in the UK or Rutgers in New York (for labour practices in Colombia). The British student movement also takes cognizance of the environmental damage by Coke in India. The very strong environmentalist movement in such countries has triggered a craze for super-expensive organic foods, which is catching on in India too. Perhaps this environmental bashing of Coke will give rise to, like in the west, organic colas in India.

C. MNC-bashing is a useless pastime. They are soft targets, easy to abuse, and tough to change. Coke especially has been slow to change, basking in the limelight of "the most successful product in the history of commerce" (its Atlanta HQ flaunts this line), while Pepsi, under iron lady Indra Nooyi, has made a conscious move towards Tropicana juices and Gatorade sports drinks and raised profits too. But it’s not only the MNCs which get away with flouting the law, other smaller companies do too. The culprits here are weak law (with loopholes), bad monitoring, and bribe-able administrators of the law. What happens when your neighbourhood sweet shop sells you stuff fried in days-old oil and gives you food poisoning? What action do you take, other than to stop buying? So if you think colas are bad for your health, switch to the drink you want. In a free market, consumers decide with their feet.

D. Kids aren’t really crazy for colas (a greater number is crazy about mango and other fruit-drinks actually). They are also more updated than we usually are—at least most of those who watch TV. If colas are not available in their school canteens anymore, their curious mind will find out why and digest the reason. If they don’t, their parents will have to raise their awareness.

E. And most important, with or without pesticides, colas are still bad for health and are actually junk food. It is nothing but coloured sugar water and is probably more harmful than the coloured sugar water you might make at home. We all know junk food is popular, as are liquor, cigarettes, ganja or other drugs, but it’s actually dal-chawal that’s consumed by all.

Trust me. I have a feeling that the persistent knee-pain that I’m having for the past year or so could have something to do with my Coke ingestion. Or is it the salty borewell water south Delhi consumers are destined to imbibe? I doubt, therefore I am an aware customer. I fight with Delhi Jal Board officials on water quality. I also fight with my mind whenever I pass grocery stores stocked with Coke.