For him, politics was not an end in itself, he made it meaningful. When he stepped into Chitrakoot, he was already 75 years old. In a brief period he demonstrated the viability of a self-reliant village community. 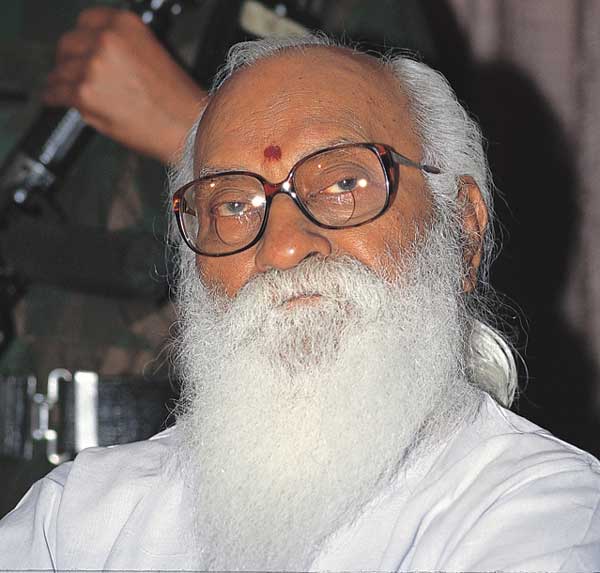 Tributes to Chandikadas Amritrao " Nanaji" Deshmukh (October 11, 1916 – February 27, 2010) have largely dwelt upon his role in the political arena, his seminal contribution in the opposition space, particularly in the anti Emergency movement. His equally, if not more relevant contribution was in developing a model of development, proven and tested, which is an answer to the low level equilibrium trap that the agriculture sector finds itself in today. He is perhaps the only person in public life after Mahatma Gandhi for whom politics was not an end in itself, he made it meaningful, by testing development propositions in actual practice.

He conclusively demonstrated the viability of Mahatma Gandhi’s ideal of self-reliant village communities, and that too only in the last two decades. At a time when the agricultural sector, supporting 65 per cent of the population, contributes only 20 per cent of the GDP, the result of Nanaji’s efforts through the Deendayal Research Institute in Chitrakoot provide a proven model of development for rural India, both economic and moral, towards achieving the ideal of Ram Rajya. The most significant evidence is demonstrating the economic viability of a marginal land-holding of 2.5 acres for a family of six, significant for a country where 80 per cent of its rural population comprises marginal farmers. His achievements are significant, as his methods they do not entail any additional use of resources, and could be used as models for optimal use of governmental and developmental schemes.

Chitrakoot (and 600 villages there) is a remarkable story on five different counts. First, it establishes and proves the ideal of a self-reliant village community; second, it fills a valuable gap in the delivery mechanism of the state ensuring effective implementation of government schemes; third, the emphasis has been to make the villagers self-reliant, without making them dependents in perpetuity; fourth, the entire exercise has been carried out by defining, adopting, and following processes for activities and functionaries, regularly tested and audited towards ensuring the desired output. This enables a replicable model anywhere in the country. Fifth, and perhaps the most significant, is the high degree of morality permeating all activities — an essential attribute of Ram Rajya and a platform for moral elevation in our polity.

Consider the facts. When Nanaji stepped into Chitrakoot in 1991, it was a semi-arid area straddling the border between Madhya Pradesh and Uttar Pradesh with water tables at the depth of 250 to 300 feet, marginal holdings with a single crop, populace prone to water-borne diseases, sustainable livelihood virtually impossible without being supplemented by remittances from migrants.

Today, not only has migration stopped, but people are returning and marginal land-holdings (1.5 acre irrigated and 2.5 acres non-irrigated) are providing sustainable livelihood to families of six. Nanaji chose Chitrakoot inspired by the example of Ram in exile, who without any state power showed the path of self-reliance and self-confidence to a distressed and oppressed people. He was motivated by the ideology of his close friend Deendayal Upadhyaya. This model has been duplicated, on a smaller scale, in Gonda and Beed in Uttar Pradesh and Maharashtra.

The focal point of all activities is a graduate couple, called Samaj Shilpi Dampati. They live in a village and are responsible for a cluster of five villages. All programmes of the DRI are implemented through this graduate couple. They document every activity and the results thereof, acting as enablers for the villagers they are responsible towards in accessing education and Government programmes and schemes, careful documentation, generating valuable data for assessment and planning.

The manner in which self-reliance and empowerment have been propagated is evident from the schemes in various sectors.

Common ailments afflicting the population are addressed through Ayurveda and naturopathy. Locally available Ayurvedic herbs and preparations are put together into a mobile medical kit for the Samaj Shilpi Dampati. This is realistic for treatment of common ailments, instead of allopathic medicines which are costly and impractical in a doctor:population ratio of 1:10,000. Research into Ayurveda is carried out in an institute funded by the Tatas, where new medicines are developed. Interestingly, the JRD Tata Aarogyadham Institute has also developed a simple water purification procedure using hot wooden coal, costing less than a rupee, an improvement on the Tatas’ own low-cost filter currently being marketed. The objective is to scale up operations to market the medicinal products to make this activity a profit centre.

The transformation in agricultural output and productivity has been achieved through effective watershed management, availing of Government grants and the Krishi Vigyan Kendras of ICAR. The Krishi Vigyan Kendra’s water-harvesting techniques have shown astounding results, at some places water tables having risen 150 feet, enabling irrigation and consequently multiple cropping. Apart from multiple cropping, the viability of marginal holdings is enhanced by inter-cropping fruits and vegetables along with animal husbandry. With regular interaction and intervention through the graduate couple, the DRI has been able to arrive at an ideal balance of different economic activities (crops, fruits and vegetables, animal husbandry) for marginal land holdings, both irrigated and non-irrigated. The significance of this achievement cannot be highlighted sufficiently.

The value chain of processing agricultural output is carried forward in Udyamita Vidyapeeth where agricultural products are processed and packaged for commercial sale. The Vidyapeeth also has other economic activities like making products for local use — for instance, tiles, bricks, handicrafts. The Vidyapeeth, in consonance with Nanaji’s vision of every activity being self-sustaining, trains landless who are encouraged to form self-help groups. Moreover there is a scaling up of operations, the accent being on quality towards which FPO and ISI certification has been obtained for different products for sale in a larger market.

Even in the sphere of education the innovative gurukul model has been adopted. Each gurukul houses 80 children with retired couples looking after groups of 10 children. The children are inculcated with values to study in groups in an inspiring atmosphere.

While, the above are some of the activities of the institute, the most important aspect of its functioning is the strong accent on establishing management practises and resource improvement at every juncture, which is achieved by a collection of detailed information on all activities, processes and functionaries, and planning future steps on the basis of such information and analysis.

While such systems are commonplace in the corporate world, they are rare in the NGO sector where efforts are individual-centric and organisations become subject to the efforts or the lack of it of the individual involved. This is not to downplay the role of the individual in any manner. In fact, the role of the individual gets well-defined when systems are put in place. Nanaji’s foresight also included that of putting a team together which helped him immensely in charting out the path and is in place to carry forward his legacy. His successors, who he described as his four atmas are led by Mr Vasant Pandit, Mr Bharat Pathak, Ms Nandita Pathak and Mr Jeh Wadia.

The moral elevation which Nanaji provided by sheer force of example provides a direction to the country, a telling instance being that the number of litigations in Chitrakoot has been brought down drastically by virtue of his efforts in endeavouring to create a Ram Rajya and amity between all sections of people.

It is instructive to note that Nanaji stepped into Chitrakoot only in 1991 when he was already 75 years old. In a brief period he demonstrated the viability of a self-reliant village community. It is six decades since we became a republic and already our policy-makers have given up on the rural population, considering them to be fit only for cash doles in the form of NREGA, condemning them to a life of dependency, rather than empowering them. Unfortunately, for today’s political class, politics is a business where the accent is on garnering more money to outspend/ divide rivals and win elections, that being an end in itself.

Nanaji’s achievements have been consistently ignored.

For responding to the author, please write to uhazarika@hazarika.in