A Moment Of Catharsis In Delhi's Ridge

Sitting on a dusty platform in a dusty forest, with hens and tinsel around me, I wept and wept for my mother. In a way I hadn't in my own church, surrounded by my own icons. 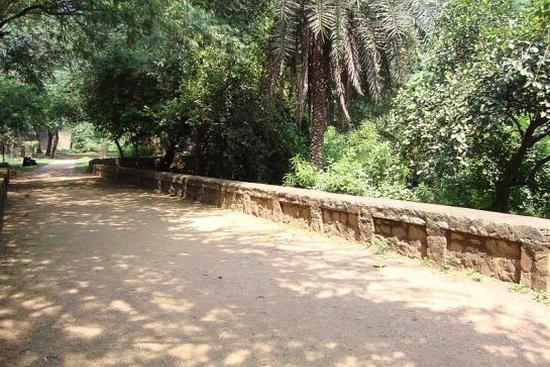 If it's not disrespectful to say so, I always think of St. Paul the Apostle as being something of an old curmudgeon. There is absolutely no empirical proof to back up this gut feeling I've had since childhood, but there you go. Possibly it was all his endless sermons and letters that we had to listen to in Religious Education classes, back in the day. Basically, yes, I just took against him, completely irrationally, and so (poor chap) an old curmudgeon he has always remained for me.

St. Paul, of course, is the man who gave us that expression "the road to Damascus." And what a road to Damascus moment his was. There he was, called Saul then, dashing off to Damascus to persecute Christians, whom he loathed with a passion, when he had a visitation from on high. Christ, the very figure he hated so vehemently apparently spoke to him, and persuaded him to stop persecuting people who believed in a different religion. Saul became Paul, and he was a totally changed bloke after that.  Instead of persecuting Christians, he wrote letters and epistles and sermons galore.

And so it is that “the road to Damascus” has become a euphemism for someone undergoing an abrupt change of heart, often in the religious department, but also in the political department too. For example : one minute you're banging on about how bad x, y or z is, and the next moment you're all in favour of x, y or z.  That kind of thing.

Now I can't be so pompous as to say I had a road to Damascus moment recenty when I was out running, but it sort of felt like that, and I can't actually think of another turn of phase. “Having an epiphany” would probably work, but I am irrevocably committed to my St. Paul imagery now.

It had been a month since my mother died, and so, when out on my marathon training run, I had specifically planned to go past the Sacred Heart Cathedral in Delhi.  In I went and knelt down and said my prayers. I knelt there and prayed for her, and felt suitably maudlin. And then (perhaps a tad crassly) I restarted my GPS and continued on my run.

My running route that morning took me along some unexpected roads, mainly because much of central Delhi had been closed off and barricaded, pre-Republic Day.

And so, bored by running along a traffic-packed road, deep breathing car exhaust fumes, I turned down a lane into the remnants of Delhi's Ridge. Don't get me started on how how dreadfully we treat this precious ancient green lung, but suffice if to say there were plastic bags and mounds of stinky rubbish galore. There were also rather too many Rhesus Macaques for comfort. It was definitely foolish to continue running along this dirty, macaque-d track, but I did.

Watched by rather too many red bottomed macaques, as they languidly poked through the plastic bags and polystyrene littered all over the place, I trotted along. And then suddenly there was a wonky handwritten sign nailed to a tree, announcing an 800 year old dargarh. So off I trotted even further into the forest.

I know I know, so not recommended behaviour.

The shrine consisted of four or five tombs, and the central one of the Pir, which has a tiny cover built over it. To get inside you would need to kneel down and almost crawl inside. There was a small group of men lolling around, who politely offered me tea.

There was a delightfully fat goat. A handful of chickens and a rather scrawny cockerel which strutted around, in true Delhi Boy fashion. Tinsel in the trees, dried marigold garlands. A few plastic bags.

And as I sat there, the tears for my late mother suddenly came pouring out. Sitting on a dusty platform in a dusty forest, with hens and tinsel around me, I wept and wept for my mother. In a way I hadn't in my own church, surrounded by my own icons.

No idea what precipitated the grief, but in a place that was as far away from my mother's comfort zone as possible, grief came spontaneously.

My weeping over, with the lolling men looking decidedly wretched about this mad old feringhi sobbing away to glory, I went on my way.  Back into the rubbish-strewn, red-bottom-macaqued forest, feeling strangely at peace.

Not quite Damascus. But the sense of catharsis was huge.

Read This Article, Change Your Life