A Metaphor For Life 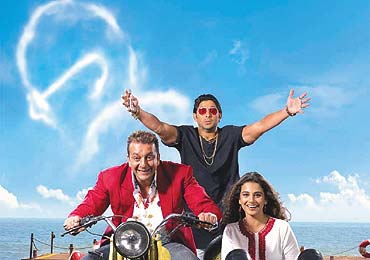 outlookindia.com
-0001-11-30T00:00:00+05:53
Lage Raho Munna Bhai is a striking film partly because it resurrects the Mahatma as a popular icon - not just as a distant nationalist figure, but as the personal Mahatma that he always was in the sense that Shahid Amin has documented in his classic study on Chauri Chaura. The second striking feature about the film, and one that reflects a wider trend in Bollywood, is the prominence of cricket terminology as a metaphor for life.

The disputed house at the centre of the film’s plot is called "Second Innings House": the old men living in it determined to play their "second innings" in life on the "front-foot", after having played the "first innings on the back-foot". When Gandhi asks the protagonist to follow the path of truth, he responds by articulating his doubts in the language of cricket. The truth would get him "clean-bowled." When Munna Bhai and Circuit take on an astrologer at the end of the film, they try and dispel superstition by a cricketing analogy: "If he was so good he should point out Indian cricketers whose horoscopes forecast centuries and the team would never lose. It would always score 1100 not out."

The film itself has nothing to do with cricket but cricket jargon has been so thoroughly enmeshed into its script that it points to a wider process. Cricket is now so enmeshed in the social life of India that for the Indian it has ceased to be a game. It is a social practice that forms the background of everyday life. Indeed, it is a metaphor for life. Bollywood cannot help but tap into this wider sociological trend.

Lage Raho Munna Bhai is not the first film that reflects this process. In Kaante, Mahesh Manjrekar’s character spouts: "Hindustani do cheez bardaasht nahi kar sakta. Kashmir mei war aur cricket mei haar [An Indian cannot tolerate two things: war in Kashmir and a loss in cricket]". In Tathastu, a film about the intensity of parenthood, the entire father-son relationship is built around watching cricket on television and grooming the son to be a cricketer. When the son gets admitted to hospital with a severe illness, the father poignantly tells him: "Get well soon so we can play cricket together". These kind of films are different from the cricket-oriented films that were made in the eighties and early nineties. Films like Awwal Number and Chamatkaar had plots that centred around cricket. What is happening now is different. Lagaan reflected the populism of cricket as an agent for nationalist agency but the game has now seeped into the everyday language of Bollywood.

This Indianisation of the imperial sport, of course, began in the colonial period itself but vernacularisation of its terminology first began with All India Radio’s commentary. Arjun Appadurai has documented how this process unfolded through the 70s and a number of scholars have focused on how television, in particular, turned cricket into the national game from the 1980s onwards. In this respect, Arjun Appadurai has equated cricket’s rise with the complex process of decolonisation and the making of a new Indian identity:

"The general force of the media experience is thus powerfully synaesthetic.

Cricket is read, heard, and seen, and the force of daily life experiences of cricket, occasional glimpses of live cricket and stars, and the more predictable events of the cricket spectacle on television all conspire not just to vernacularise cricket but to introject the master terms and master tropes of cricket into the bodily practices and body-related fantasies of many young Indian males….cricket is simultaneously larger than life and close to life, because it has been rendered into lives, manuals, and news that are no longer English-mediated…the reception of cricket becomes a critical instrument of subjectivity and agency in the process of decolonisation ." (Modernity at Large: Cultural Dimensions of Globalization).

Cricket historians such as Ramachandra Guha and Boria Majumdar have shown how cricket always had a political dimension in India and the striking pre-eminence of cricket in the Indian imagination is deeply rooted in a set of complex and contradictory processes that parallel the emergence of an "Indian" nation itself. In that sense, Ashis Nandy was right when he said: "Cricket is an Indian game, accidentally invented by the British."

The point is that cricket, in the Gramscian sense, is now a central pillar of the cultural superstructure of India. Bollywood is the second pillar of this superstructure and the two have now begun interfacing. Popular culture is a highly contested arena where the idea of India is always fought over. It is a relational idiom which reflects the ongoing conflicts, fissures and tensions of society and if one judges by the evidence of Bollywood, then the verdict is clear: Cricket is now central to the idea of India and Indian-ness and this cricket is very different from the gentlemanly imperial sport that the British had in mind when they first introduced it into India.

India has appropriated and Indianised cricket. Lage Raho Munna Bhai is a hilarious film but this is why it also bats on the front-foot with respect to cricket.

A Job Half Done