A Lot To Worry About

One final fling at a medal is still left, and my fear is that if we get that, we might gloss over all that is wrong with this team. Believe me, there is a lot wrong there. 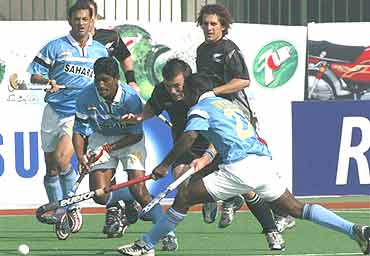 On the face of it, India seem to have done well to get into the play-off for the bronze medal in the Champions Trophy. But those who follow the game know and realize that Indian hockey is really in the doldrums right now.

If you ask me, India were lucky to finish fourth after the league matches. It was almost as if India were content with a draw for that they thought that was what they needed for a fourth place and the right to play for the bronze.

Spain beat Pakistan 3-0 to reach the final where they will meet defending champions Holland. Pakistan might be demoralized by this defeat, since they had set their hearts on winning the title, but now they may well go all out to seal at least a bronze, and that too against arch-rivals, India.

In my book, the 1-1 draw against New Zealand was a setback. As for the Kiwis, they would not be wrong in feeling that they may well have been denied a well-deserved win, as the Indians got a penalty stroke, which the New Zealanders were very unhappy about. Having said that, the Kiwis must learn to take that in their stride because umpiring decisions, however unpalatable, have to be accepted.

A slight error in their match against the Kiwis and it could have been a disaster. In fact, had it not been for the penalty stroke, which was contested by New Zealand, India may well have lost this match.

When the score was levelled, India went back on defence and were simply trying to keep the score thus. These are the kind of situations in which many teams, especially India, lose. That defensive approach can become a disaster. And we have suffered on account of this so many times in the past. The team management knows that, and should try to get the team to be more active in such circumstances.

The team seemed to have assumed that a draw was enough, because Germany was bound to lose by a big margin. It turned out that Germany won 4-3 and lost out only on goal average.

Both India and Germany scored nine each and India conceded 13 to Germany's 15. Sure, India had beaten Germany, but remember this German side has just two experienced players from Athens and is a totally new-look side.

For the third successive Champions Trophy, India will clash with Pakistan for the bronze medal. The last two times, India went down to their neighbours, even though in Amstelveen, India had a great win in the league.

Pakistan have definitely looked better than India, but it now remains to be seen whether the Indian players, as also the team management, can raise their level this time to give some hope for India in the coming months.

The Indian forwards have been found wanting in almost all the matches. Even in the win over Germany, the team was poor in front of the goal. Adam Sinclair has played well only in patches. That is okay if he is coming in as a substitute, which means the bench strength is fair. But as a mainline player, Sinclair and even Deepak Thakur have lacked scoring power.

Often when India scored, it was more on account of a blunder by the rival team and not because of any great move or combination.

Even in defence, Dilip Tirkey has not got the kind of support he needs. Also a weaker midfield has meant greater pressure on the overworked defence.

A lot of credit for the draw should go to Tirkey for his competent display once again. Sadly, he has not got much support.

Pakistan won the previous two outings in the bronze play-off, first at Cologne in 2002 and then at Amstelveen in 2003 and both were by identical margins of 4-3.

India's concern will be Adrian De Souza. There is a still a question mark whether the goalkeeper, who has had a good tournament, will be fit for the bronze clash. He injured himself while defending the first penalty corner and Devesh Chauhan stepped in and did an admirable job.

One final fling at a medal is still left, and my fear is that if we get that, we might simply gloss over all that is wrong with this team. And believe me, there is a lot wrong there.