A Legend By Any Definition 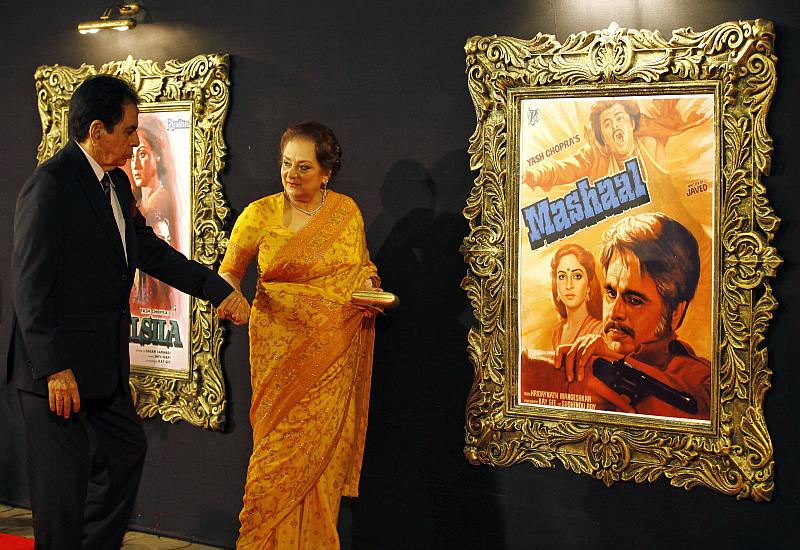 Born in Peshawar on December 11, 1922 Mohammad Yousuf Khan marks his 90th birthday today. To millions of his fans around the world, he is known as Dilip Kumar— the Last Emperor of Indian cinema as his biographer Sanjit Narwekar had put it. To us, the Peshawarites— or Pishoris as we like to call ourselves— he remains one of the four prodigious sons we gifted to the Bombay film industry— Prithviraj Kapoor, Ranbirraj "Raj" Kapoor aka RK Saab and Zakariya Khan ‘Jayant’, being the other three.

While my own heart remains firmly in the RK camp, I must concede that just like many parents are torn in their love for their children, the Pishoris too were split into two camps between Dilip Kumar and RK Saab. Talking to the old-timers in the walled city of Peshawar, where both the greats were born, it seems like the schism had to with the art rather than religion or ethnic origins of these giants. Like the moviegoers all over India divided into two camps over the question that RK Saab’s biographer Bunny Reuben raised in his very first article as a film-journalist—Who is the better actor in Andaz: Dilip or Raj?— Pishoris too took sides after this 1948 Mehboob Khan film. Though it hurts my pride as an RK fan it does seem that Dilip Kumar became the darling of the plurality if not the majority of Peshawarites. His hairstyle, sartorial preferences and mannerisms influenced at least two generations of common men and his mention still brings out a sparkle in the eyes of the grandmothers who saw his movies in his— and their— prime. 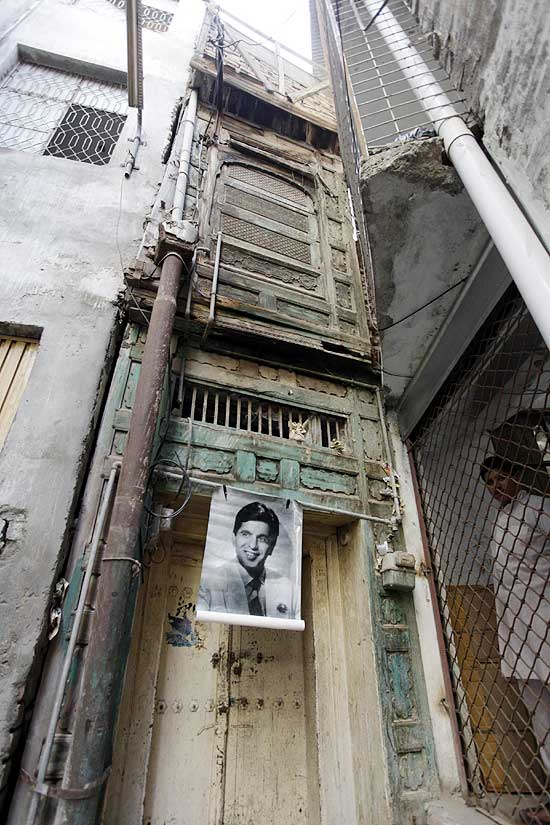 Dilip Kumar’s house in Doma Gali Around here, he played with swords on the streets
(Photograph by Mohammad Sajjad)

I have met octogenarians in Peshawar who till this day believe that in the Andaz scene where the RK character Rajan whacks Dilip Kumar’s character (incidentally named Dilip), RK did actually hit Yousuf Khan with the tennis racket! There was no point arguing as they— the Dilipiay or Dilipists as one Pishori RK aficionado would call the Dilip Kumar fans— were convinced. And perhaps Dilip Kumar does not know but in Peshawar his screen name is pronounced ‘Daleep’ with a thick Hindko accent. In fact, the phonetic spelling has made it to the invitation sent out by the veteran writer Younas Qayasi on behalf of the Cultural Heritage Council of the Khyber-Pukhtunkhwa to celebrate ‘Daleep’ Kumar’s 90th birthday in Peshawar.

Dilip Kumar was born to Lala Ghulam Sarwar Khan and Ayesha Begum in the Peshawar’s Mohallah Khudadad. The house is a five-minute walk away from Prithviraj-ji’s house where RK Saab was born. It is said that this family of fruit merchants moved to Bombay seeking medical care under the surgeon Dr. V. L. Parmar for Dilip Kumar’s elder brother Ayub Khan injured in a horse riding accident. The family’s business and personal travails ultimately led Yousaf Khan to step in to help his father. One such travel took him to Nainital where the movies production house Bombay Talkies owner, Devika Rani, accompanied by the master director Amiya Chakraborty, ran into the handsome Yousaf and, as Sanjit Narwekar says, “instinctively” asked him to come see her in Bombay. Ultimately, prodded by his mentor Dr. Masani, who also was friends with Devika Rani, Yousuf Khan — unlike his brother Nasir Khan, he had no desire or ambition to become a film actor — went to see her. Narwekar chronicles that the meeting lasted a mere four questions:

“Have you acted in films?

Do you speak Urdu?

Though ambivalent about the young man’s answers Devika Rani and her team screen-tested and then offered him a three-year contract at Rs.500 per month. Devika Rani considered Yousuf Khan too bland a name and commissioned the writer Pandit Narendra Sharma to rechristen him. Jehangir, Vasudev and Dilip Kumar, were the three choices placed before Devika Rani and Yousuf Khan. Yousuf Khan, prompted by Devika Rani, chose Dilip Kumar over his preferred Jehangir. Contrary to the assumption that the screen name was adopted to hide his Muslim origins, it was very much a business decision by Devika Rani who sought to replace the great Ashok Kumar, who too sought to leave Bombay Talkies. Four questions ultimately gave rise to a career spanning over five decades and 57 movies.

The range of characters performed by Dilip Kumar from being the benchmark deep-in-the-cups melancholic in Devdas to the ebullient Jai of Aan and from the revolutionary in Sagina Mahato or Nehruvian socialist in Leader to the underworld don in Vidhata, displayed a breadth mastered by few other actors. The on-screen chemistry with his leading ladies produced sophisticated sensuousness, the pinnacle of which was on display with Madhubala in the Mughal-e-Azam love scene acted out to the semi-classical Prem Jogan Ban ke by Ustad Bade Ghulam Ali Khan. While Muhammad Rafi did most numbers as Dilip Kumar’s playback voice including the awesome madhbun mein radhika nache re for which Dilip Kumar learnt to play the sarod for a year, Talat Mahmud’s voice brought out the ultimate romantic in him as in Taranaor Sangdiland was his perfect match. Dilip Kumar even sang for himself in Musafir. Whether it was Mukesh’s four super-hit playbacks for him in Andaz or movies like Amar or Mughal-e-Azam in which he had no songs, Dilip Kumar conducted himself with a calibrated poise that is perhaps his artistic legacy. According to Lord Meghnad Desai, Dilip Kumar took the cinematographer/director Nitin Bose’s tip that “in a talkie, it is the silences that are the most dramatic”. No doubt then that unlike others, Dilip Kumar’s measured pauses and reticence is as much his signature as his crisp dialogue delivery.

It is not for me, who only saw Dilip Kumar closely on his first visit to Peshawar and on a screen 32 times smaller than his original work, to comment on this ‘colossus of the Indian cinema’. But I would be remiss not to reiterate the great Amitabh Bachchan’s words that “whenever the history of the Indian cinema is written there will always have a ‘before Dilip Kumar and after Dilip Kumar’ almost like a yardstick”. He has been called a thespian, the Tragedy King, and of course a humanist par excellence. But as Lord Meghnad Desai notes in matchless work Nehru’s Hero: Dilip Kumar in the Life of India, Dilip Kumar reflected the best of his country at the best of its times … he is a legend by any definition.

All I have to say to Dilip Kumar who till this day speaks chaste Pishori Hindko is: Lalay, salgirah mubarakh howay nain … many happy returns of the day.

Dr Mohammad Taqi  is a regular columnist for the Daily Times, Pakistan where this article also appears. He can be reached at mazdaki@me.com and tweets @mazdaki