'A Great Disservice To Muslims' 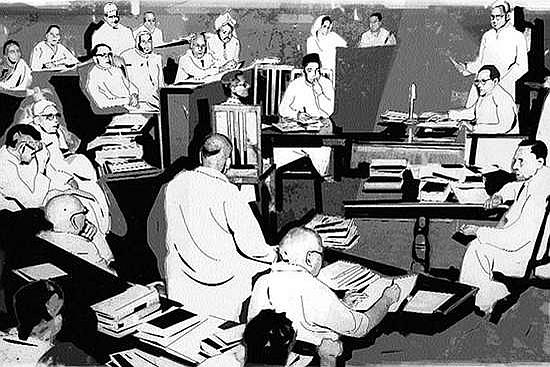 Article 44 of the Indian Constitution states:

"The state shall endeavour to secure for the citizens a uniform civil code throughout the territory of India ".

No doubt Article 44 is in the Directive Principles, and not the Fundamental Rights of our Constitution, but Article 37 states :

"The provisions contained in this Part shall not be enforceable in any court, but the principles therein laid down are nevertheless fundamental in the governance of the country and it shall be the duty of the State to apply these principles in making laws "

The Constitution was made in 1950, and 64 years have passed since it was promulgated, but Article 44 has till now been totally ignored, obviously for vote bank politics.

I have been raising my voice consistently whenever there was any atrocity on, or oppression of, Muslims, but on the issue of a uniform civil code I have firm views.

In fact one of the reasons for Muslims in India remaining backward is that there was no modernization of their personal law.

In all modern countries there is usually one common law for everybody. In fact in India there is one common criminal law (I.P.C. and Cr.P.C.) for everybody, and the land laws (e.g. the U.P. Zamindari Abolition Act, 1951) for everyone. Nobody objected to that, though many of these laws are against the Muslim law. For instance, Muslim law provides for stoning to death for women committing adultery, but that would be illegal under the I.P.C.

The injustice in Muslim Law can be seen in the fact that a Muslim husband can divorce his wife by simply saying 'talaq, talaq, tqlaq', without ascribing any reason, whereas a Muslim wife cannot do so. She has to file a petition in court, which usually takes years to decide, and she must make out a ground (e.g. cruelty, adultery, etc). In all modern countries there is usually one common law for everybody.

Thus there is discrimination against the wife in two ways:

I know of a case where a Muslim girl was married to a Muslim young man who had come from England to marry her. It was an arranged marriage. After the wedding in India the young man went back to England alone, saying that he will arrange for his wife to come to England, but instead of doing so he sent a letter of talaq within a month. The girl almost committed suicide.

I may give another illustration of the backwardness of some of the Muslim laws. When I was a Judge in the Supreme Court a case came before my bench from Orissa. In some village in Orissa there was a young Muslim couple with three children. One night under the influence of liquor the husband had a quarrel with his wife and said to her 'talaq, talaq, talaq'. Nobody else was present at that time, and nobody came to know of it. However, about a month thereafter the wife was indiscreet, and told a friend of hers about this, and this friend told someone else, and so on, until the Maulana of the local mosque came to know of it. He then declared that the couple were no longer husband and wife, and so could not be allowed to live together. At this a mob of local Muslims reached the couple's house and told the wife to get out of her husband's house as she was no longer his wife. She protested that she had three small children, but the mob would not relent. A petition was filed before the Orissa High Court, which was dismissed, and against that order an appeal came before my bench in the Supreme Court.

I observed in court that everyone in this country has to behave in a civilized manner, whether Hindu or Muslim. If the couple wants to live together, how is it anyone's business? I then directed the police to give protection to the couple.

A Muslim man can marry four wives, but a woman can, at a time, have only one husband. Now monogamy represents equality between man and woman, and this is the age of equality. So why should polygamy be permitted to Muslim males? It may be mentioned that up to 1955 a Hindu male could have unlimited number of wives, whereas a woman could have only one husband. This law was altered by the Hindu Marriage Act, 1955, which provides for monogamy.

It can be seen that much of the Muslim personal law is totally outdated and inhuman, but it is not allowed to be changed due to vote bank politics.

I submit that those who have not allowed changes in the Muslim personal law have done a great disservice to Muslims. Retaining the outdated personal law has contributed to keeping Muslims backward.

Law has to change with changes in society. To insist that laws made 1500 years ago must continue in the 21st century is totally stupid and unrealistic.

Before ending I wish to say that I know that some Muslims may oppose my views, but that is wholly irrelevant fore me. I have always supported Muslims whenever I thought that injustice was being done to them, and my track record can be seen in this connection. In my opinion great injustice has been done to Muslims by not modernizing their personal law.

Among the comments to my previous post (regarding uniform civil code) was a comment that if the Muslim Law was amended by Parliament it will violate the fundamental right of Muslims to practice their religion.

To my mind this is a specious argument. The Hindu Law was drastically amended by Parliament in 1955 and 1956, but that did not violate the right of Hindus to practice their religion. Moreover much of Muslim law has already been amended and a uniform law made for all. For instance, the Muslim criminal law has been replaced by the Indian Penal Code and Criminal Procedure Code a hundred years ago. Now people cannot stone a person to death for adultery, as was permitted by Muslim law. In fact it will amount to murder under section 302 I.P.C. By abolishing the Muslim Criminal law have the Muslims in India been deprived of their right to practice their religion ? The land laws in rural India are also common to both Hindus and Muslims, e.g. the U.P.Zamindari Abolition Act, 1951, and to that extent the Muslim law has been abolished. Has that denied to the Muslims the right to practice their religion ?

Similarly, if there is a common civil code Muslims will not in any way be denied the right to practice their religion.

Law reflects social relations in a society at a particular stage of its historical development. Muslim law, like the old (non statutory) Hindu law, was a law made in the middle ages in feudal society. Obviously that law is outdated in modern society. For instance, in feudal society, women were regarded as inferior to men. Hence the law discriminated against them. Thus, while a Muslim male can marry four wives, a Muslim female can marry only one husband. A Muslim husband can divorce his wife without going to court and without giving any reason , but a Muslim wife who wants a divorce has to file a petition in Court, and plead and prove one of the grounds mentioned in section 2 of the Dissolution of Muslim Marriages Act, 1939, That petition may take years to decide. A Muslim daughter gets only half what the son inherits. Many more examples of discrimination against women in Muslim Law can be given.

The modern age is the age of equality. Monogamy represents equality between men and women. The Muslim law, being a law of medieval society, is totally outdated in the modern age, and needs to be drastically amended.

In all modern countries there is one law for all communities. The Muslim law was not allowed to be amended by certain bigoted people and for vote bank politics, and this refusal to modernize Muslim law or enact a common civil code has contributed to keeping Muslims backward in our country, and has thus done great harm to Muslims.

While Justice Katju has reduced the entire debate only to the lack of reform in Muslim Personal Law, for a more detailed discussion, please visit the Outlook archives