No theatrics, no showmanship, just another servant of Indian cricket quietly putting his tools back in place, wiping the workbench clean and turning out the lights as he quietly bids farewell to us 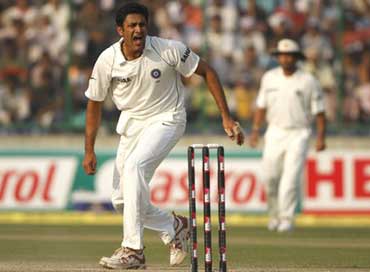 Woke up early on a grey Sunday morning, ostensibly to catch the dying moments of an already dead Test match, debating whether or not the effort would be worth it.

Found out Anil Kumble was quitting.

Had to watch his last bowling effort. Thank god for live streaming cricket.

It wasn’t much. Four overs, sprinkled with long hops, the odd shooter, but mostly consistent stuff. It didn’t really matter of course.

It was just India’s greatest ever spinner going out on his terms.

A bandaged broken left hand, a dodgy shoulder, years and years of forgotten, and sometimes unrewarded toil. So many overs, on so many unforgiving pitches, relentless accuracy, relentless focus, and now it all ends.

Not with a bang, but with a graceful bow.

No theatrics, no showmanship, just another servant of Indian cricket quietly putting his tools back in place, wiping the workbench clean and turning out the lights as he quietly bids farewell to us.

One last spell on his favourite ground, in front of his adoring fans. His home away from home.

We wrote him off, again and again. He doesn’t spin the ball. They’ll play him like a medium pacer. He can’t take wickets on good tracks. His shoulder is dodgy. He is too old. Yet, he came back, again and again, in his own quiet way.

No bursts of anger. No angry ripostes to his detractors. A quiet word, an expression of pain at the lack of faith in him, followed by a promise to keep working. And another five wicket haul would see India winning again. And we would praise the batsmen.

Again and again, he would walk back to his run up. A quick jog to the crease, the high arm action, the ball clutched in his gigantic palm, wrists cocked and ready to release a sarpaastra that would bite the surface and hiss at the batsman before inevitably crashing into the stumps or into the pads.

We won’t see that again. The IPL notwithstanding.

Despite his considerable one-day achievements, Test cricket was Kumble’s forte. Pressure applied from one end. Hour after hour. An unerring length maintained over after over. No complaints about the state of the pitch, no excuses when fielders dropped catches and ‘keepers missed stumpings. He just did what he had to do.

Broken jaw or no broken jaw.

Whether or not young cricketers aspire to play cricket like him, we can only hope that in the future, young Indians aspire to be like him.

And for being that source of inspiration, Anil-anna, you deserve our heartfelt gratitude.