A Government In Hiding

Who were the people who suddenly materialized and took over the anti-rape protest in exactly the way that the police wanted them to, giving them the much needed alibi for a crackdown? 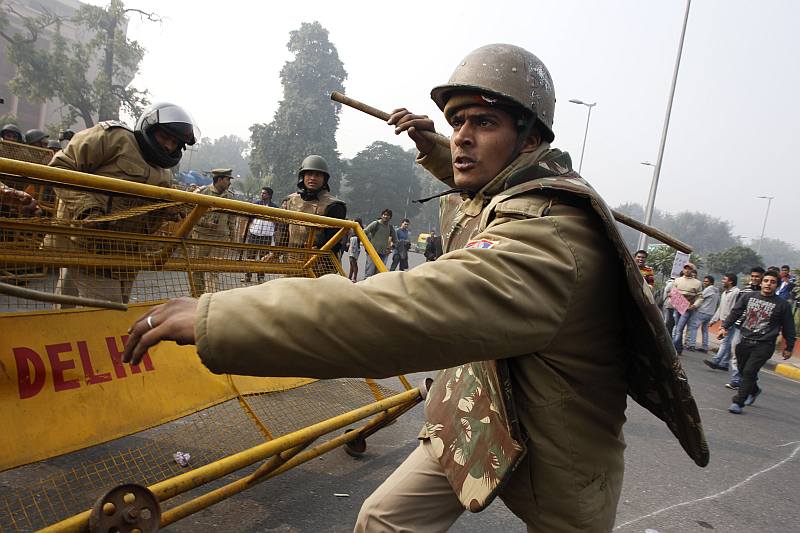 Protesters from Raisina Hill began to be forcibly removed late last night. The police action continued in the foggy cold of this December morning. Aghast at the violence on a completely peaceful gathering of students – some of them just school children – many of us too felt compelled to join the demonstrations. A number of left-wing student groups who have been part of the protests had called for collecting at the Neel Gumbaz at Nizamuddin. At 11 am, we all started collecting there – many of us older folk going there in solidarity with what has been one of the most unprecedented student-youth mobilizations in the city. Yesterday, there had been repeated rounds of  water cannons, tear-gas and brutal lathi-charge by the police of a government that has gone into hiding.

Finally, some 600-700 of us began moving in a procession from Nizamuddin to India Gate. When we reached there, we discovered that already large numbers of people had begun recongregating at ‘Rajpath’ – the Power Avenue where every January the Republic displays its military might to the world. The numbers were continuously swelling. A group of supporters of Arvind Kejriwal’s AAP – inclduing Kejriwal and other leaders – were squatting on one side, towards Hyderabad House. This was virtually on the margins of the area where the main crowds were. Apart from the group of people we had come with, there were hundreds who seemed to us to be completely unaffiliated ordinary students, contrary to some claims floating around in Facebook that these were ‘RSS crowds’. At one end a human chain had been erected and slogan shouting for justice continued. Around the Amar Jawan Jyoti, there were processions of students still coming in. We were there till about 2 pm and there was no question of any violence at all – except for three unprovoked tear gas shells that had been lobbed by the police into the crowd. There had been some minor commotion as the police occasionally tried to push back students with a lathi charge of sorts.

By this time, however, it was apparent that the police was preparing for the offensive. Police briefings were taking place in different groups and gradually the crowd was being surrounded from all sides. And yet, till about 2.50 pm, despite twenty rounds of tear gas being fired by the police, as well as periodic lathi charges  - they did not manage to provoke violence from the crowd to justify a crackdown. But the crackdown had to take place. And lo and behold, the justifications for it materialized, suspiciously, very soon. Bonojit Hussain sent this update after the round of violent eviction of the protestors:

Just back from India Gate. Police crackdown through out the day was severe with endless rounds of tear gas shelling, baton and water canon charges. But what was more disturbing was that as the day progressed, the protest was taken over by mob. It was height of lumpenism; several women protesters were molested; sexist slogans overtook slogans for gender justice; watch towers were put on fire and vehicles overturned. It can be summed by an oxymoron – “Machismo and Testosterone against Rape”. 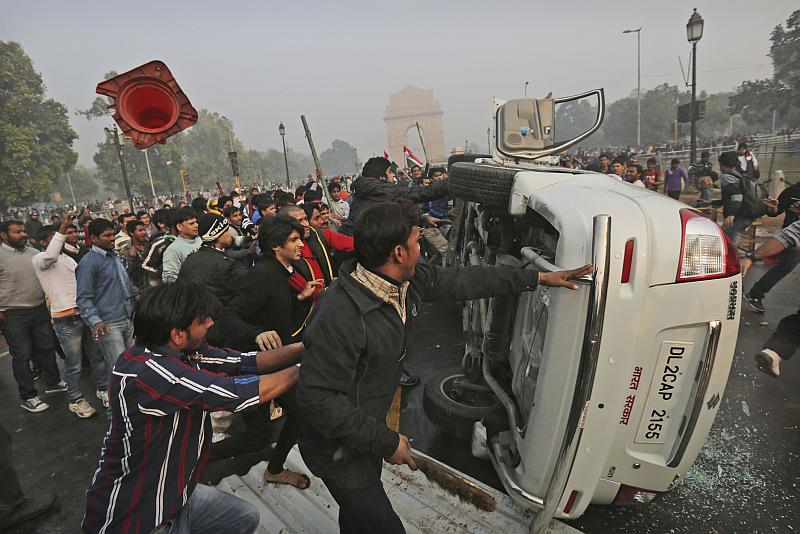 So, who were these people who suddenly materialized and took over the protest area in exactly the way that the police wanted them to? Who were these people who gave the police the much needed alibi alongside their display of sexist machismo? It is highly unlikely that they were ‘protestors’. There is only one word for such elements who surface repeatedly in the history of mass movements: agent provocateurs. Some people seem to have identified them as NSUI elements. Perhaps there were some others too like ABVP, but it seems most likely that they were the stormtroopers of the Congress party.

When we got back home, most reports on television too underlined the fact that there had been a violent police attack on utterly peaceful protestors. Of all the footage that I could see, I did not see a single one where the ‘lumpens’ were being beaten and attacked. They had done their work and conveniently moved to a safe distance from where they continued to pelt stones but the police made no attempt to get them. Apart from the pro-Congress NDTV and the somewhat chastised CNN-IBN, most of the others clearly showed that the police violence was entirely one-sided.

One more thing needs to be stated clearly, especially for the benefit of those misled by the die-hard left-wing and other assorted cynics. Yes there were slogans about ‘death penalty’ and ‘castration’ but there were as many slogans that asserted different viewpoints – ‘Take Back the Night’, ‘Don’t teach your daughter not to go out; Teach  your son to behave properly’; ‘Mere skirt se oonchi meri awaz hai’.  And not all those who raise demands for ‘death penalty’ are incorrigible rightists – these are just young people spontaneously expressing their anger. So, for instance, when one of us got into a conversation with a group of students who were raising this slogan and explained why feminists have a problem with such a demand, they listened attentively. Not only did they listen; they were actually open to seeing the other point of view. [In any case, we might do well to remember that the question of capital punishment is not a settled issue among 'Leftists' either - many of whom pass off summary executions in China in complete silence!].

Finally, a small point about the demands of the movement. Unfortunately, our imagination still does not go beyond demanding new laws. That is our most common and unthought response to any crisis. And that is why the Home Minister could take us for a ride by promising a stringent law that would provide for death penalty in “the rarest of rare rape cases” – whatever that means. The fact that there are no convictions in rape cases has nothing to do with lack of stringency of the law. It has everything to do with rampant patriarchal values in the very processes of the law, where every rape trial becomes a farcical replay of the rape, as if it is the raped woman who is on trial.

But most importantly, low conviction rate in rape cases has everything to do with the police. First, it has to do with the fact that the police refuses to even register FIRs in a majority of rape cases. The woman who goes to a police station to register an FIR is most likely to face more humiliation there.  More stringent laws will only give more powers to an already corrupt and brutal police force to harass ordinary people, frame innocents and let the culprits go scot free.

Perhaps this is the time to look beyond mere demand for new laws and to focus on the decrepit and corrupt entity that the police force is. It is the police that should be the target of our exertions right now. The Police force in Delhi – as indeed in the rest of the country – needs to be thoroughly revamped in terms of training, accountability and gender sensitivity.

Aditya Nigam is a Senior Fellow at the Centre for the Study of Developing Societies. First published in Kafila