International A Glass Half Empty

A Glass Half Empty

The US may soon find out that making a scapegoat of Nancy Powell only solves half its problem relating to India. The other half may well prove to be much tougher to resolve in the coming days. 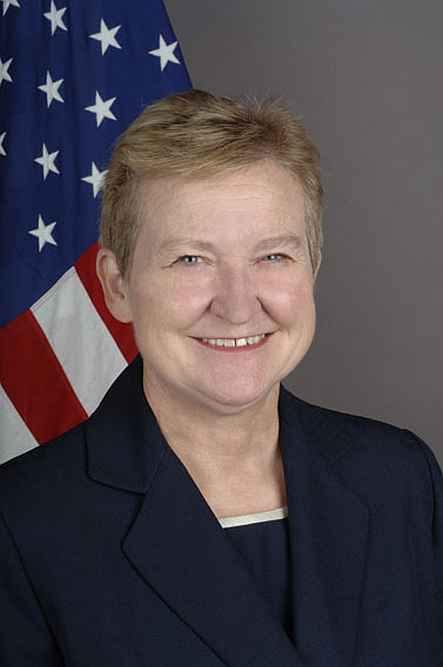 Pinning the blame on a career diplomat, especially one on the verge of retirement, often is the best option for a government when one of its foreign policy decisions goes wrong. US ambassador to India, Nancy Powell, fits this bill perfectly. After serving in her post for over two years, Powell has decided to put in her papers and seek early retirement. What was being speculated for the past several weeks was confirmed on Monday when the US embassy in Delhi issued a statement confirming Powell’s decision to retire. But this has only led to further speculation in the media and the diplomatic circle in Delhi.

There have been a string of US ambassadors in recent past who have left before completing their three-year tenure in Delhi. Robert Blackwell, touted as the one who helped in strengthening Indo-US ties under George W. Bush’s Presidency, left before he completed three years. Though there were no controversies relating to his departure, Powell’s immediate predecessor, Timothy Roemer, had left in a huff in 2011 after the US failed to win a lucrative defence contract in India. Therefore, US envoys leaving their post in India before completing their tenure are not unprecedented.

But Powell leaves at a time when the Indo-US relations, that have been under some strain over the Devyani Khobragade controversy, seem to have waned to a certain extent. Her departure—which now seems to be likely around June—will be at a time when the parliamentary elections in India are over and a new government is in place.

The attempt on the US side seems to be to start with a clean slate with the new government in Delhi. But in the process it appears to have found Powell as the most convenient scapegoat. However, it is not clear if her fading away from the diplomatic scene would immediately lead to renewed bonhomie in Indo-US bilateral ties.

Soon after her arrival in Delhi to take up the post as America’s ambassador to India, Powell has made it clear that “US’ business in India is business.” But if that seemed to be the main focus to describe the relationship, then surely there was not much progress. Though, for that, neither Powell nor the Indian leadership could be entirely blamed. The timing of her tenure in Delhi unfortunately coincided with impact of the global economic crisis on India. If the business side of the relationship did not move forward, as was hoped by the business community in the two countries, then it had a lot to do with investors being cautious in making fresh investments in the wake of the slowdown of the global economy.

It could be argued that it was not only the Indian economy that tapered off coming down from a nine+ growth to five or thereabouts during this period but also that of the other fastest growing economies around the world. Looking at the members of the BRICS, one could see that China too was affected by the slowdown as its 10 per cent plus growth came down to 7.5 per cent, while that of the others like Brazil, Russia and South Africa went down even below that of India’s.

In addition, the Pharma lobby in the US and American companies intending to invest in the Indian nuclear sector were put off by some of the policies that the Indian government had adopted.

Moving beyond business, if one was to look at other areas in the bilateral relations between India and the US, then the Devyani Khobragade issue was definitely one that became a major stumbling block for meaningful progress in their ties. And for this, the US government and the ministry of external affairs of India should both be blamed. If the US “mishandled” the Indian diplomat and treated her like a “common criminal,” then the jingoistic reaction in India contributed to its snowballing into a major controversy. While the American government was being blamed for the humiliation of the Indian diplomat, the fact that she had also violated a domestic law in the US was totally ignored and brushed off the Indian table.

If, in this drama, Powell is to be blamed then it is perhaps for the decision of one of the US diplomats in the consular section to give a visa to the Indian maid Sangeeta Richard’s husband and children to travel to the US even as a case against her was pending before the Indian court. The US diplomat involved in the consular section was since withdrawn and taken back to Washington. But some of the Indian decisions that include stripping US diplomats of special privileges and removing the barricades from in front of the embassy in Chanakyapuri, remain in force.

The third reason being cited for Powell’s removal from the post is because of her handling of Gujarat chief minister and BJP’s prime ministerial candidate, Narendra Modi. The US continued to be the last “holdout” among western diplomats to engage with Modi. Even though the European Union ambassadors broke their post-Godhra moratorium of engaging with Modi, the US embassy in Delhi only decided to do so early this year after all the others.

However, this was a decision taken by the US much before Powell arrived on the scene and the ambiguity on granting a US visa to the Gujarat chief minister was maintained for long by successive American ambassadors and regimes.

There is no doubt that to have a normal and improved relations with India, the US will have to find a way out for both issues, the one relating to Modi’s visa as well as the one involving Debyani Khobragade. A new face in the US embassy in Delhi will allow Washington to revive its Indian engagement with added verve and vigour. However, it is unlikely to be smooth sailing on either of the two cases. Any hint of a compromise on Debyani issue by the new Indian government will come up for strict scrutiny from those in the opposition. On the visa issue, resistance may come from the anti-Modi brigade in the US.

By all indication, Nancy Powell’s departure from the scene may allow the US to re-set its relations with India. But it may soon find out that making a scapegoat of Powell only solves half its problem relating to India. The other half may well prove to be much tougher to resolve in the coming days.