'A Giant In His Own Right'

'One of the coolest characters the game has seen. If Sachin was to walk off the field today, without ever lifting a bat again, he would still be one of the icons, a true legend. Let's not confuse things by comparing him with Viv or anyone else.' 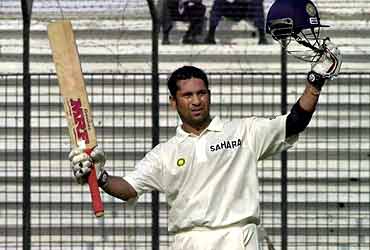 Tendulkar is my favourite overseas player. For patriotic reasons, Brian Lara is the best Caribbean represents for me. They are different people and none the less because of the different cultures they come from. Lara, because he is a left-hander is flashy and elegant. There is a certain panache about his batting, his bat comes down on the ball with a high back lift.

Tendulkar stands still at the crease but loves to attack and is very positive. He could have scored more runs but then he is no Geoff Boycott. As a person, Tendulkar has invited less controversy than Brian. On a different note, I can't help commenting that when it comes to style, I find Rahul Dravid most stylish. In boxing parlance, he gets his punches without anyone noticing it. At the end of it, his opponent is bruised!

I didn't change my style but then Tendulkar is finding his own challenge in a different way. It doesn't make him any less passionate. He has wonderful love for the game. I lasted up to 38 and could have gone on and tried to accomplish a few more things. Under Dennis Waight the fitness levels we had could have matched any of today's top teams.

When I left, my mind was willing but wear and tear and ageing had begun to show up at the door. Thank God I never really was seriously injured. I kept working hard, trying to be super fit, a healthy athlete.

I wore my heart on the sleeve and showed more emotion on the field. Tendulkar never contests a decision. But then everyone is different. His affair with the game has lasted long. It can continue for at least four more years. He must have set himself targets which he could achieve.

I have always called him Kid. I first heard of him through Ian Bishop. Touring Indians in England in late 80s were playing against Derbyshire in a first class fixture and he smacked Bishop back over his head for a six. Now Bishop was definitely one of the meanest. He tried to be aggressive to the young man and the little man dispatched him. I remember Bishop telling me with a certain urgency in his voice: The little guy is dangerous. Now Bishop wasn't the one to praise a batsman easily. I said who he was talking about. Why did he say so. His talk had the feeling about somebody who would become an icon in the years to come. Tendulkar, as we know, has turned out to be of some rare value.

I have met him a few times, with his wife and kid around in England, shared a flight with him and his family. We have discussed cricket at times.

I remember my chat with him in Antigua. Indians were touring the West Indies in 2002 and he was struggling for runs.

I went to the dressing room and he was very accommodating. I said to him: Sometimes negative thoughts could occupy the mind. There are times when because of the attacking style of ours we could do something silly, hit in the air, make a wrong judgment. We hear a lot of boo-boos from critics. But that is our style. We could have hiccups, bad times. But when on song, it is a sheer pleasure for people. It removes boo-boos. More often than not he would succeed. He just needed to be resilient.

Resilient he sure has been. In Sydney he made 241 after a poor decision he received in a previous Test. But he didn't let it get to him. It was typical of him. If you could score against Australia, against any opposition on any surface, you are all right.

This kid has been brought up on pressure. Ever since he was young, he shouldered responsibility. When he was captain, I always thought a big burden had been placed on somebody so young. Something we all ignore is the commercial pressure he works under. It's a huge factor, an obstacle. There is an impossible demand on your time and attention from sponsors. There must be so much running on the young man's mind. Tendulkar, through his passion, has shown that cricket remains his priority.

I've always looked at him as somebody who loves the game. That's why he is successful. He is level-headed and his interviews show it. He is well-respected, and let's speak in this way, an icon. One of the coolest characters the game has seen. If he was to walk off the field today, without ever lifting a bat again, he would still be one of the icons, a true legend. Let's not confuse things by comparing him with Viv or anyone else. He is a giant in his own right.