'A Fight To The Finish'

'It reminds us of the Jallianwala Bagh massacre,' says the retired army officer leading the agitation by the Gujjars, insisting that his community is geared for a fight-to-the-finish over the issue of inclusion in the Scheduled Tribe list. 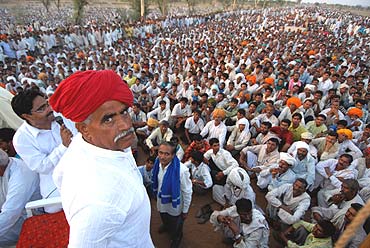 The ongoing agitation demanding reservations under the Schedule Tribe category for the Gujjars is not being led by a politician but by a retired army officer. Talking to Outlook Sapthahik on phone when he was leading a blockade at the Jaipur-Agra national highway along with some 30- 40 thousand agitators, Col (retd) Kirori Singh Bhainsla, the convener of the Gujjar Sangharsh Samiti, said his community is geared for a fight-to-the-finish over the issue. Excerpts from the interview:

For how long do you plan to sit on this blockade?

Till the government accepts our demands, the Gujjar community will continue to sit on blockade like this. The government should compensate the victims of police firing. At least one dependent per family should be offered a government job. The state government must send a formal recommendation to the centre that Gujjars should be included in the Schedule Tribe (ST) category. Only then is it possible to consider withdrawing this agitation.

But the state government says that it is the centre's responsibility to provide reservations and it is in the process of making a formal request...

They must make the recommendation first. If they want, the state government can make provisions to include Gujjars in the Schedule Tribe category at the state level itself. Karnataka and Andhra Pradesh have done this before.

Gujjars are already a beneficiary of reservations meant for the OBCs. So how fair is your demand to include them in the Schedule Tribe category? Will it not harm the interests of other tribes like the Meenas?

The Gujjars of Rajasthan are extremely backward in both social and economic terms. The Meenas have 225 IAS and IPS officers from their community while there is only one Gujjar IAS officer in the entire state. Nobody's interest would be harmed if we are recognised as a Scheduled Tribe.

It is being said that you are trying to gain political mileage from the issue and that you are close to the Bahujan Samaj Party...

I am neither affiliated to any political party nor do I have any wish to enter active politics. I am only serving my community.

Home minister Gulab Chand Kataria has stated that it was the Gujjars who first attacked the policemen and brutally mutilated the limbs of few of them.

The home minister is lying. The fact is that police fired at people and didn't even spare women and children. It reminds us of the Jallianwala Bagh massacre.

Resign Or Be Dismissed