'I think it's an advantage because if the new ball is seen off, one can score big runs. I am looking forward to the challenge,' says the dashing southpaw on being declared the first choice opener for Tests by the skipper 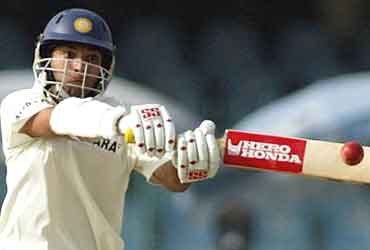 With skipper Saurav Ganguly declaring him as the first choice opener for Test matches, Yuvraj Singh said he would prepare for the new role with a changed mindset and use the opportunity to score big knocks.

"It's going to be a change in the batting order, and I have to go up the order. I am going to prepare for it, I will practice with the new ball. It's a different challenge," he told reporters on the sidelines of the camp for Asia Cup probables in Bangalore.

"I think it's an advantage because if one sees through the new ball, one can also score big runs. So, I am looking forward to the challenge," said the left hander who has played four Tests so far.

Strongly backing him for the opener's role, Ganguly had said Yuvraj was a class act, had the ability and mindset to open and should not be kept out of the team.

Asked if he would be changing his batting style for his new role, Yuvraj said, "It's not going to be much of a change of style. It's just to see off the new ball and (then) play your shots. I think it's the change of mindset (that's needed)."

Yuvraj also said he would try to follow in the footsteps of Virender Sehwag, who was also promoted from the middle-order to the opener's spot.

"He (Sehwag) has set a very good example. He has done tremendously in the opener's slot. So, if I can do the same and be as successful as Sehwag, it would be good for the team," he said.

Asked if he will return to the middle order if he did not succeed in the new role, Yuvraj said "When you play cricket at the international level, you don't think about ifs and don'ts. Whatever the situation, you have to go through it, and be positive about it."

Yuvraj paid credit to senior players for the success of youngsters like him, Sehwag, Harbhajan Singh, Ashish Nehra and Zaheer Khan, and said they took away the pressure from them.

"They make us feel very good, and they don't put much of pressure on us. We gel together very nicely," he said.

Yuvraj said he was not sure which of the home series -- against Australia or South Africa -- would be tougher, as now his focus was only on the Asia Cup in Sri Lanka next month.

'Yuvi To Open In Tests'