Now that Pakistan have squared the series by winning the Bangalore Test, it may be tempting to predict that they have an upper hand in the six-match one day series that kicks off on April 2 at Kochi. Do they? 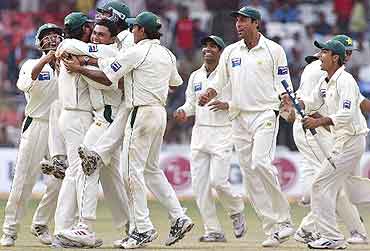 As a team, Pakistan have made tremendous progress in this Test series. The momentum, too, favours them. They have beaten India in all of their last four one-day encounters. And now, with the win in Bangalore, they have ended the Test series – although a 1-1 draw – on a high.

Momentum however is a highly overrated factor. (As is most rationale when applied to one-day cricket.) England, on their last tour to South Africa, won the Test series but were blown away in the one-dayers in spite of the heroics of Kevin Pietersen. India, on their last tour to Australia, proved to be a better Test team than Australia but crumbled in the ensuing VB series.

However, it is impossible to dismiss the very tangible gains Pakistan have made. Younis Khan, who looked a total liability till Mohali, has emerged as one of the pillars. Mohammad Sami’s performance has been a lesson – one that a certain fast bowler from Rawalpindi will do well to imbibe and recite every day – in how to bowl long spells with sustained intensity and incisiveness.

Danish Kaneria’s bowling videos may join the private collection of a leg spinner from Australia who, more than once, has bitten the dust on Indian pitches. Shahid Afridi, finally enjoying the backing of the coach and captain to play as he wants to – so far, he has done just that but without the team management’s approval – may get to be spoken of in the same breath as Adam Gilchrist and Virender Sehwag if he can sustain the momentum.

Above all, this Test series has marked the transformation of Inzamam-ul Haq, always a great batsman, into an effective leader. (Why, he even made a full-length dive on the fifth day in Bangalore.) Given the way he has marshalled his meagre resources, this series has elevated Inzamam, the skipper, several notches.

However, two very different teams will be playing the one-day series.

Pakistan ‘bolstered’ (if we can call it that) by the inclusion of Shahid Nazir, Iftikhar Anjum and Mohammad Hafeez. Nazir, when he was first seen on the international stage in 1996-97, looked like the future of fast bowling along with Mohammad Zahid, who had been rated by Brian Lara as the fastest bowler he had ever faced. Not much of either was seen in the years that followed. Iftikhar and Hafeez are largely unknown quantities.

Besides, some gains of the Test series will count for little in the one-dayers. Sami, reined in by the restrictions on short-pitched bowling, will not be as effective as he was ever since he began to employ the short ball in the second innings in Kolkata. Kaneria’s economy rate in Tests, if carried over the one-dayers, will prove disastrous.

The Indian team, once Yuvraj Singh, Mohammad Kaif and M.S. Dhoni join the playing eleven (Murali Kartik and Dinesh Mongia, though selected, may adorn the bench), will bear a very different look and spirit. Sachin Tendulkar, most likely, will be back to being a destructive batsman in the one-day format.

And Zaheer Khan and Irfan Pathan can be very effective in the opening as well as slog overs. Most importantly, Saurav Ganguly is still one of the best one-day batsmen in the world, which means India will take the field with eleven players and not just 10 players and a captain.