Does the contemporary environment give India the opportunity to position itself as an area of agreement between US and Russia? 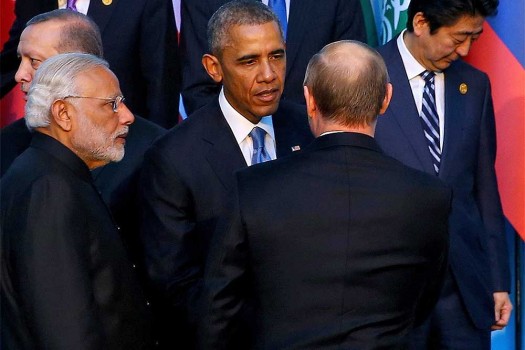 A November 1964 exchange between US diplomat Chester Bowles and India's then Ambassador to Moscow T.N. Kaul offers a fascinating insight into the contemporary dilemma regarding a sustainable approach to the great powers.

While discussing South East Asia, Bowles had remarked, "it would be a good thing if India could try to bring the Soviet and American points of view closer…India's friendship with both could act as a sort of bridge between them." Bowles "hoped that it would be possible for USA and USSR, with the help of India, to come to some kind of understanding about preventing Chinese expansionism and infiltration in South East Asia." Kaul had responded that, "India would be glad to bring the US and Soviet points of view closer as far as lay within our ability. In fact this was our present policy."

Kaul's response reflected India's then geo-strategy to position itself as an area of agreement between the US and Soviets. As his September 1965 cable to Indira Gandhi subsequently explained: "The interests of America, USSR and India, have a common feature of being aimed at the prevention of Chinese expansion in this area. This provides an opportunity for India to reap the maximum possible advantage from both sides and strengthen herself for the future."

Does the contemporary environment enable a similar opportunity to again position India as an area of agreement between Washington and Moscow? To evaluate such a balance-of-power approach we need to examine the inner workings of the US-Russia-China triangle, which defines the great power setting for Delhi. There are three dynamics that must inform an Indian policy-strategy towards the global triangle.

The first dynamic is US global geostrategy with the Pacific "pivot" as a sub-component of US foreign policy. The escalating US-Russia Cold War and proxy military conflicts have ironically placed the parallel Sino-American antagonism in East Asia as a sub-plot in America's global chessboard, despite the US "pivot" to the east.

On the sidelines of a recent seminar on China in Delhi, an American interlocutor privately remarked that from Washington's perspective, Russia is a bigger challenge for US strategists than China. The reasoning: China was merely making "claims"; Russia was actually rolling back US influence.

This belief is also reflected in mainstream American political discourse where Russia rather than China has dominated the recent conversation on international security. For Delhi, this has been disconcerting, and is challenging Indian policy assumptions, which were based on the premise of an undistracted American "rebalance" towards the east.

The second dynamic in the global triangle is the continuity and change in the Sino-American relationship. Economic interdependence, which had muted their security dilemma, has been displaced by a more overt rivalry and tensions, particularly on China's maritime periphery. Yet, just as the last decade had exaggerated the promise of US-China relations, the contemporary discourse exaggerates enmity.

Both sides still recognise that accumulated economic linkages in each other's economies shape their strategic choices. The 2015 figure of $659 billion in two-way US-China trade in goods and services is hardly a trivial figure. Perhaps, even more interesting is the tacit and active cooperation between China's new economic institutions and plans with the existing Bretton Woods order.

As one American official recently remarked, "better infrastructure" through China's One Belt, One Road (OBOR) "will increase trade flows. It's as simple as that." Western and Japanese MNCs can become players in "conjunction with Chinese partners" in this process.

The Chinese too have made a conscious effort – both symbolically and in practice – to project their new institutions as complementary to US-dominated, Bretton Woods institutions.

In April this year, the Asian Infrastructure Investment Bank (AIIB), China's flagship multilateral bank, and the World Bank agreed to "co-financing" projects together with plans to jointly finance several projects in diverse infrastructure sectors in East Asia, Central Asia, and South Asia, including in Pakistan, where the AIIB and ADB have come together to finance a road construction project.

Since May this year, the Chinese have also begun encouraging foreign MNCs already present in China to co-invest with Chinese contractors in third countries, in a sense directing mainland supply chains to new areas along with their foreign economic partners.

Although it is too soon to forecast a clear trend, the interaction of American and Chinese capital seems to have its own logic, which cannot but condition the overall Sino-American equation for the foreseeable future. The West's need to maintain a stable global economy, expand its base, and keep Asian markets growing in order to arrest its own economic problems, could witness a more complicated picture coming into being: where the old Bretton Woods order is compelled to adapt, co-exist and negotiate with Chinese ideas and institutions. At the very least, Moscow and Delhi's perceptions and management of their China relationships must continue to take account of the reality where the declining hegemon has complex material ties with Asia's emerging economic centre.

The third dynamic in the global triangle is the emerging Sino-Russian entente.

On various issues of high politics, we have seen Moscow and Beijing frame their positions in a similar fashion. Whether on US missile defense plans in North-East Asia, the Syrian conflict, or maritime disputes in the China seas we can see signs of Russia and China providing psychological and diplomatic support to each other.

Even potentially contentious issues such as their Eurasian integration plans (Russia's Eurasian Economic Union and China's OBOR) have been projected in a spirit of co-existence and mutual respect.

As Dmitry Trenin recently noted, the relationship is now guided by the principle of "never being against each other, but not necessarily always with each other." Trenin argued that this formula "puts a premium on a solid partnership between Moscow and Beijing where their interests meet, eschews conflicts where they don't, and allows a lot of flexibility where interests overlap only partially."

At first glance, one might suppose that this incipient Eurasian consolidation is being perceived similarly in the US and India. But the historical record makes clear that Washington's images on the Russia-China dyad have rarely been in congruence with Delhi's. In fact, Bowles 1964 remark to Kaul was a historical exception rather than the norm. While US and Indian policymakers have been deeply interested in Russia-China relations from the very outset of the first Cold War, each side sought different outcomes and geopolitical end-states.

For the US, Soviet containment was always the grand strategic goal, and as circumstances in the eastern bloc changed with the Sino-Soviet split, Washington adapted its China policy to hem in the USSR from its two flanks.

For Delhi, however, the Sino-Soviet split in the 1960s was defined as a strategic opportunity to counterbalance China and Pakistan in the subcontinent, a policy impulse that only grew stronger with the US-China rapprochement and normalisation in the 1970s. Ironically, many US geostrategists even today perceive the Russia-China relationship in similar terms, and would prefer to wean China away from Russia to arrest America's deteriorating global position rather than vice-versa. Delhi, of course, would prefer the opposite: to wean Russia away from China!

It should be immediately apparent that the US-Russia-China triangle contains complex and sometimes counter-intuitive dynamics, which are often obscured in Indian strategic debates. India's ability to exploit this global triangle and shape it in a direction that buttresses Indian strategic interests both in the sub-regional environment and in the extended Eurasian and Asian neighbourhood is challenging and implies a more complex and nimble geostrategy.

While both US-India and Russia-India dyads do share a common concern about China's rise, India's two great power partners formulate their foreign policies on a much larger canvas aimed at system-shaping geopolitical goals. While resisting Beijing in the Western Pacific, Washington simultaneously seeks to wean China away from Russia, and thus decelerate the power transition towards multipolarity. While Russia too is concerned about China squeezing Russian influence from parts of Eurasia, Moscow simultaneously values its global partnership with China to counter-balance the US.

A simplistic balance of power approach formulated without a critical appraisal of the global chessboard will yield little, and more likely worsen India's strategic position. For example, as I have argued previously, a hard military alignment with the US will not only diminish India's freedom of maneuver at a time of flux, it would also produce adverse geopolitical futures that are bound to complicate India's rise. Thus, the types of strategic choices Delhi makes in the larger framework guiding India's foreign policy will have ripple effects on how the global triangle manifests at the subcontinental and extended neighborhood level. Restructuring and strengthening the India-Russia relationship, as part of a larger conversation on global and regional trends, is a key step towards stabilising India's position vis-à-vis the global triangle.

'Despite Being The Emerging Economies Of The World, Intra-Trade Has Not Been High'