A Day's Not Enough

I find myself wanting to go back to Amritsar and live there for a few days, walk around its bazaars and bask in its buttery fragrance.

More from Freya Dasgupta
View All

I don't think it's even been a month that I have been back from my rather short trip to Amritsar. But I have been whining to go back. Now anyone who has been to Amritsar or knows anything about it would know that the only thing that attracts so many people to that city is the Golden Temple, one of the holiest spots for the Sikhs in India and the seat of the Akal Takht. Then of course there is the food and for some history buffs, the Jallianwala Bagh. Some hours in the city and one can cover most of it. And yet, for me those couple of hours just weren't enough. I find myself wanting to go back to Amritsar and live for a few of days, walk around its bazaars and bask in its buttery fragrance.

I have never been much of a traveller. Travelling is not one of my hobbies. I have never wanted a job that involves travelling. No matter where I am, I like coming back home to my bed, my book shelf, my kitchen. But I do have a list of places I would like to visit, not a very large one though. Amritsar has been in it for a while now and among the destinations mentioned, it is also the closest to where I live.

For a lot of people, Amritsar might be a very unlikely choice for a 'dream destination' list. But it is history that lends character to a city, makes it worth visiting, and Amritsar has witnessed enough. It is situated on the Grand Trunk road built by Sher Shah Suri which goes all the way to Peshawar. That makes Lahore only a couple of kilometres away. From the Jallianwala bagh massacre to riots during the partition in 1947 to Operation Bluestar, this city has seen some of the biggest atrocities of the last century. And contrary to popular belief that anyone or anything exposed to so much violence would turn cold and cruel, this is one of the warmest cities I have known.

And that fact hit me the moment I got off the bus. Amidst the usual rush of auto-wallahs vying with each other to get passengers, there was a man who gently asked, "bachhe, kahaan jaana hai?" My brain was mush with sleep and my eyes were still adjusting to the sudden blast of sunlight. So I stated the obvious. "Golden Temple". Lakhbir Paaji insisted that we check into a hotel first and take a shower before we head for Harmandir Sahib and he looked positively appalled when we said we had plans of doing no such thing. So a glum Lakhbir Paaji dropped us near the Golden Temple but promised to pick us up in the afternoon for Wagah. 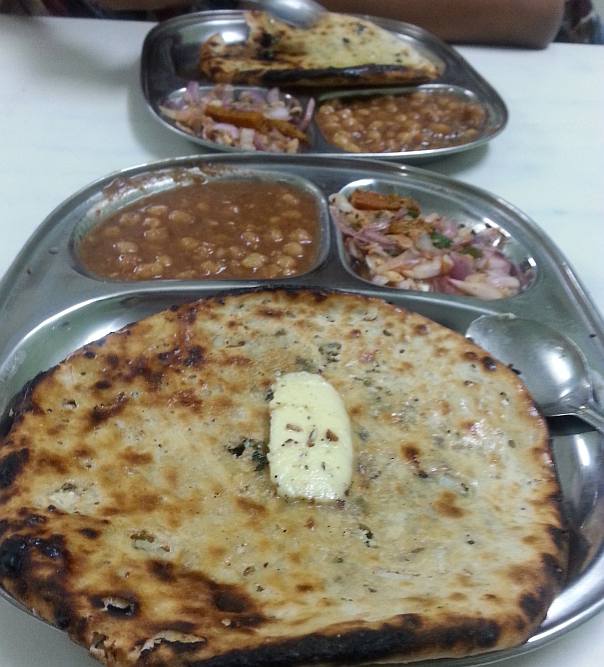 Shower or not, I needed breakfast and that in Amritsar had to be kulche. I had tried Amritsari Kulche in Delhi and never quite figured out what the big deal was about till, sitting in Amritsar, not even a kilometre away from the Golden Temple, I broke that hot kulchaa covered in melting butter with my fingers and put it in my mouth. I don't quite remember what happened after that but I think my taste buds stood up in my mouth and started whirling like dervishes. Nothing else can quite explain what good food can really do to you. Funnily, lassi, which I usually don't like much, also tasted heavenly in Amritsar.

I sat by the sarovar at Golden Temple for three hours. Doing nothing. And for those three hours, I didn't think of moving forward or about what lay behind. I didn't think philosophy or ask existential questions. I didn't pray or ask for favours. I didn't even feel religious or spiritual in anyway. But there was peace. By that I don't mean silence. Of course not. There were little kids running around, people clicking photographs, bathing, the gurbaani and amidst all this chaos, there was this quiet. This calm, the very thought of which makes me want to go back. And also the halwaa, yes.

That aside, I just want to know the city a little better. Take a walk through its alleys. Get to know the strays. Sit at a road-side stall with a cup of tea and watch a city, which is still stuck in a different age, walk by  the tangas, the people who like me aren't in a hurry to get anywhere and their sweet-sounding language.

I had been very excited about our visit to Wagah – it being the Indo-Pakistan border. It turned out to be a damp squib with overt displays of nationalism by the visitors and general sloganeering to make Modi the next prime minister.

Ever since I have been back, I have been wondering what I miss most about that city – the one that I knew just for a day but the one that made me feel like it had known me all along. Was it the scrumptious food? Or those three hours of nothingness by the sarovar? Or was it was that humbling experience of eating at the langar? Or perhaps it is something that runs deeper than all that...And a strange thought crosses my mind – Had my grandparents lived in Lahore and not in Dhaka, this would have been my city.