'...is required in India to attract foreign investment,' says the well-known NRI industrialist, who also feels that the benefits of economic progress must reach the common and poor people. 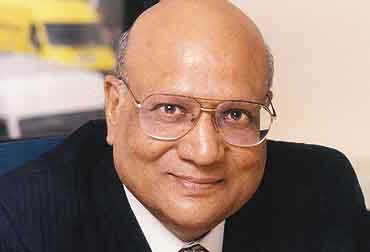 Nagendar Sharma: Does the world accept India as a growing economic power?

Swaraj Paul : Now it definitely does. If you look at India’s economic progress during the past seven years, and compare each of these year’s growth, you would find that Indian growth is unparalleled. The world has no option but to take notice of India now.

Listener from Silvasa: Sir, how can we say that India is making economic progress when the gap between the rich and poor is widening? Does that make India proud in the world and what potential of India does it show?

Swaraj Paul : The world accepts the fact that India has a potential to be a powerful nation, but this potential could only be tapped if the poor people of the country are taken on board in this economic progress, without which this hype would be meaningless. To link the economic progress with the progress of the people, a positive action is required from the government, industry and other aware sections of the society.

Nagendar Sharma: What in your view should be the priorities for all round development of the country?

Swaraj Paul : Education and health need to be given priority in India. Primary education in India has been neglected and ignored, it requires special emphasis now. It is good to note that India has four and a half million students graduating each year, but, to keep this momentum, focus of everyone from government to industry and intelligentsia, would urgently need to be on education. The expenditure on education should be increased and not curtailed. Similarly, in India many good hospitals have come up in many parts of the country, but health facilities for the rural people are virtually non-existent. There is talk about treating patients from abroad, including Britain, in Indian hospitals, but priority should be given to health services for the people of this country first.

Listener from Haryana: Sir, despite much hype about the economic progress, India is only doing well in IT sector, why not in others?

Listener from Tokyo: Sir, why has the manufacturing sector been ignored in India?

Swaraj Paul: In the  past few years, the attention in India has been focussed towards the IT sector, as a result of which, manufacturing sector has no doubt been ignored. However, there is a change now and a big realisation that if any country in the world can take on China in the manufacturing sector, it is India. The manufacturing sector is beginning to get attention here now. I would give you an example: We had set-up a single automobile parts plant in India in 1994. For some years it was functioning in a normal way. During the past three years, our turnover has increased from 60 crore rupees to three hundred crores. During the next two-three years we are aiming at a turnover of twelve hundred crores. We are now setting-up ten to twelve plants in India simultaneously

Nagendar Sharma: Could we have a job-oriented manufacturing sector in India ?

Swaraj Paul : A developed manufacturing sector is the strength of any country’s progress as it is the only sector which provides regular jobs for the work-force. All other sectors including the IT do not provide stable and permanent jobs. The example of China is for all to see that a strong manufacturing sector has taken China on a solid path of progress.

Listener from Oman : Sir how does the world view India in terms of an investment destination?

Swaraj Paul : The environment for investment has certainly improved since the earlier days, but the government and the industry should act fast to bring it to a desired level. A change in mindset is required in India to attract foreign investment in large numbers. The Indian industrial houses themselves tell the foreign players that they can succeed in India only if they enter into collaboration with an Indian name, which in my view is not a healthy practice. This is I think a way of dissuading investors by painting a grave picture even before they step in.

Look at Britain, nearly five hundred foreign companies investing there have been told the day from when their investment begins, from then on they would be known and treated as British companies and not as foreign companies. Therefore what I am saying is that India is seen as a country where big names want to invest and all efforts should be made to allow that money to come in for the country’s development, and bottlenecks should not allowed. Also, the level of corruption here needs to be checked. Reports of reputed international organisations like the Transparency International still rate India as one of the countries where corruption is high.

Listener from Florida :Sir, apart from investment, how is India viewed as a democracy in the west ?