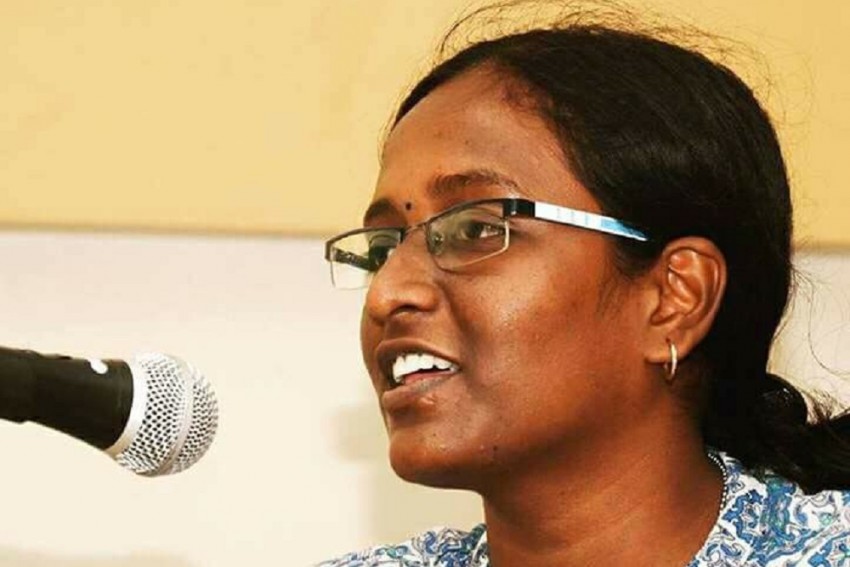 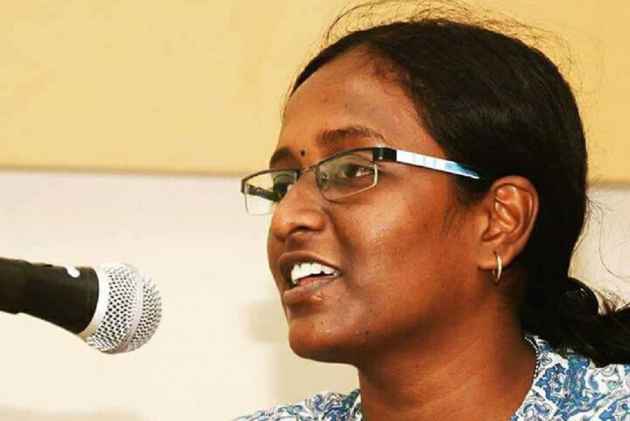 What did Kakoos (Toilet), a searing documentary exposing caste trap and government lies on manual scavenging in Tamil Nadu, get its maker? 2,000 rape and murder calls, three SIM cards, life in a hideout and arrest warrant.

What triggered the outrage against Divya Bharathi and her documentary film was the mention of Pallar, the largest Scheduled Caste group in Tamil Nadu, as one of the 10 castes whose members took up manual scavenging to make a living.

Caste leaders found it insulting that the documentary took the name of the ancient agrarian community in the same breath as that of other castes whose members take up manual scavenging, an occupation that makes them untouchable for many.

Bharathi, in an interview to Outlook from her hideout, spoke about how she was drafted into the fight for manual scavengers, the insensitivity of Dalit and Left leaders.

What prompted you to make a documentary on manual scavengers?

I have been a CPI(ML) party worker since 2008. In the last 8 years, I have been part of a lot of struggle and protests. But the issue of the sanitary worker never crossed my mind all these years. Manual scavengers were an unseen entity even for a person like me focusing on women, Dalit and student causes. In 2015 October, 2 labourers died after inhaling poisonous gas while cleaning a septic tank. I participated in the protest at the Madurai GH. And it went on for 3 days. That incident is the trigger for the Kakoos documentary.

There were similar deaths earlier also.

Yes, I have seen a lot of news on septic tank deaths. I skimmed through all those news. But it was for the first time I was participating in the protest over the death of a sanitary worker and seeing around 1000 sanitary workers together at Government hospital. Wife of one of the victims was of my age, just-married. Her heartrending cries hugging her husband’s dead rotten body set my mind on fire. I decided I need to do something on this.

All parties, Left, Dalit groups, were part of the protest. The party men asked me to draft a petition. They thought that since I was a law student, I was better equipped. But I knew nothing of the 1993 or 2013 Acts, the Supreme Court judgment ordering 10 lakh compensation. I knew no details. Then I read up, spoke to my seniors and drafted the complaint. The 3-day struggle was a failure because though they agreed to the 10-lakh compensation, the death was registered as a suspicious death.

You were arrested recently based on a long-dead 2009 case of college protest. Is that because you exposed the Tamil Nadu government through your documentary?

Not just that. In my documentary, I had listed 10 castes, including Pallar, whose members are involved in manual scavenging. It upset K. Krishnasamy of Puthiya Tamilagam, mainly representing the Scheduled Caste (SC) Dalit subgroup Pallar. He was upset that his caste was named. Krishnasamy has moved ahead economically and socially and he thinks it is damaging for this reputation, and I named his caste in the documentary on purpose. He says Pallars have progressed. They should be now in the OBC list, not SC.

Seven months after the documentary, on July 27, he threatened to file a case against me saying the documentary defames his community. Then my phone number was made public on Facebook and other social media. After this public threat, I received around 2000 calls abusing and threatening to rape and kill me. Then I had to take a new number and move out to a safe place.

He emerged as a Dalit leader but now is an ally of BJP. He welcomed the beef ban, welcomed NEET exam and held a meeting welcoming Amit Shah in Madurai.
What percentage of manual scavengers are Pallars?

There are at least 10 castes involved in manual scavenging, and Pallars, too, are part of it in many places. As a quid pro quo for not filing a case against me, Krishnasamy wanted me to remove reference to Pallar in the video, apologise and take down the video.

I went to the Police, got no response, went to the cyber cell, nothing came out of it. The women wings of all Left parties filed a joint petition with the DGP in Chennai, but it too evoked no response. But when Krishnasamy gave a complaint, there was prompt action against me and they registered an FIR under non-bailable sections. An arrest warrant has been issued against me. They have filed a complaint in 12 cities of Tamil Nadu against me.

Here is the documentary:

How many Manual scavengers are there in Tamil Nadu?

The 1993 act is a total failure. Not a single FIR has been registered between the 1993 and 2013. The government is refusing to admit the presence of manual scavengers. If they admit, they would have to spend money to rehabilitate them under the 2013 Act. If they admit there are 1000 manual scavengers, they have to show documents of their rehabilitation. That’s why they have been giving false count. The government in 2015 gave a number saying there are only 462 manual scavengers in TN. We filed a case in the Madras High court asking for a recount. During the recount in 2016, the number came down to 339.

What stops the government from rehabilitating them?

Distribution of production gear has been given out to contractors. They have everything, but contractors are not distributing. Sanitation was privatized in 1991, and that’s the bane.

What is stopping these caste members from coming out of the jobs that have been traditionally thrust upon them?

If they come out, there is no economic, social security for them. If they demand production gear, the contractors will throw them out. Where will they earn the Rs 150 they get daily by cleaning the streets? Nobody will even accept them for other jobs because of their identity as a sanitation worker.

You haven’t spared Ambedkarites or Left parties in your film. Do you identify yourself by any caste?

I am ML party worker, I have no caste. All I can say, to quell questions around my belief, is I am a non-Dalit. The Left view the problem of manual scavenging through the prism of trade unionism and are ignoring the caste oppression in it. They spotlight the economic demands. Dalit parties have junked caste annihilation from the agenda and are going after power.
Among sanitary workers, the prevalent caste is Arundhatiyar. (Pallar, Parayar and Arunthathiyar are the three major Dalit groups in the state of Tamil Nadu). The most popular Dalit leader in Tamil Nadu is Thirumavalavan of the Viduthalai Chiruthaigal Katchi. VCK is seen as a representative of the strong Paraiyar community. None of the Dalit leaders speak about abolishing manual scavenging.

Are you worried of the mounting cases that are being filed against you in 32 districts?

I am sure they will be quashed just like the actor Kushboo case. It is a well-organised political attack by the BJP by using Krishnasamy. The BJP is trying hard to woo the Dalit parties, and towards that end, Krishnaswami is their weapon.