Falsehoods ranging from exaggeration to plain untruth were used to make the case for 'war' on Iraq. More lies are being used in the aftermath. 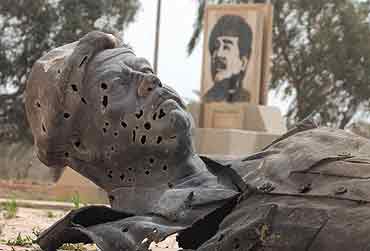 1 Iraq was responsible for the 11 September attacks

A supposed meeting in Prague between Mohammed Atta, leader of the 11 September hijackers, and an Iraqi intelligence official was the main basis for this claim, but Czech intelligence later conceded that the Iraqi's contact could not have been Atta. This did not stop the constant stream of assertions that Iraq was involved in 9/11, which was so successful that at one stage opinion polls showed that two-thirds of Americans believed the hand of Saddam Hussein was behind the attacks. Almost as many believed Iraqi hijackers were aboard the crashed airliners; in fact there were none.

2 Iraq and al-Qa'ida were working together

Persistent claims by US and British leaders that Saddam and Osama bin Laden were in league with each other were contradicted by a leaked British Defence Intelligence Staff report, which said there were no current links between them. Mr Bin Laden's "aims are in ideological conflict with present-day Iraq", it added.

Another strand to the claims was that al-Qa'ida members were being sheltered in Iraq, and had set up a poisons training camp. When US troops reached the camp, they found no chemical or biological traces.

The head of the CIA has now admitted that documents purporting to show that Iraq tried to import uranium from Niger in west Africa were forged, and that the claim should never have been in President Bush's State of the Union address. Britain sticks by the claim, insisting it has "separate intelligence". The Foreign Office conceded last week that this information is now "under review".

The US persistently alleged that Baghdad tried to buy high-strength aluminum tubes whose only use could be in gas centrifuges, needed to enrich uranium for nuclear weapons. Equally persistently, the International Atomic Energy Agency said the tubes were being used for artillery rockets. The head of the IAEA, Mohamed El Baradei, told the UN Security Council in January that the tubes were not even suitable for centrifuges.

Iraq possessed enough dangerous substances to kill the whole world, it was alleged more than once. It had pilotless aircraft which could be smuggled into the US and used to spray chemical and biological toxins. Experts pointed out that apart from mustard gas, Iraq never had the technology to produce materials with a shelf-life of 12 years, the time between the two wars. All such agents would have deteriorated to the point of uselessness years ago.

6 Iraq retained up to 20 missiles which could carry chemical or biological warheads, with a range which would threaten British forces in Cyprus

Apart from the fact that there has been no sign of these missiles since the invasion, Britain downplayed the risk of there being any such weapons in Iraq once the fighting began. It was also revealed that chemical protection equipment was removed from British bases in Cyprus last year, indicating that the Government did not take its own claims seriously.

7 Saddam Hussein had the wherewithal to develop smallpox

This allegation was made by the Secretary of State, Colin Powell, in his address to the UN Security Council in February. The following month the UN said there was nothing to support it.

8 US and British claims were supported by the inspectors

According to Jack Straw, chief UN weapons inspector Hans Blix "pointed out" that Iraq had 10,000 litres of anthrax. Tony Blair said Iraq's chemical, biological and "indeed the nuclear weapons programme" had been well documented by the UN. Mr Blix's reply? "This is not the same as saying there are weapons of mass destruction," he said last September. "If I had solid evidence that Iraq retained weapons of mass destruction or were constructing such weapons, I would take it to the Security Council." In May this year he added: "I am obviously very interested in the question of whether or not there were weapons of mass destruction, and I am beginning to suspect there possibly were not."

Tony Blair told this newspaper in March that the UN had "tried unsuccessfully for 12 years to get Saddam to disarm peacefully". But in 1999 a Security Council panel concluded: "Although important elements still have to be resolved, the bulk of Iraq's proscribed weapons programmes has been eliminated." Mr Blair also claimed UN inspectors "found no trace at all of Saddam's offensive biological weapons programme" until his son-in-law defected. In fact the UN got the regime to admit to its biological weapons programme more than a month before the defection.

10 Iraq was obstructing the inspectors

Britain's February "dodgy dossier" claimed inspectors' escorts were "trained to start long arguments" with other Iraqi officials while evidence was being hidden, and inspectors' journeys were monitored and notified ahead to remove surprise. Dr Blix said in February that the UN had conducted more than 400 inspections, all without notice, covering more than 300 sites. "We note that access to sites has so far been without problems," he said. : "In no case have we seen convincing evidence that the Iraqi side knew that the inspectors were coming."

This now-notorious claim was based on a single source, said to be a serving Iraqi military officer. This individual has not been produced since the war, but in any case Tony Blair contradicted the claim in April. He said Iraq had begun to conceal its weapons in May 2002, which meant that they could not have been used within 45 minutes.

Mr Blair told the Commons in February, when the dossier was issued: "We issued further intelligence over the weekend about the infrastructure of concealment. It is obviously difficult when we publish intelligence reports." It soon emerged that most of it was cribbed without attribution from three articles on the internet. Last month Alastair Campbell took responsibility for the plagiarism committed by his staff, but stood by the dossier's accuracy, even though it confused two Iraqi intelligence organisations, and said one moved to new headquarters in 1990, two years before it was created.

13 War would be easy

Public fears of war in the US and Britain were assuaged by assurances that oppressed Iraqis would welcome the invading forces; that "demolishing Saddam Hussein's military power and liberating Iraq would be a cakewalk", in the words of Kenneth Adelman, a senior Pentagon official in two previous Republican administrations. Resistance was patchy, but stiffer than expected, mainly from irregular forces fighting in civilian clothes. "This wasn't the enemy we war-gamed against," one general complained.

The fall of Iraq's southernmost city and only port was announced several times before Anglo-American forces gained full control - by Defence Secretary Donald Rumsfeld, among others, and by Admiral Michael Boyce, chief of Britain's defence staff. "Umm Qasr has been overwhelmed by the US Marines and is now in coalition hands," the Admiral announced, somewhat prematurely.

Claims that the Shia Muslim population of Basra, Iraq's second city, had risen against their oppressors were repeated for days, long after it became clear to those there that this was little more than wishful thinking. The defeat of a supposed breakout by Iraqi armour was also announced by military spokesman in no position to know the truth.

16 The "rescue" of Private Jessica Lynch

Private Jessica Lynch's "rescue" from a hospital in Nasiriya by American special forces was presented as the major "feel-good" story of the war. She was said to have fired back at Iraqi troops until her ammunition ran out, and was taken to hospital suffering bullet and stab wounds. It has since emerged that all her injuries were sustained in a vehicle crash, which left her incapable of firing any shot. Local medical staff had tried to return her to the Americans after Iraqi forces pulled out of the hospital, but the doctors had to turn back when US troops opened fire on them. The special forces encountered no resistance, but made sure the whole episode was filmed.

As US forces approached Baghdad, there was a rash of reports that they would cross a "red line", within which Republican Guard units were authorised to use chemical weapons. But Lieutenant General James Conway, the leading US marine general in Iraq, conceded afterwards that intelligence reports that chemical weapons had been deployed around Baghdad before the war were wrong.

"It was a surprise to me ... that we have not uncovered weapons ... in some of the forward dispersal sites," he said. "We've been to virtually every ammunition supply point between the Kuwaiti border and Baghdad, but they're simply not there. We were simply wrong. Whether or not we're wrong at the national level, I think still very much remains to be seen."

18 Interrogation of scientists would yield the location of WMD

"I have got absolutely no doubt that those weapons are there ... once we have the co-operation of the scientists and the experts, I have got no doubt that we will find them," Tony Blair said in April. Numerous similar assurances were issued by other leading figures, who said interrogations would provide the WMD discoveries that searches had failed to supply. But almost all Iraq's leading scientists are in custody, and claims that lingering fears of Saddam Hussein are stilling their tongues are beginning to wear thin.

Tony Blair complained in Parliament that "people falsely claim that we want to seize" Iraq's oil revenues, adding that they should be put in a trust fund for the Iraqi people administered through the UN. Britain should seek a Security Council resolution that would affirm "the use of all oil revenues for the benefit of the Iraqi people".

Instead Britain co-sponsored a Security Council resolution that gave the US and UK control over Iraq's oil revenues. There is no UN-administered trust fund.

Far from "all oil revenues" being used for the Iraqi people, the resolution continues to make deductions from Iraq's oil earnings to pay in compensation for the invasion of Kuwait in 1990.

After repeated false sightings, both Tony Blair and George Bush proclaimed on 30 May that two trailers found in Iraq were mobile biological laboratories. "We have already found two trailers, both of which we believe were used for the production of biological weapons," said Mr Blair. Mr Bush went further: "Those who say we haven't found the banned manufacturing devices or banned weapons - they're wrong. We found them." It is now almost certain that the vehicles were for the production of hydrogen for weather balloons, just as the Iraqis claimed - and that they were part of a system that was originally exported by Britain.

This is essentially drawn from Glen Rangwala's original article titled The Thirty-Six Lies That Launched A War. An earlier version of this article appeared in The Independent of London.

'There Was A Consensus On The Dates Of The Summit...'