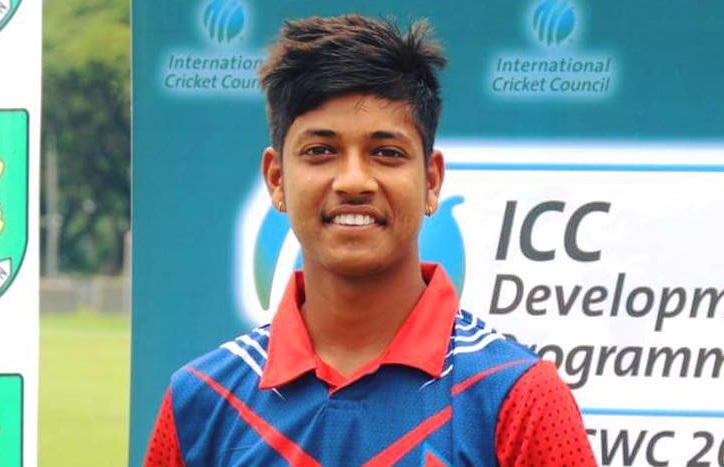 Sandeep Lamichhane on Sunday became the first cricketer from Nepal to land a deal an IPL contract when he was picked by Delhi Daredevils in the ongoing players auction here.

The 17-year-old, the only Nepal player in the IPL auction, was sold at his base price of Rs 20 lakh.

The leg-spinner rose to prominence with a successful outing at the 2016 U-19 World Cup where he guided Nepal to a creditable eighth place.

He hogged the limelight by becoming the second-highest wicket-taker in the tournament with 14 scalps in six innings at an average of 17 and an economy of 4.67.

Sandeep had scalped five wickets in two warm-up games and was also part of Nepal's first match against New Zealand, which they won by 32 runs.

However, his moment of glory awaited him in the next match against Ireland when Sandeep took a hat-trick, becoming only the fifth bowler in history to achieve the feat in the under-19 World Cup.

His five-wicket haul helped Nepal notch up an eight- wicket win over Ireland and enter the knockout stages for the second time in their seventh World Cup appearance.

Sandeep's performance caught the attention of former Australian captain Michael Clarke, who picked the teenager to play alongside him for Kowloon Cantoons in the Hong Kong T20 Blitz.

Later Clarke also invited the leg-spinner to play for his team Western Suburbs in the NSW Premier Cricket season in Australia.

Born in Syangja, Sandeep had spent two-three years in India as a child when his father was working in the Indian railways.

During his stay in India, Sandeep got exposed to Indian cricketer such as legendary Sachin Tendulkar and Rahul Dravid. He was also inspired by Australian spin great Shane Warne.