Virat Kohli could not resist himself from meeting Charulata Patel, an 87-year-old Indian fan, and called her one of the most passionate and dedicated fans, he has ever seen or met. The 87-year old caught everyone's eye, when she was seen ardently cheering for the Indian Team, when the team was batting against Bangladesh during their World Cup on Tuesday. Kohli met Patel after the match and shared pictures with the fan on his Twitter handle. India went on to win the match as they defeated Bangladesh by 28 runs. With the victory, India have sealed their semi-final spot as they have now 13 points and consolidated their second position on the points table. India will now compete against Sri Lanka on July 6.
Virat Kohli Cricket  Cricket World Cup 2019  ICC Cricket World Cup 2019 Sports
more videos >>
THE LATEST ISSUE 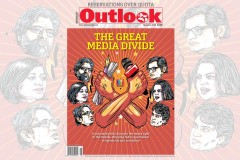