Priyanka Gandhi Vadra was on Friday detained by the Uttar Pradesh police in Mirzapur while she was on her way to a village in Sonbhadra, where 10 people were killed over a land dispute. The Congress General Secetary, who was scheduled to go to Sonbhadra after meeting the victims at Varanasi, was stopped in Mirazapur, following which she staged a sit-in along with party workers and leaders.
Priyanka Gandhi Vadra Uttar Pradesh  Muzaffarpur Congress National
more videos >>
THE LATEST ISSUE 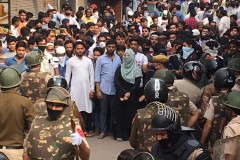