LS Polls: Preparation Of 'Laddu’ On Full Swing Ahead Of Result Day

The preparation of ‘laddu’ is on full swing ahead of the counting day of Lok Sabha Elections 2019. Several sweet shops have been ordered to prepare ‘laddu’ in abundance in Punjab’s Ludhiana ahead of the elections result. Party workers and supporters of Congress, Bharatiya Janata Party (BJP) and Shiromani Akali Dal (SAD) are excited before the results will be announced. While speaking to ANI, President of the Punjab Halwai Association Narinder Pal Singh said, “We have received orders mainly from two political parties i.e, BJP-SAD and Congress. Around 10 to 12 quintals of orders we have received by now from both the parties. The orders have been coming in right after the exit polls.” The Lok Sabha elections were held in seven phases across the nation. The results of the polls will be declared on May 23.
Punjab Lok Sabha Election 2019 Results National
more videos >>
THE LATEST ISSUE 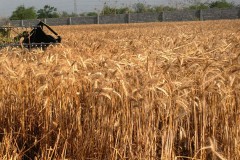