It’s not just a matter of props and attachments. There are extra weights, and stronger rims and spokes. 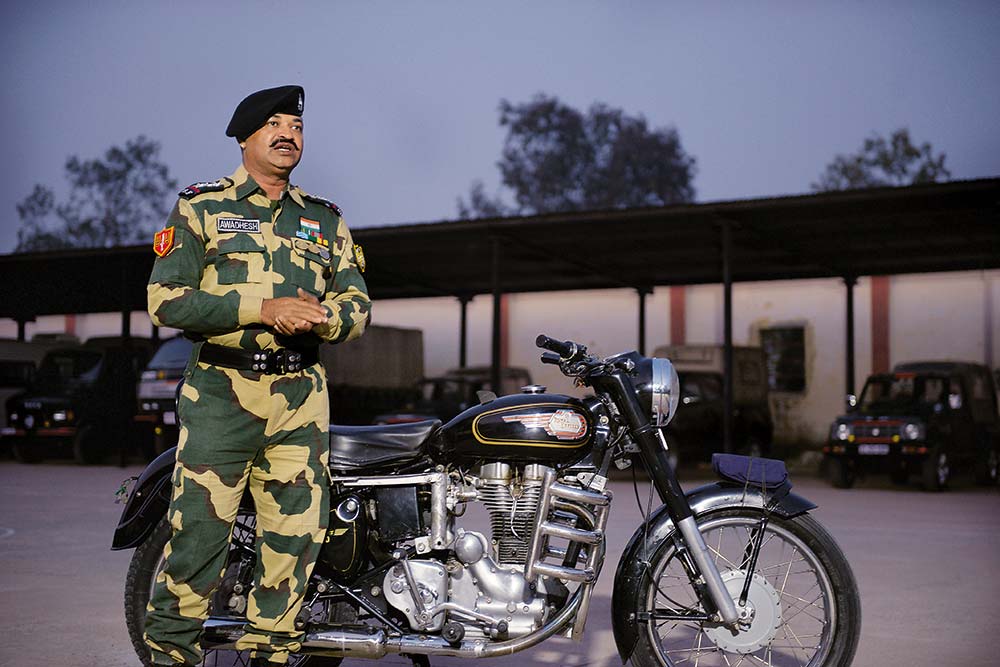 As the sun sets over the horizon, and sky grows dark, the BSF Janbaz team lines up a few bikes to explain how the Royal Enfield Bullets are modified for its stunts. To outsiders, they look like normal bikes with a few props and attachments, some white and others black. But when Awadhesh Kumar Singh, team leader, explains the intricacies, it opens a whole new world. “There are dozens of modifications, but mostly on the chassis. The engines are generally untouched. I will explain some of them to you,” he says.

For example, extra weights were attached to a couple of bikes. They were wrapped in black cloth, attached to the frame of the front tire. They were bricks on vehicles where the rider stands on a pole or a ladder, both 16 feet 5 inches in height, and controls the vehicle with the prop, his legs, and shifts in his angle. When the rider is perched so high, the centre of gravity shifts backwards, and there is tendency for the front tire to leave the ground that results in bumps. The weights help to shift the centre of gravity forward to stabilise the bikes.

One of the bikes was dubbed as the Jaguar. It had two flattened layers of plates on each side, and another one in the centre. They were meant for five pillions to lie down on them, each one holding a flag, like the national tricolour or the BSF one. Along with the rider, and five additional ones, it seems that it is a flying combination of aircraft. Another vehicle had a black clamp on each side for two members to stand on them, and carry one each on their shoulders. The clamp was heavy and big enough to support the additional weight, and prevent the feet from slipping due to vehicular vibrations. 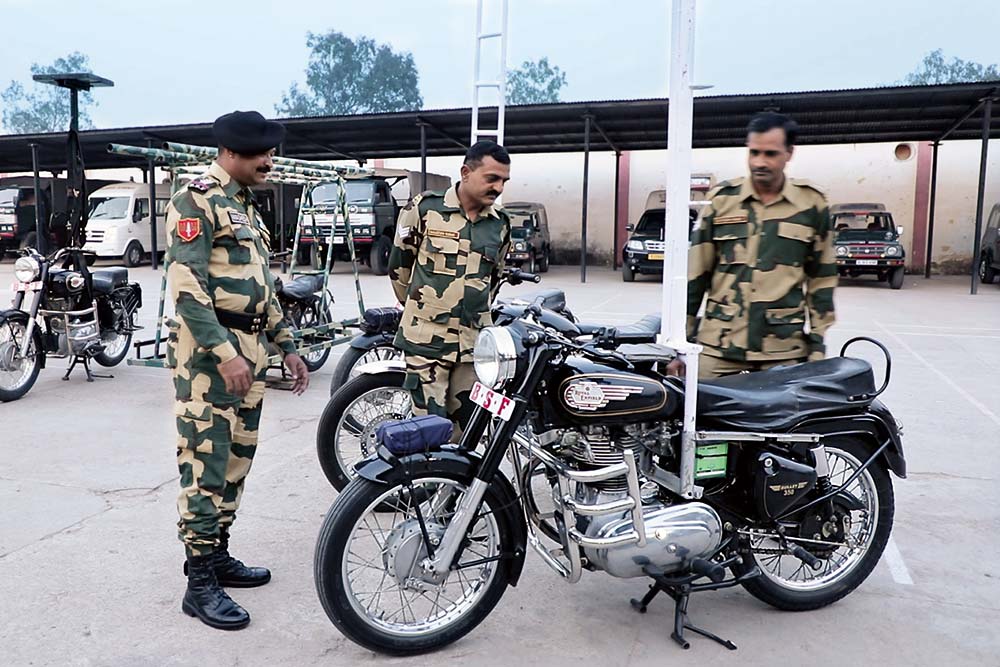 There were several normal Royal Enfield Bullets (350cc), which were meant to form large human pyramids. In one of the stunts that the team performed on Raj Path during one of the Republic Day parades, nine such Bullets were used to form a pyramid of 60 people. “We could have used more, but Raj Path is wide enough for only nine bikes to be placed next to each other,” explains Awadhesh. He also shows a bike with a smaller ladder.

Given the weights of dozens of men and women that some of the bikes need to carry, the tires need further experimentation. In many cases, the rims and spokes of the wheels are strengthened through thicker metal, and heavy nuts and bolts. It is easy for the rims to bend on a regular basis. And if have wondered how the bikes travel at constant speeds during displays, there is a simple trick attached to it. A wet, white, and slightly thick thread is wound around the accelerator, which keeps it in the same position.

However, the highlight of the trip to Gwalior to meet the team members, and watch their stunts, was the jump through a fire on one of the evenings. A wall of glass tubelights, dozens of them, is formed in front of a ring, which is set on fire. The rider goes over a wooden plank incline, crashes into glass, and drives through the ring. It is dangerous, not just because of the accuracy, but also because the glass fragments tend to get into the face, neck, and arms. Hence, during this stunt, Awadhesh used a full-face helmet to cover his face, and a thick zipped jacket to protect the other parts.

Given the modifications on the bikes, and the fact that the machine has to be in complete harmony with the rider during the displays, there is a great connect between the two. There is a permanent staff of 7-8 members, who look after the dozens of Royal Enfield Bullets of the Janbaz team, as well as the Seema Bhawani one, which is the BSF all-women team. During practice, and before specific events, there are two maintenance hubs. The first is for temporary repairs to ensure quick turnaround time. The second, a permanent facility for all kinds of vehicles, including trucks, is for extreme damages.

As we spent more than two days with the Janbaz, we were left wondering about one thing. Every bike that we examined, and from different angles, we could not find a single speck of dust on them, or a drop of oil and grease in the engine area. Everything was spick-and-span, the black and white metal shone as if the machine has just been taken out of a showroom. As Bullet enthusiasts, we found it intriguing, especially when we thought about the hours that we spent to clean our machines­­—and mostly in vain..