As tourists hit Mumbai clutching copies of Shantaram, and set off on a tour of all the places made famous by the book, our correspondent follows the trail 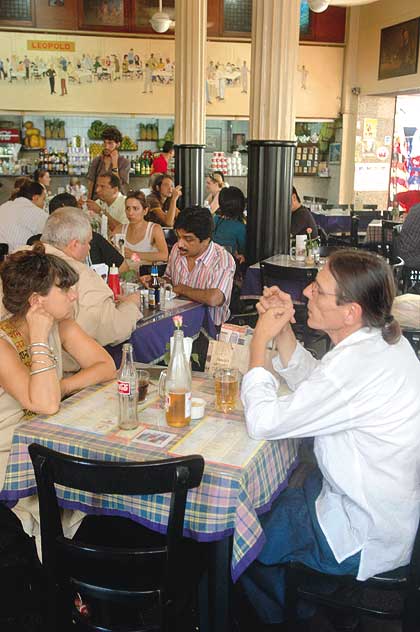 Two neat stacks of a red-and-blue novel sit upon the counter in front of Bernard Coelho, the harried manager of Colaba’s Leopold Cafe. Leopold’s—as the 30-year-old cafe is affectionately known by locals and tourists alike—owes its renewed fame to an Australian convict with flowing blonde hair whose almost 1,000-page novel is now an international literary sensation.

"We sell autographed copies of Shantaram," says Coelho proudly, opening up the first page. In the flowing, expansive handwriting of author Gregory David Roberts, who based the book loosely upon his eight years in Mumbai in the ‘80s, the message reads: "Love the truth you find in the hearts of others, and always listen to the love that speaks from your own heart."

Here, in the cool environs of Leopold’s, with its tiled floor and fast-whirring fans, tourists come, clutching their dog-eared Shantaram copies, hoping for a glimpse of the cafe where the author spent so much of his time. They leave messages for 'Shantaram'—as Roberts is now known—tiny handwritten remarks, or visiting cards, even a telephone number on a small slip of paper. And then they step out, onto the busy Colaba Causeway, to see Mumbai his way. 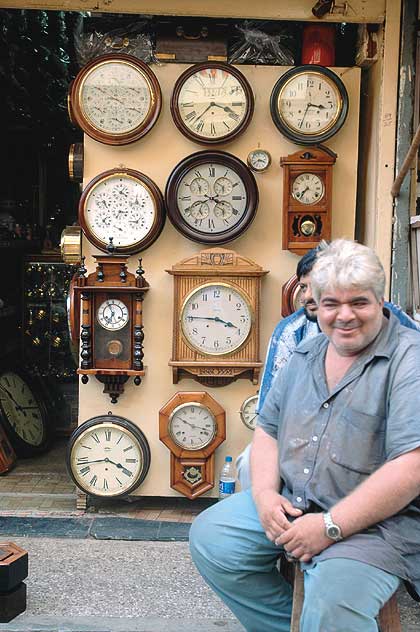 The "Shantaram trail" leads us past where the "traders in the street stalls outside sold counterfeits of Lacoste, Cardin and Cartier with a certain impudent panache" to the taxi-stand. The driver of our black-and-yellow taxicab—what Shantaram nicknamed a "Bumblebee"—weaves in and out of traffic as his whim dictates, honking vengefully. 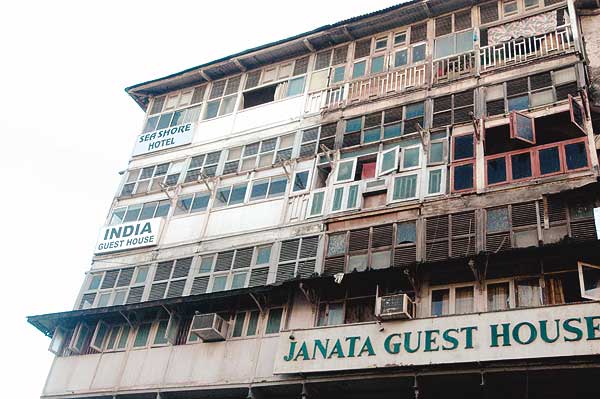 We go past the Gateway of India following a path oft taken by Shantaram, along the sea wall, as he walks home the woman he has fallen hopelessly in love with: the green-eyed Karla. The boats stand in the harbour, catching the sun. Whitewashed villas with wooden balconies overlook yellow gulmohar trees in full bloom. At the end of the road, past the Radio Club, India Guest House comes into view. The sign desultorily points out the fourth floor of a ramshackle building, most of its windows broken, curtains billowing outward. This is where Shantaram puts up in the book. 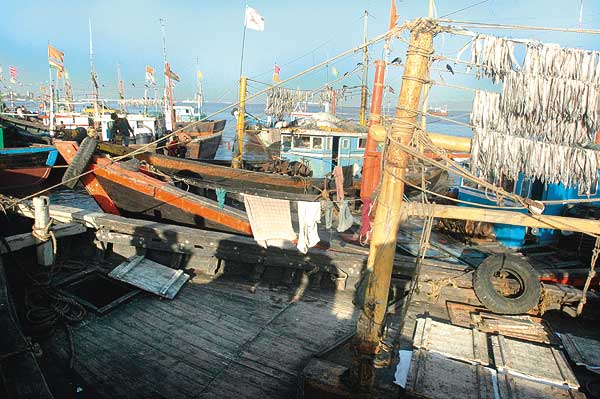 We move on to the Sassoon Docks, where the smell of prawns makes our stomachs flip, as Shantaram’s once did. Bright-yellow oil tankers are parked carelessly; giant slabs of ice slide off trucks to be crushed and shovelled into boxes; rows of candy-coloured barges look out to sea wistfully; and upon a few, grey strips of ribbon fish are hung out to dry like last year’s laundry. It is these pennants of ribbon fish that Mumbai’s fishing community will feast on when the monsoon rolls in and the taste of fresh catch fades to a fond memory. 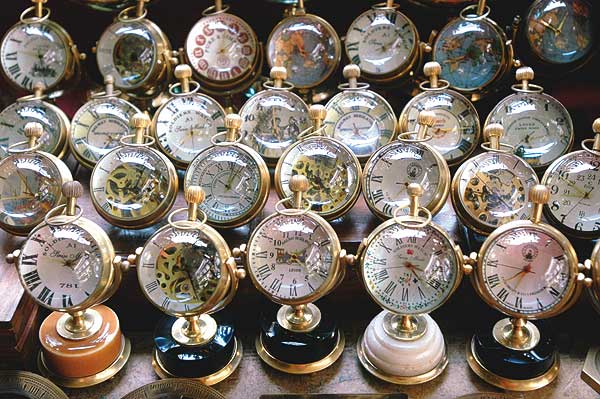 "I’ve never read this book," says our taxidriver, curious. "But for Rs 1,000, I’ll carry an ad for the book along the side of my cab, for one whole year." He looks disappointed when we turn down his business proposal, but agrees to take us on to Chor Bazaar. Time, dust and silence hang heavy here, except for the sound of a hard-bristled broom sweeping the ground. 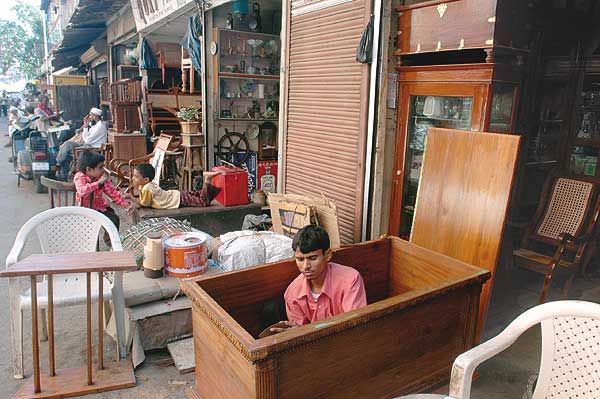 In shaded bylanes, dusty curiosity shops sell almost anything—grandfather clocks, old cameras, sepia-tinted photographs of somebody’s sweetheart, painted doorknobs, bright handi lamps, a mandolin.... A customer squints through an eyeglass; a man sits inside a wooden trunk, polishing it to smoothness. A pair of stray goats sniff at an old bicycle, wondering whether it can be eaten.

After the stillness of Chor Bazaar, the gust of ocean wind comes as a shock when the taxicab hits Marine Drive. Lovers perch upon the parapet overlooking the ocean; and pigeons cluster around the last grains of their morning feed. The ocean road sweeps down to Chowpatty, where the white beach dazzles in the afternoon sun. Boats stand moored just off the shore, dwarfed by the city’s soaring skyline. 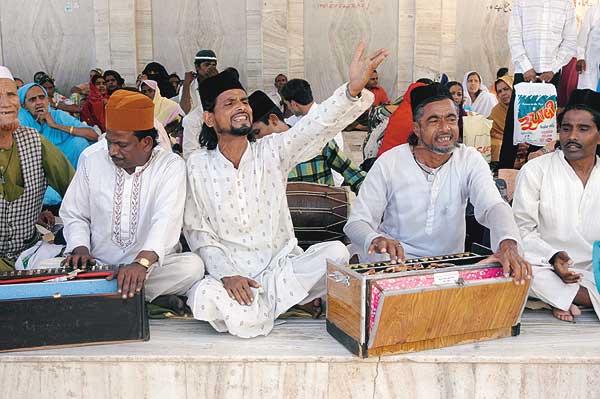 Our trail ends at the Haji Ali Dargah. Shantaram sees it by night, describing it as a "mystic ship" in the light of the moon. The dargah sits upon an island, connected to the mainland by a stone path that is submerged in high tide. Outside, in small shops, green and red blankets for "Baba", the saint of the dargah, flutter in the breeze, their gold trim glinting. Street urchins strip to their underwear, launching into the water with a defiant splash. The air is filled with the unmistakable scent of kababs cooking. And a boat bobs uncertainly off the stone causeway, like a man without faith.

There are separate entrances to the dargah for men and women. Inside, the fragrance of attar mixes with the musky odour of sweat; female pilgrims with their heads covered clamour for a glimpse of the "baba"; the priest touches them upon the head with a bunch of peacock feathers, then sternly urges them to move back. Outside, the white marble floor scorches the feet without mercy. Four men in black skullcaps and orange hennaed beards perform a vigorous qawaali on two beaten-down harmoniums and a tambourine with most of its bells missing.

Their songs still ringing in our ears, we head back to the busy traffic junction—and a young girl approaches with her arms full of Shantaram copies. "Ekdum mast story hai, madam," she urges. I smile and nod. I know.

Kendriya Sainik Board officials pin a flag on...

If I Were Rain